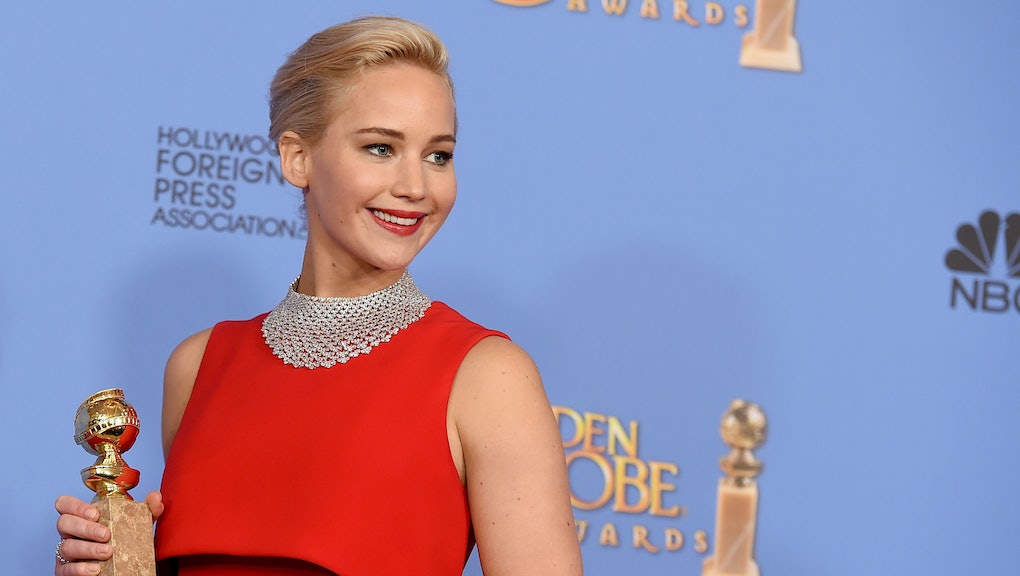 We Have Reached Peak Jennifer Lawrence

If you listened closely Sunday night as Jennifer Lawrence accepted her third Golden Globe in four years, you could hear the faint sound of a queen being dethroned.

Clad in the same color red that she wore for her first Oscars back in 2011, Lawrence appeared onstage twice. The first time was to present an award with her newfound BFF and writing partner Amy Schumer. The second was accepting said Golden Globe in a victory over Schumer, who was primed to cap an incredible year. (Last year, Lawrence won the Globe over eventual Oscar winner Lupita Nyong'o.)

After her win, Lawrence went backstage to talk to the press. One reporter — a member of the foreign press — was asking a question about seeing herself on-screen. Apparently, he was looking at his phone to read the question. Lawrence wagged a finger at him.

"You can't live your whole life behind your phone, bro," she said. "You can't do that. You've got to live in the now." It would seem to be a joke, but Lawrence wasn't laughing. He then continued his question, referencing the Oscars instead of the Golden Globes.

"We're at the Golden Globes," she said, again without a laugh or smile. "If you put your phone down, you'd know that."

News of Lawrence's phone-shaming was quickly circulated as Lawrence calling the reporter out and shutting him down. The backlash on Twitter was less supportive of the actress.

How did Lawrence go from beloved star to recipient of the latest wave of backlash seemingly in one night? The truth is that she didn't — this has been a long time coming, and part of a pattern that extends far beyond her. The Globes just happened to serve as the final blow.

Last year was a rocky one for Lawrence. Other than her friendship with Schumer, which was breathlessly covered by online news outlets far and wide, most of her work wasn't a huge success. The Hunger Games: Mockingjay, Part 2 disappointed at the box office, while her newest David O. Russell movie Joy got mixed reviews. Instead of taking some space and growing, she insisted that she'll never stop working with Russell.

Suddenly Lawrence, a 25-year-old actress with all her best years ahead of her, feels stale. Is she really done growing so soon? At this point, with three Golden Globes, an Oscar and $52 million under her belt, what else does she need?

When Lawrence showed up to that first Oscar ceremony in that striking red Calvin Klein dress, she was an exciting new star. She was nominated for Winter's Bone, still just in talks to play Katniss Everdeen. Nominated against Natalie Portman for Black Swan and Annette Bening for The Kids Are All Right, she had no chance to win. But on that red carpet, a stunning new star, she captured something way better than gold. She captured attention.

Now, that attention has drifted to new stars like Brie Larson and Rachel Bloom. When Larson won the Globe for best actress in a motion picture, drama, she promised she'd write thank-you cards to anyone she forgot in her acceptance speech. It was the kind of adorable, "real girl" moment that seems straight out of Lawrence's playbook. Remember when she tripped accepting her Oscar? Now, it's Larson earning the kudos as Lawrence wags her finger at reporters backstage.

None of this is Lawrence's fault. This is how Hollywood works. Actresses are hot one second and annoying the next. Anne Hathaway, Gwyneth Paltrow and Kate Winslet can empathize.

In fact, Winslet winning her own third Globe Sunday night was an interesting bit of parallelism: Winslet went away for a few years after her award-winning run in 2009. Then, she was seen as too needy for it, even telling herself to "gather" after winning her second of the night. This year, she was pleasantly surprised to win for Steve Jobs.

It's a tremendously unfair cycle for actresses. We certainly don't ask men to go away when they want awards too badly (hello, Leonardo DiCaprio). Lawrence shouldn't have to pull an Adele every few years just to cool the heat. She's still our biggest movie star, and should be able to work as an actress without fear of mounting backlash.

That said, there are two major ways to fix the cycle. First, the media has to stop putting such pressure on one actress at a time. There are dozens of tremendous young stars to focus on, from Bloom to Larson to Gina Rodriguez to Tessa Thompson to Saoirse Ronan to Mya Taylor to Gugu Mbatha-Raw to Rooney Mara. Give them their kudos; certainly they must have internet-catnip friendships as well. Look, here's Rodriguez with Tumblr's newest boyfriend Oscar Isaac:

Second, Lawrence needs to continue to challenge herself as an actress. Go beyond franchises and Russell movies. Live up to the promise she showed years ago in Winter's Bone and on that 2011 red carpet. Wagging her finger at foreign reporters isn't the way to win over fans; the work is. If she redoubles her efforts to not just be a star, but a fine performer, she'll get the crowd on her side again.

Yes, last night was a dethroning. Lawrence will never again be the hottest star of the moment; that's not how Hollywood works. The industry is about who's new. Yet if all goes well, she'll be a beloved actress and star for years to come. This may be peak Jennifer Lawrence, but that doesn't mean it's also her end.