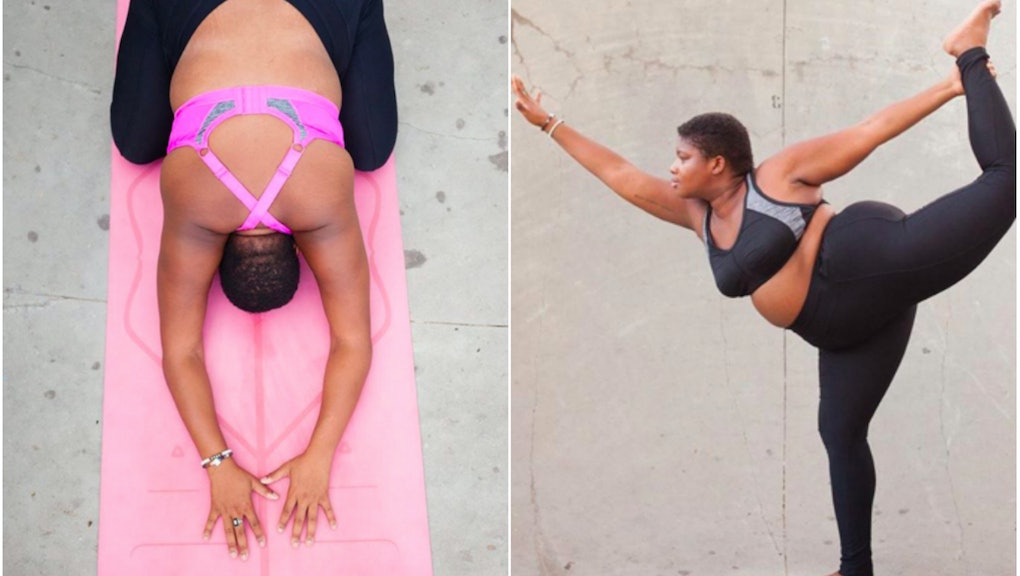 Jessamyn Stanley isn't afraid to call it how it is. Due to her bigger size, the yoga teacher and self-proclaimed "Fat Femme" has built a sizable fan base on social media by breaking stereotypes about who can practice yoga.

The first stereotype she's soundly broken: No, yoga enthusiasts aren't all ultra-slender women who rock Lululemon all day (which, coincidentally, also has been guilty itself of fat-shaming).

There's another piece of BS surrounding yoga, though, that Stanley would like to break: That living a yoga lifestyle is all peace and sunshine and enlightenment all the damn time. It's a serene myth, one peddled over social media.

"Everyone feels like they need to project this idea of perfection and beauty and 'Be the light' — that's my favorite quote, because I think it's such bullshit. It's like, 'Be the light,'" Stanley said at a recent panel talk, waving her hand in mock enthusiasm. "They're saying all this stuff that is about positivity — whatever, but 'How did you get to that point?'"

Stanley raised the point at a recent panel about body positivity hosted by Refinery29, which included Kelsey Miller, the author of Big Girl: How I Gave Up Dieting and Got a Life, Tess Holliday, model and the founder of #EffYourBeautyStandards, CeCe Olisa, the co-creator of The Curvy Con and Jordan Younger, the writer of The Balanced Blonde.

Calling bullshit on fake lifestyles: Miller agreed with Stanley, emphasizing that the (false) sense of perfection extends across the body positivity movement.

"Is there a new pedestal [in the body positive community]?" she put forth to the group. "I sometimes feel a little bit like there are new expectations. Like, I feel like I have to project an image of being super mentally and physically well, perfectly all the time. And I have to share all that with everybody, and I have to apologize if I change my mind about something."

"I think people just kind of forget that when they go on to social media," Younger said. "They don't think about living authentically. They think about 'Oh, how can I get inspiration to be thinner? ... When really it's more just about trying to live our lives and be happy."

Younger, for her part, had struggled to overcome a set of expectations from the vegan online community, when she decided to stop being a vegan after developing orthorexia and switched her diet. Her blog went from being called "The Blonde Vegan" to "The Balanced Blonde." Now, she still faces a new set of expectations from online users who expect her to have an even more "balanced" lifestyle after switching her diet.

Those expectations are also ever-present in the yoga community, Stanley said. What if someone does yoga but also doesn't look super fit? What if, in fact, someone wants to get a double cheeseburger after a yoga class? Stanley certainly has done it and she's not ashamed of it.

"I would say as a fitness professional ... especially being a fat fitness professional — you always feel like you have to ... apologize for your size," Stanley said. Since people expect yoga instructors to lead a particular lifestyle, she's often on the receiving end of questions about what food she eats and how often she practices yoga, questions like, "'How often are you doing these certain things? Do you cross-train?'"

The underlying memo: She must be doing something wrong because she doesn't seem to fit that picture-perfect lifestyle.

Authenticity reigns supreme: Still, the recipe for success, particularly in the body positive movement, is one where authenticity is key. Part of her job as a body positive enthusiast, Olisa said, is to be transparent about the good — and bad — days. That means resisting the pressure to project a happy-go-lucky vibe 100% of the time, which the panelists all agreed can weigh on them.

"I always say 'Confidence is complicated,'" Olisa told the audience. There may be days where she wakes up to a bad day or looks in the mirror and isn't happy with what she sees, she said.

"Like, it doesn't change the fact that I know in my heart certain things about myself," she said. "But I think like projecting like that one note, like we're always just happy and it doesn't matter — that's really dangerous too."

The same rule applies to yoga, Stanley argued. In her experience, the best yoga teachers acknowledge that it took them a lot of work to reach the state that they are in. They don't pretend to live a public life of serenity without acknowledging the nitty-gritty behind the scenes.

"Usually people come to yoga from a terrible injury or they come form some sort of traumatizing experience," Stanley said. "It's usually a death, substance abuse to some degree. My teachers all came to yoga from horrible experiences, and that's why they're awesome, because they're open to talking about that."

Stanley isn't the first one to call out the less-pristine side of yoga. (Just see these photos of the awkward poses and sweatiness that usually goes into yoga.) But in the world of Instagram sun salutations and Lululemon-clad bums, seeing some real sweat, tears and honesty is still rare — and necessary.

Being honest and calling bullshit when necessary, on the other hand, does.