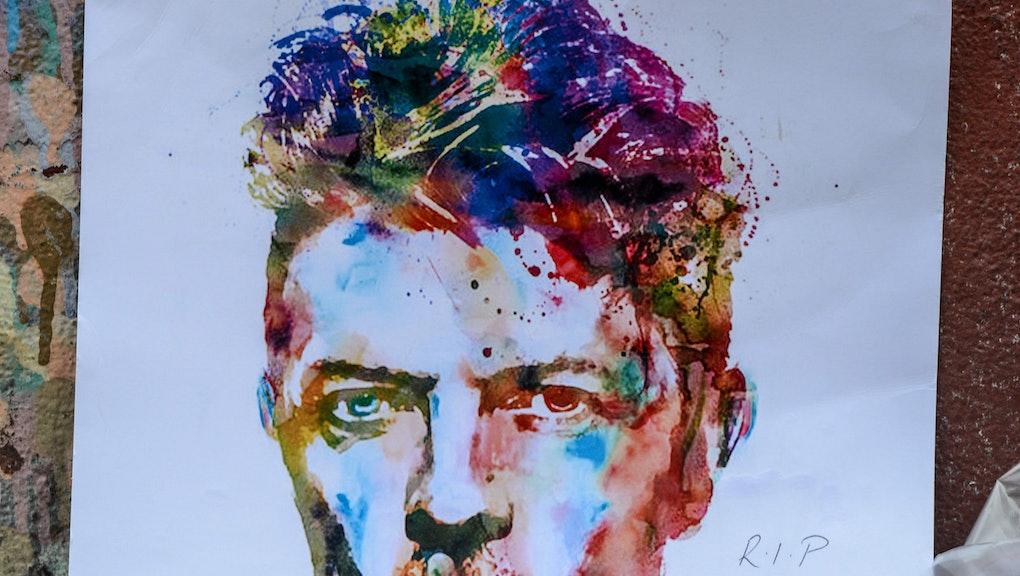 In his 69 years on Earth, David Bowie's genius took so many shapes. He was a Martian, a doomsday seer, a funk icon, a sinister cabaret crooner and pop's ultimate "Lazarus." He experimented with nearly every genre — from folk to hard rock to disco and "plastic soul" to electronic minimalism — and by mixing it with his sparkling eye for design, he made it his own.

"I have to take total control myself," Bowie once told William S. Burroughs of his creative process in one of his finest interviews. "I can't let anybody else do anything, for I find that I can do things better for me. I don't want to get other people playing with what they think that I'm trying to do. I don't like to read things that people write about me. I'd rather read what kids have to say about me, because it's not their profession to do that."

To celebrate the brilliant, androgynous amalgam that was David Bowie, we've put together a series of standout tracks from every era of his life, accompanied by quotes from his rare interviews.

Most people assumed Bowie's first major single, 1969's "Space Oddity," was a dig at the hokey British space program. However, it had far more of a classic '60s stoner origin story than most assumed. "It was written because of going to see the film 2001, which I found amazing," Bowie told Performing Songwriter. "I was out of my gourd anyway, I was very stoned when I went to see it, several times, and it was really a revelation to me. It got the song flowing."

The BBC featured the song in their coverage of the moon landing, which gave Bowie an immense amount of joy, considering how tragic Major Tom's ending in the song is. "I'm sure they really weren't listening to the lyric at all," Bowie said with a laugh in Performing Songwriter. "Obviously some BBC official said, 'Oh, right then, that space song, Major Tom, blah blah blah, that'll be great.' 'Um, but he gets stranded in space, sir.' Nobody had the heart to tell the producer that."

"The Man Who Sold the World"

In 1970's "The Man Who Sold the World," Bowie combined the tenants of the existential thriller with folk. The result was a voyeuristic glimpse inside the unsettled mind of a man who meets a doppelgänger of himself.

"That song for me always exemplified kind of how you feel when you're young, when you know that there's a piece of yourself that you haven't really put together yet," Bowie told BBC Radio in 1997. "You have this great searching, this great need to find out who you really are."

No other song sums up Bowie's legacy as well as "Changes." The song showed Bowie reflecting on his constantly shifting personas and looking to his future, when he would surely become the out-of-touch, aging "rock and roller." Yet that reality never dawned.

"Changes" fared poorly on the charts around the time of its release, but later it assumed a legendary quality that surprised Bowie tremendously. "It turned into this monster that nobody would stop asking for at concerts: 'Dye-vid, Dye-vid — do Changes!'" Bowie said in an interview, according to Genius. "I had no idea it would become such a popular thing."

"Starman" and all of Ziggy Stardust and the Spiders From Mars

Ziggy Stardust, one of Bowie's most well-known personas, was designed to be the platonic ideal of a rock star. Androgynous, sexually promiscuous and drug-addled, Ziggy Stardust used rock 'n' roll as more than just entertainment, but as a way to foretell the coming of the mankind's savior.

"Ziggy is advised in a dream by the infinites to write the coming of a starman, so he writes 'Starman,' which is the first news of hope that the people have heard," Bowie once told author William S. Burroughs in an interview for Rolling Stone. "So they latch onto it immediately ... Now Ziggy starts to believe in all this himself and thinks himself a prophet of the future starman. He takes himself up to incredible spiritual heights and is kept alive by his disciples."

The whole album, Ziggy Stardust and the Spiders From Mars, tells this story of Ziggy's rise to his eventual "Rock 'n' Roll Suicide" in stunning technicolor glam rock fashion.

"Rebel Rebel" was David Bowie's final farewell to the glam movement he helped found, leading into his next reinvention as a soul icon. It summed up nearly all the tenants of the genre: its androgyny, its emphasis on fashion and pushing boundaries. "We like dancing and we look divine," Bowie sings. "You love bands when they're playing hard/ You want more and you want it fast."

As for the riff itself, Bowie apparently came up with it to get under Mick Jagger's skin. "He [Bowie] said, 'I've got this list and it's a bit Rolling Stones-y," Alan Parker, Bowie's guitarist, told Uncut in 2014. "I just want to piss Mick off a bit.'"

In 1975, Bowie released Young Americans, an album recorded with the help of a group of established funk and soul musicians. One of those musicians was Carlos Alomar, a former guitarist in James Brown's band. He came up with riff for "Fame," Bowie's ode to the vacuousness of celebrity.

"Fame itself, of course, doesn't really afford you anything more than a good seat in a restaurant," Bowie once told Performing Songwriter. "I'm just amazed how fame is being posited as the be-all and end-all, and how many of these young kids who are being foisted on the public have been talked into this idea that anything necessary to be famous is all right. It's a sad state of affairs."

"Sound and Vision" kicked off Bowie's minimalist period that spanned three albums: Low, Heroes and Lodger, all recorded in Berlin. He fled to the United States to try to kick his drug habit and revitalize himself creatively.

"I had approached the brink of drug-induced calamity one too many times, and it was essential to take some kind of positive action," Bowie once told Uncut. "For many years, Berlin had appealed to me as a sort of sanctuary-like situation. It was one of the few cities where I could move around in virtual anonymity. I was going broke; it was cheap to live. For some reason, Berliners just didn't care. Well, not about an English rock singer anyway."

Queen originally invited Bowie into the studio to collaborate on the Queen song "Cool Cat." Instead, they jammed and emerged with an entirely new song: "Under Pressure." Yet the melding of their strong personalities didn't exactly make for the most relaxed creative atmosphere.

"It was hard, because you had four very precocious boys and David, who was precocious enough for all of us," Queen guitarist Brian May told Mojo in 2008. "David took over the song lyrically. Looking back, it's a great song but it should have been mixed differently. Freddie and David had a fierce battle over that. It's a significant song because of David and its lyrical content."

"I went mainstream in a major way with the song 'Let's Dance,'" Bowie said in a 1995 cover story for Interview magazine titled "David Bowie, Double Trouble!!" The move brought him tremendous international success, but it almost destroyed him creatively.

"I pandered to that in my next few albums, and what I found I had done was put a box around myself," Bowie said. "It was very hard for people to see me as anything other than the person in the suit who did 'Let's Dance,' and it was driving me mad — because it took all my passion for experimenting away."

After getting adequately disgusted with disco himself back on the path towards innovation, Bowie took a step back toward his rock roots. He assembled the band Tin Machine, which recorded some of the most aggressive and hard-hitting music of Bowie's career. The project was short-lived, but it gave Bowie an opportunity to revitalize himself creatively.

"I look back on the Tin Machine years with great fondness," Bowie told Uncut. "They charged me up. I can't tell you how much. Reeves shook me out of my doldrums, pointed me at some kind of light — said, 'Be adventurous again.' I've been finding my voice, and a certain authority, ever since."

Bowie's most recent album, Friday's Blackstar, was released on his 69th birthday. Blackstar proves that Bowie had one final creative transformation left in him: an inscrutable, seer-like jazzman. The album features contributions from jazz musicians Maria Schneider and Donny McCaslin and was produced by longtime collaborator Tony Visconti. The inscrutable and compelling artifact stands as proof Bowie was a ceaseless innovator right up until his death, which, according to a Facebook post from Visconti, was a "work of art," just like his life.

Listen to a playlist of selected hits, curated by Mic, featuring the above tracks and others below to mourn the death of pop's most masterful shapeshifter.