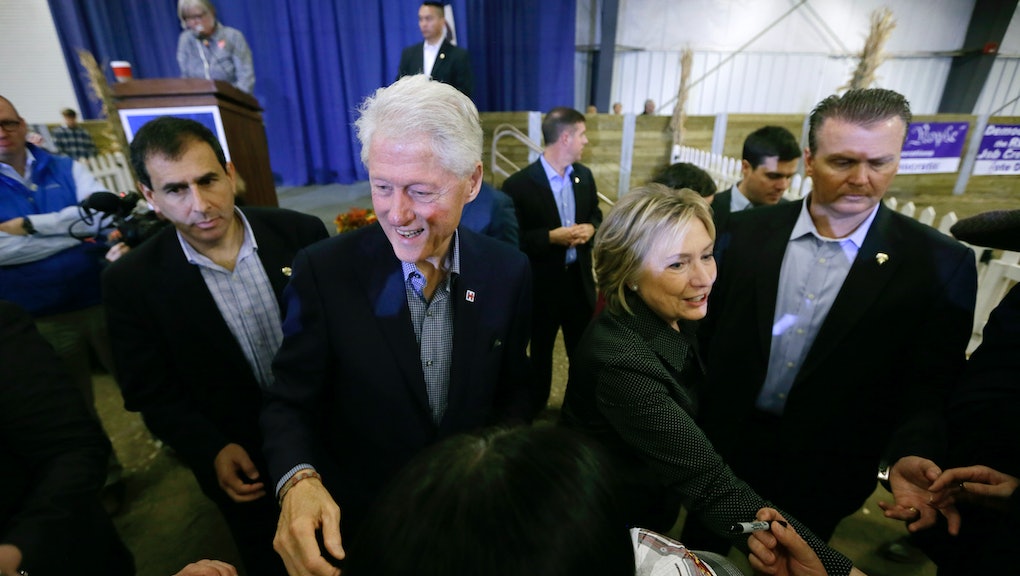 "This is something that the Republicans have been trying to turn into political gold for a long time," Clinton said Sunday in an interview with the Boston Globe editorial board. "And it hasn't worked.

"So if that's what they want to spend their time talking about, that's their choice. It is certainly, in my view, not a campaign that is going to really deal with the issues that most Americans are concerned about."

Clinton, who's been dogged for years by stories about former President Bill Clinton's philandering — alleged and otherwise — told the Globe "most Americans have made up their minds one way or another about all this and I think it will be up to voters to sort it out."

The most recent questions over Bill Clinton's actions have been fueled by Trump, who on Friday released a video on Instagram juxtaposing the former president with images of former Rep. Anthony Weiner (D-N.Y.) and Bill Cosby:

Trump's decision to play up Clinton's indiscretions is meant to do more than simply embarrass the ex-secretary of state. More pointedly, he's using the Clintons' complex relationship to make the argument — which is certainly arguable — that he's got more respect for women than does the would-be first woman president.

Clinton is "not a victim. She was an enabler. She worked with him," Trump charged on Fox News Sunday, speaking to allegations that the former first lady sought to silence her husband's purported flings.

On Wednesday, retired nurse Juanita Broaddrick resurfaced on Twitter to revive her claim that Bill Clinton raped her while running for governor of Arkansas in 1998. Broaddrick called it a cruel irony that Hillary Clinton had pressed for "rape victims to be believed" while, Broaddrick said, Clinton had tried to squelch her husband's accusers.

Trump said Bill Clinton's marital track record is fair game because he has been out on the trail for his wife — a role that turned out to be more than a bit of a mixed blessing during her 2008 run for the White House. The former president, a champion campaigner who's still extremely popular among Americans who warmly remember his administration as a time of economic prosperity, remains a draw for his wife's campaign.

On the flip side, the raft of disparaging remarks he made during the 2008 contest about now-President Barack Obama, put Team Clinton on the defensive with black leaders and voters who took offense.

Hillary Clinton, who recently became the anointed candidate of Planned Parenthood, has shot down the idea that Trump would "cherish" women more than she would if he wins the Oval Office.

"There are very clear distinctions, he can say whatever he wants to about me," she said on CBS News' Face The Nation when asked about Trump's series of broadsides. "I am not going to let him or any of the other Republicans rip away the progress that women have made — it's been too hard fought for and I'm going to stand up and make it clear there's a huge difference between us."

Playing up the theme of Clinton as a defender of women, her campaign on Monday announced that a quartet of top female senators would hit the trail in Iowa late this week to discuss her "commitment to moving America forward by guaranteeing women's right to make their own healthcare choices."

That Trump is attacking Clinton by going after her husband's interactions — alleged and admitted — may be seen as a solid example of why people who live in glass skyscrapers shouldn't throw stones.

The thrice-married former reality show star has a long history of calling women "bimbos," "disgusting animals," has lectured extensively on the importance of rich men protecting themselves from gold-diggers by way of pre-nup, and has said women rely on their looks and sex appeal to get ahead in life.

Reminders of those comments in the campaign coverage probably won't bother the Donald, though.

He's riding high in the polls — and as he said in a 1991 Esquire interview, "You know, it doesn't really matter what [the media] write as long as you've got a young and beautiful piece of ass."