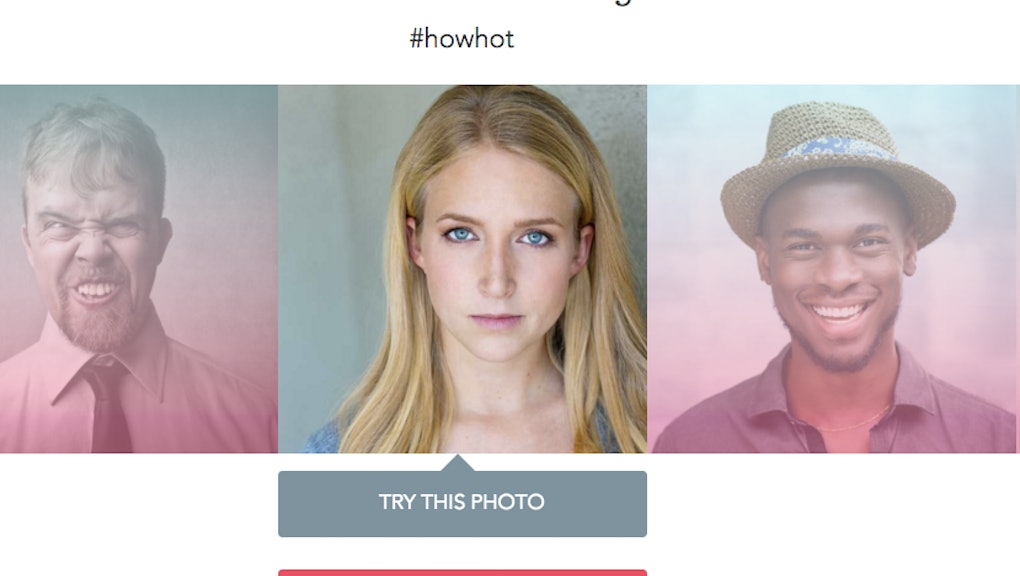 Soon enough, robots are going to be doing all sorts of cool and useful things for us, like composing symphonies or performing surgery or folding laundry. But there's something even more utilitarian (not to mention shallow) artificial intelligence will soon give the world: a dating app that tells you how bone-worthy you are.

Meet Blinq, a hot-or-not dating app for the modern age, which determines people's ages and ostensible attractiveness based on the photos they upload. The app is intended to help users choose which pictures they should include in a dating profile based on an algorithmic evaluation of their hotness, but it's ostensibly also useful in weeding out unattractive prospective partners, assuming you're the kind of person who requires an elaborate mathematical formula to tell you whether or not you're attracted to someone.

Developed with a team of researchers at the Computer Vision Laboratory at ETH Zurich, the Swiss app uses the same algorithm as howhot.io, which lets users upload photos of themselves so a bot can tell them where they rank on a scale of "Hmm," "OK," "Nice," "Hot," "Stunning" or "Godlike."

"The software behind howhot.io learned from millions of images of faces how to determine the attractiveness, age and gender of a person," Blinq co-founder Alex Zimmermann told Mic. "When a user uploads a photo, the software first tries to find the location of the face. In the next step, a deep neural network — something like an artificial version of the human brain — analyzes the face with the knowledge of all the images seen before to [make its rankings]."

Even if the bot were to do a perfect job of distinguishing the hots from the normals and the uglies, Zimmermann said that the ultimate goal of Blinq isn't to distill cultural beauty standards into a mathematical formula. Rather, the app is meant to help people choose the profile picture that's going to get them the most messages, specifically from a pool of people they're most likely to find attractive.

"We try to fix the problem that a lot of people do not know what kind of images do work well on dating apps," Zimmermann said. "With our technology we try to give a suggestion in seconds which image to choose."

The app picks up on people's preferences as they look through potential mates, so it can determine the likelihood of a given user right-swiping on you as well.

"We tried to learn personalized preferences, i.e. if you like men with a beard, after you have liked a couple of men with a beard the proposed system would recognize that and know that you prefer men with a beard," Rasmus Rothe, one of the PhD researchers behind the technology, told TechCrunch. "For howhot.io we simplified the process and just learned the 'objective' criteria... which is very difficult, because it is really a subjective thing!"

With that in mind, Rothe and his team have urged users not to take the AI judgements too seriously. On their website, they note that "attractiveness is highly subjective and its perception differs from culture to culture."

"Our algorithm is trained on the pictures of the Blinq community that is mainly based in Switzerland," the site notes. "In other parts of the world the perception might be very different ... have fun and don't take the results too seriously." And if you're more into, say, figuring out who you are and aren't attracted to for yourself, you can always just stick with Tinder.