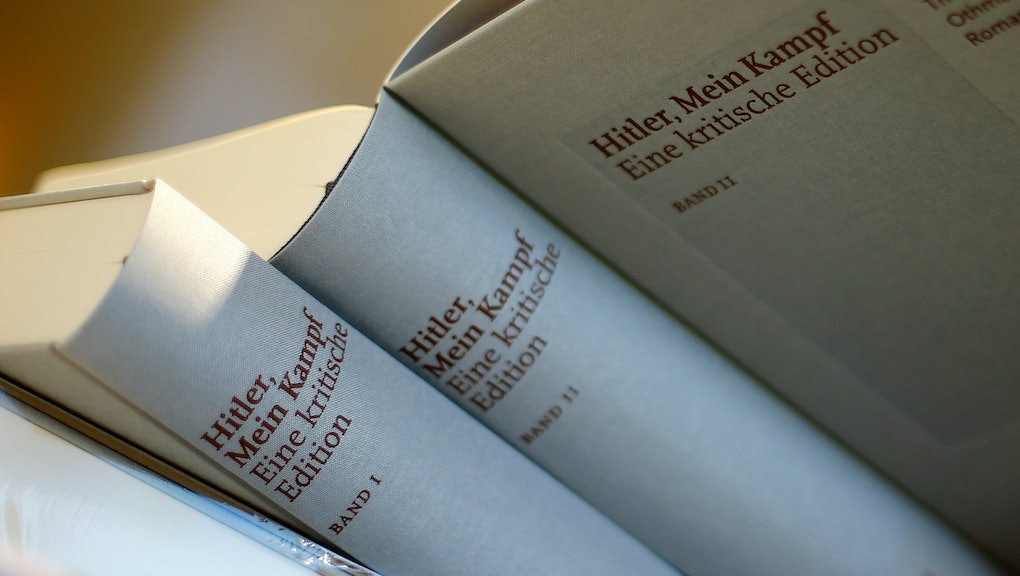 The last time Adolf Hitler's Mein Kampf was available for purchase in Germany, it was a best-seller — albeit only because of the author's efforts to make his memoir a mandatory fixture in German homes.

On Friday, Munich's Institute for Contemporary History republished the two-volume tome for the first time in 70 years; its critical edition comprises 2,000 pages and 3,500 notes, costs around $64 and, according to the Telegraph, sold out instantly, reclaiming its title as Germany's national best-seller. Mein Kampf's resurgence comes at a time when Germany is again the site of protests by racial ideologues of the right-wing fringe. Yet this brand of thinking is precisely the kind the publishers of the critical edition say they aim to discredit.

"What we are doing," Magnus Brechtken, the Institute for Contemporary History's deputy director, told NPR, "is just giving anyone who is interested in Mein Kampf the necessary information to put this book into the correct historical context."

Hitler did not adhere to the facts in composing the work, Brechtken noted, adding that Mein Kampf is the only text to come out of the Third Reich that Germany hadn't yet received an academic treatment. "We are just filling this gap, so to speak, so there is [a] full overview on this historical text," he said.

And this historical text calls for a lot of careful contextualization. The original version of the book was authored, if not exactly written, by Hitler between 1924 and 1925: While serving time in Landsberg prison on a treason charge, Hitler dictated the bulk of Mein Kampf to transcriptionist-turned-deputy-Führer Rudolf Hess.

Perhaps for this reason, the book reads less as a cohesive ideology and more as a stream-of-consciousness diatribe, detailing the disappointments of the dictator's early years, his nonsensical theories of racial purity, the supposed destiny of Germany and many other themes that would later become tenets of the National Socialist German Workers' Party doctrine.

Initially, the book sold poorly. After Hitler took power, however, that trend reversed as the Führer endeavored to embed his masterwork into the foundation of German culture: Sales sky-rocketed to an estimated 10 million by the end of the war. Yet according to John Connelly — professor of history at University of California, Berkeley — the wide circulation had little bearing on the rate at which the book was actually read.

"The claims made in the book are outlandish and unsustainable," Connelly told Mic. "Those Germans who cast their vote for the Nazis in 1932 overwhelmingly did not have its pseudo-arguments in mind." Indeed, Mein Kampf is infamously long, nonsensical and in all ways a slog; most Germans didn't bother with it.

But sales suggest that could be changing. The German state of Bavaria has held the copyright for Mein Kampf since Germany's defeat in World War II and has always declined to reprint it. The book's copyright expired on Jan. 1 of this year, opening the door to Mein Kampf's reissue, despite the fact that the Bavarian government withdrew its financial support of the project in 2014. So far, 15,000 pre-orders have been placed on a 4,000 copy first printing of the annotated edition.

Still, perhaps now is not the time to dust off those printing plates. Xenophobia is running high, especially in the wake of the New Year's Eve attacks in Cologne and other German cities. More than 600 women since registered a range of criminal complaints from robbery and sexual molestation. Asylum-seekers are among those suspected of coordinating and carrying out the crimes, spurring a resurgence of Germany's far-right.

In 2015, the country opened its doors to 1.1 million refugees, primarily from Syria; the rising migrant population has coincided with increasing crime rates within the country's right wing. In November, the Express reported on the rise of one neo-Nazi group, the "nationalist settlers," which the paper characterized as "ultra-right Hitler worshippers" adhering more closely to National Socialist values than they do traditional skinheads. In August, German Chancellor Angela Merkel condemned the rise in attacks on refugees. Because of the migrant crisis and Germany's open-door policy, the country's right wing is louder now than at perhaps any point in recent memory.

This time around, German residents are standing up to the militant minority, but the parallels with Hitler's power grab are hard to miss.

So no, the concept of a "Mein Kampf best-seller" doesn't look great for Germany. That the book's arrival is heralded by renewed best-seller status is alarming, of course, because it lays out the doctrine of hatred Hitler put into action in the years leading up to and during WWII. And according to Jewish Community of Munich and Upper Bavaria's press speaker, Aaron Buck, the ban should remain in place.

"Mein Kampf is an abhorrent, anti-Semitic, hate-mongering text," Buck told the New Yorker's Sally McGrane. "This product of hate, that caused so much horrific damage in this country, should never be published or distributed in Germany again."

That the book's arrival is heralded by renewed best-seller status is alarming, of course, because it lays out the doctrine of hatred Hitler put into action in the years leading up to and during WWII.

Ronald S. Lauder, president of the World Jewish Congress, believes that the book's republication was flat-out unnecessary, no matter the timing. "I don't see the need for a critical edition," Lauder said in a statement. "Unlike other works that truly deserve to be republished as annotated editions, Mein Kampf does not. Already, academics, historians and the wider public have easy access to this text."

And that's an important point. While publication of Mein Kampf has for 70 years been suppressed in Germany, it hasn't been impossible to obtain. Anyone, anywhere can order a copy online, which is why it remains just as infamous today as it was in 1945. But as McGrane points out, the tome "is full of bombastic, hard-to-follow clauses, historical minutiae and tangled ideological threads, and both neo-Nazis and serious historians tend to avoid it."

Enter the critical edition, which exists to ensure that the myriad lies and misrepresentations baked into Hitler's original text won't be allowed to pass for truth. It is not intended as a tool for Nazis, but for "historians and other scholars," the audience that the Times of Israel reported are most likely to have bought out the book's first print run.

Indeed, based on the current climate in Germany, now might be the perfect time for a fact-check on Hitler. Josef Schuster, the president of Germany's Central Council of Jews, recognizes the reprint's potential to bridge a gap in popular understanding of the book and its content.

"I can well imagine that this critically annotated edition will be conducive to clarification," Schuster said, according to Die Zeit, "and that it will be able to resolve a certain myth that reigns over this book." And as Schuster pointed out, the ideology presented in the book isn't dissimilar to that of today's extreme right. "Certain things we hear again today, we also find in this book," he said.

Things like the term "rapefugees," for example. Things like the call for Germans to reclaim their freedom and rid the country of a particular religious group.

Proponents of the new edition argue that rather than perpetuating this vein of thought, the work would dismantle the rhetoric neo-Nazis have long revered, and that to censor it does more harm than good. Even if academics are the only people reading the critical edition, that it exists as a teachable text should help Germans and — if the edition is translated, as has been requested — international readers understand the myriad fallacies in Hitler's ideology.

And then there's the free speech argument. As Connelly asked in his email to Mic, "Don't liberally governed societies believe that all views must compete and that out of this we approximate the truth?"

For readers in Germany, the hope is that the critical edition of Mein Kampf will make that process yet easier. At the very least, the book's republication should serve as a timely reminder of the staggering damage that unrestrained, unimpeded hate speech can do.