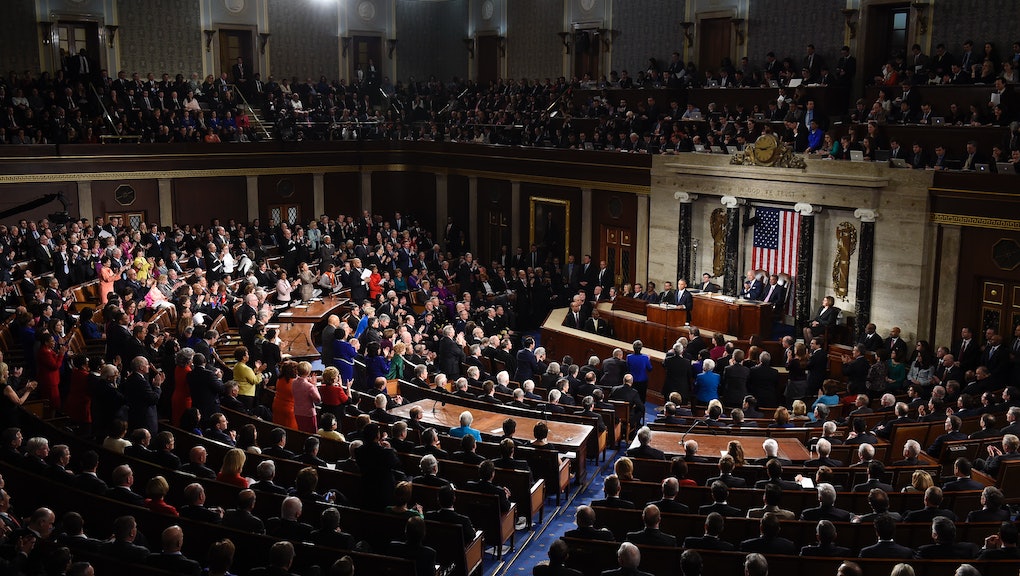 Aside from the celebrity-studded White House Correspondents' Association dinner, the annual State of the Union address is Washington's ultimate see-and-be-seen affair.

Members of Congress jockey for coveted positions along the House chamber's center aisle, where they hope to grab a quick word with the president before he recites his policy wish list and, invariably, informs Americans that the state of their union is strong. Supreme Court justices emerge from the cloistered world of the high court, occasionally using the address as an occasion to grab some shut-eye (looking at you, Notorious RBG). Cabinet members ham it up for the cameras when the president discusses topics that touch their respective departments.

According to the Senate Historical Office, the practice began "at least" at the height of the Cold War in the early 1960s, but may have started even earlier. It wasn't until the 1980s that the White House started publicly disclosing the identity of the designated survivor. The White House chief of staff makes the selection in the weeks leading up to the speech, but the pick isn't announced until right before the address.

Filling the role is "a very serious and somber undertaking," former Secretary of the Interior Ken Salazar told Mic in an interview. Salazar, whose position placed him eighth in the line of succession, served as the designated survivor during President Barack Obama's 2011 State of the Union address.

"It's a high privilege and an honor to serve in that capacity and you feel the responsibility with that position — but [you're] always hoping nothing happens," Salazar said. "It's one of those evenings that will be stored in the memory bank forever."

Preparing for the big night: So what all goes into the role, besides hoping that disaster doesn't strike? Designated survivors undergo training exercises in which they're briefed by Secret Service agents on what to do in the event of catastrophe, according to those who served. Unsurprisingly, past designated survivors aren't keen on disclosing the specifics of those briefings.

Former Secretary of Agriculture Dan Glickman, whom the Clinton White House tapped to fill the role in 1997, told Mic that the Secret Service wanted him, "if possible," to leave Washington, D.C., on the night of Clinton's speech. Glickman dutifully opted to visit his daughter in New York City, flying up on an Air Force plane along with a doctor, Secret Service agents and a military officer who retained the nuclear codes. ("I didn't get into any detail with them on that," Glickman recalled to Mic.)

Glickman spent the night in New York City, along with a doctor, Secret Service agents and a military officer who retained the nuclear codes.

"Today, I think the scenario is viewed as much different," he said. In the post-9/11 era, "the security is just remarkably stepped up, because the threat levels are much higher." Notably, Salazar wouldn't disclose where he spent his evening in 2011, other than to say that it wasn't in Washington.

"President Clinton had a tendency to linger in his speeches, so it lasted longer than we expected," he recounted to Mic. Once Clinton concluded his speech, Glickman's entourage promptly left his daughter's apartment.

Afterward, Glickman and his daughter grabbed a late dinner at a Japanese restaurant about eight to 10 blocks from her apartment. By the time the tab arrived, Glickman said, "a really horrific sleet storm" was underway.

"We waited and waited and waited for a cab to no avail," he said. "So we had to walk eight to 10 blocks back to her apartment in the freezing cold and sleet. The irony was, here I was just a few minutes earlier, almost the most powerful person in the country, and now I couldn't even get a cab. There's a great lesson there in the impermanence of power."

The what-ifs: The power that comes with being the designated survivor may prove even more ephemeral than the Washington news cycle, but it comes with a very real sense of gravity — and, naturally, at least a passing thought about taking the Oath of Office.

"It is unique and it is serious," Salazar said. The former attorney general of Colorado added, "I come from a law enforcement perspective, so of course I took the training very seriously."

For his part, Glickman gave some brief contemplation to the historical first his presidency would have marked.

"I'd have been the first Jewish president, which would have been kind of nifty," he said. "But I liked President Clinton a lot, so I didn't want it to happen."

But if it had? Glickman, who later became chairman of the Motion Picture Association of America, couldn't help thinking of the 1972 film The Candidate. After winning a United States Senate election in which no one had expected him to prevail, Robert Redford's character asks, "What do we do now?" Ahead of Clinton's speech, Glickman told his wife, Rhoda, that he expected a President Glickman would have much the same sense.