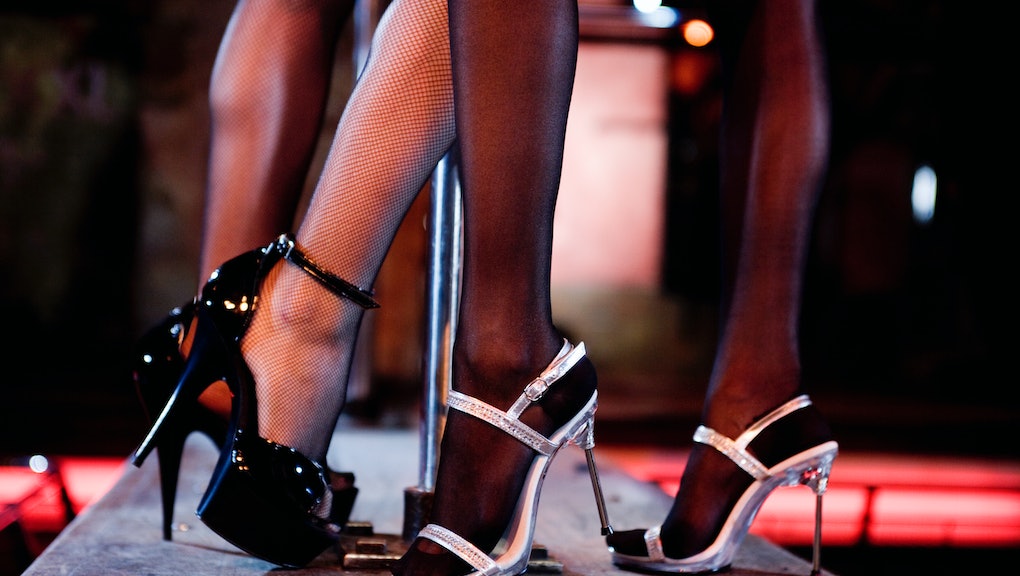 "I don't know that I have a least favorite part [about being a voter]," Jennifer Peters told Mic. "I think that the hardest part though is always watching friends' scenes."

You might be wondering why Peters would find it difficult to watch her friends on screen. It's because, though her friends are performing in various types of scenes and films, she's not a judge in the Golden Globes. She's a judge for the AVN awards.

While winning an award for something like best group sex scene may seem like a liability to those outside the adult entertainment industry, to those inside the industry, the AVN awards are extremely significant. Anikka Albrite, AVN's 2015 female performer of the year, who has been nominated for 13 awards in 2016, said an AVN award catapults winners to a new level in their careers.

"When I won the female performer of the year award, it felt like people, especially newer [performers] and fans, saw me as a role model," Albrite said. "It made me a respected representative for the adult industry."

Don Houston is a regular volunteer for US Veterans who rescues dogs in his spare time. He's in his 50s and has a master's degree. He has also been an AVN awards voter for eight years.

Although the amount of content each voter must consider is pretty overwhelming, the basic voting process itself is quite simple. Voters rank their choices in each category, from best to worst. In a category with fifteen nominees, for example, a voter's top choice gets fifteen points, their second choice gets fourteen points, and so on. The nominee with the most points after all the voters' choices have been aggregated is the winner.

Jennifer Peters is a freelance reporter covering military and defense for Vice. She's also been working in the adult industry as a writer and editor for adult content and trade publications since 2006. Peters became an AVN awards voter for the 2012 program, and she's currently one of eight women on the roster for 2016.

Every awards-granting organization faces criticism, including accusations of fixing and bias. The aVN Awards are no different. Though Peters acknowledges others may have acted dishonestly in the past, she cites her time in the industry as one of the main reasons why nominees couldn't sway her during the voting process, even if they wanted to.

"One of the 'perks' of being in the industry for so long is that autographed DVDs or new swag don't really have any impact on me," she told Mic. "Chances are I've interviewed whoever it is whose autograph is being given to me, and I don't need more crap filling up my apartment, so short of buying me a pony, there's nothing a nominee could really do to curry favor with me."

According to Kelly, it's easier to vote in some categories and more challenging to vote in others, largely due to their personal content preferences. Kelly, for instance, votes primarily in the all-sex (meaning, non-narrative) and gonzo award categories, because they have more experience reviewing such content.

"The [all-sex categories] are much easier for me since that's where the majority of my reviews lay," Kelly said. "I'm more hit-and-miss on features. That's an area I strive to improve on each year but seem to fall a little short on watching, so I try and watch as much of those when they arrive so I can offer up a solid vote in those categories."

Given the amount of time and energy Kelly puts into the AVN awards, it stands to reason that they derive some deeper satisfaction out of being a voter.

"I'm a fan of what these performers do," they told Mic. "To visually fulfill so many fantasies that so many of us have sexually is a big deal for me. I appreciate what what they go through to provide us this stimulating material to enjoy."

"The awards are 'fixed'? I've been here long enough that now I just laugh when I hear that accusation. If that were the case, why would so many of us give up so much of our lives for so long?" Sherri L. Shaulis asked, rhetorically.

Shaulis, 46, is the senior editor of Pleasure Products for AVN. She started working for the magazine a little more than eight years ago and has been a voter, as well as a member of the nominating committee, for six or seven. "I lose track," she said, laughing. "I was not automatically granted voting privileges. I had to prove my worth by working my way up the ladder."

During the nominations process, Shaulis spend hours each day sitting in a conference room with other committee members going over every single submitted  pre-nomination for every single category. The whole thing takes approximately seven weeks and includes watching hundreds of hours of sex scenes and acting scenes. This is in addition to reviewing and critiquing everything from hair and makeup to sets and costumes and cinematography and scripts.

"This year alone, we had one category that had several hundred pre-nominations submitted and, as a committee, we had to examine those entries and narrow down the list to the fifteen nominees," Shaulis explains.

In order to combat rumors about "fixing" and give fans and industry insiders a peek behind the scenes, Shaulis took to Twitter to live-tweet the AVN nomination meetings. Though she doesn't mention names or titles in her tweets, she shares some of the funnier comments that are said during the meetings.

"Quite a few people in the industry tell me it's their favorite part of awards season," she said. "They love trying to figure out who or what we're talking about."