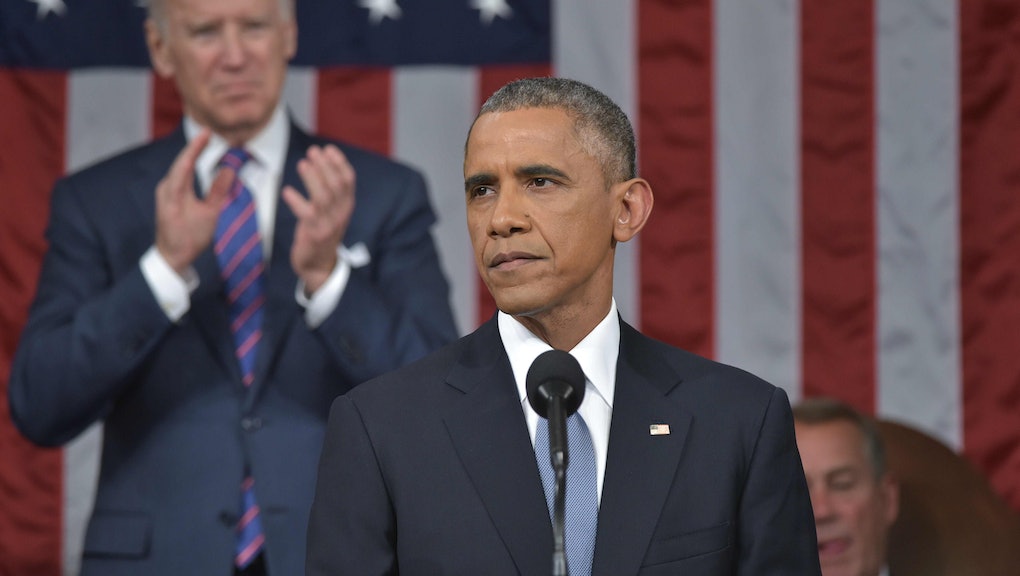 Obama first spoke before congress in February 2009. While not an official State of the Union address, the speech was widely followed and focused on reviving the economy in the midst of the financial crisis. In his 2010 address, he marked his administration's achievements in economic recovery, like cutting taxes for some families, small businesses and homebuyers.

In his 2011 speech, Obama talked about immigration and in 2012 he touted the military and government for killing al-Qaeda leader Osama bin Laden, pointing out that Republican and Democratic leaders united in that effort.

The 2013 address came just two months after 20 children were shot dead in the Sandy Hook Elementary School shooting. Obama honored the lives lost and revealed plans to combat the United States' gun violence epidemic. In his 2014 speech, the president proudly confirmed that all U.S. soldiers were out of Iraq and in 2015 he admired the U.S.' "persistent, steady resolve."

In preparation for Tuesday, here are 15 of Obama's mic-drop moments from his six past State of the Union addresses and first major speech before Congress:

On the deficit: "Now is the time to act boldly and wisely — to not only revive this economy, but to build a new foundation for lasting prosperity. Now is the time to jumpstart job creation, re-start lending and invest in areas like energy, health care and education that will grow our economy, even as we make hard choices to bring our deficit down."

On the financial crisis: "But I also know that in a time of [financial] crisis, we cannot afford to govern out of anger, or yield to the politics of the moment. My job — our job — is to solve the problem. Our job is to govern with a sense of responsibility."

On economic progress: "History reminds us that at every moment of economic upheaval and transformation, this nation has responded with bold action and big ideas. In the midst of civil war, we laid railroad tracks from one coast to another that spurred commerce and industry. ... In the wake of war and depression, the GI Bill sent a generation to college and created the largest middle-class in history. And a twilight struggle for freedom led to a nation of highways, an American on the moon and an explosion of technology that still shapes our world."

On American values: "Every day, Americans meet their responsibilities to their families and their employers. Time and again, they lend a hand to their neighbors and give back to their country. They take pride in their labor and are generous in spirit. These aren't Republican values or Democratic values that they're living by; business values or labor values. They're American values."

On the future: "The future is ours to win. But to get there, we can't just stand still. As Robert Kennedy told us, 'The future is not a gift. It is an achievement.' Sustaining the American Dream has never been about standing pat.  It has required each generation to sacrifice and struggle and meet the demands of a new age."

On education and illegal immigrants: "One last point about education. Today, there are hundreds of thousands of students excelling in our schools who are not American citizens. Some are the children of undocumented workers, who had nothing to do with the actions of their parents. They grew up as Americans and pledge allegiance to our flag, and yet they live every day with the threat of deportation. Others come here from abroad to study in our colleges and universities. But as soon as they obtain advanced degrees, we send them back home to compete against us. It makes no sense."

On killing Osama bin Laden: "One of my proudest possessions is the flag that the SEAL Team took with them on the mission to get bin Laden. On it are each of their names. Some may be Democrats. Some may be Republicans. But that doesn't matter. Just like it didn't matter that day in the Situation Room, when I sat next to Bob Gates — a man who was George Bush's defense secretary — and Hillary Clinton — a woman who ran against me for president."

On the role of the government: "I'm a Democrat. But I believe what Republican Abraham Lincoln believed: that government should do for people only what they cannot do better by themselves, and no more."

On Sandy Hook: "Now, if you want to vote no, that's your choice. But these proposals [on gun control] deserve a vote.  Because in the two months since Newtown, more than a thousand birthdays, graduations, anniversaries have been stolen from our lives by a bullet from a gun — more than a thousand."

On gun control: "Our actions will not prevent every senseless act of violence in this country. In fact, no laws, no initiatives, no administrative acts will perfectly solve all the challenges I've outlined tonight. But we were never sent here to be perfect. We were sent here to make what difference we can, to secure this nation, expand opportunity, uphold our ideals through the hard, often frustrating, but absolutely necessary work of self-government."

On troops in Iraq: "Tonight, because of the extraordinary troops and civilians who risk and lay down their lives to keep us free, the United States is more secure. When I took office, nearly 180,000 Americans were serving in Iraq and Afghanistan. Today, all our troops are out of Iraq."

On fighting terrorism: "We must fight the battles that need to be fought, not those that terrorists prefer from us — large-scale deployments that drain our strength and may ultimately feed extremism."

On extremism: "We're also supporting a moderate opposition in Syria that can help us in this effort, and assisting people everywhere who stand up to the bankrupt ideology of violent extremism. This effort will take time. It will require focus. But we will succeed. And tonight, I call on this Congress to show the world that we are united in this mission by passing a resolution to authorize the use of force against ISIL."

On American leadership: "Last year, as we were doing the hard work of imposing sanctions along with our allies, some suggested that Mr. Putin's aggression was a masterful display of strategy and strength. Well, today, it is America that stands strong and united with our allies, while Russia is isolated, with its economy in tatters. That's how America leads — not with bluster, but with persistent, steady resolve."