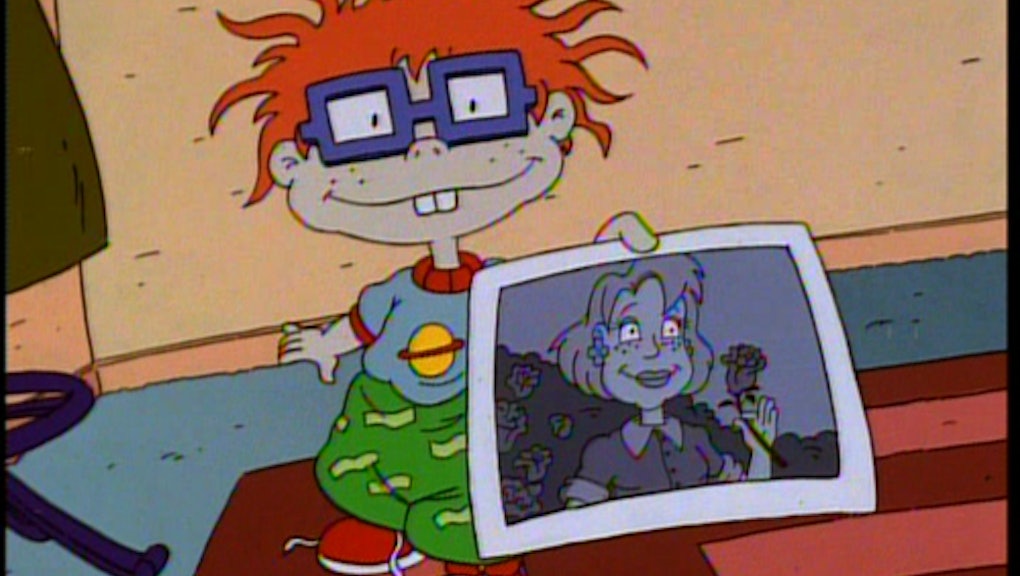 Although this week's rumor that Nickelodeon was reviving the show As Told by Ginger, an Emmy-nominated cartoon series about a middle school girl named Ginger Foutley, has not been confirmed (and may have been totally made up in the first place), the cartoon television network has previously said it's toying with the idea of rebooting some of its best shows from the past.

"We are looking at our library to bring back ideas, shows that were loved, in a fresh new way," Russell Hicks, president of content of development at Nickelodeon, told Variety in September. According to Variety, Nickelodeon may retool their original 90s cartoons as TV or movie specials that could potentially include network originals like Hey Arnold! or Rugrats.

Dan Schneider, creator of classic 90s Nickelodeon shows such as Keenan and Kel and All That, took to Twitter in March to ask fans which shows deserve a reboot.

90s babies may have been too young to understand some of the real issues the cartoons tackled. Here's a list of the episodes that deserve a revisit.

1. When Rugrats tackled the loss of a parent

One of the most memorable episodes of Rugrats, "Mother's Day," began with the babies searching for the ideal gifts for their mothers. However, the babies realize that Chuckie, the red-haired, bespectacled baby of the group, doesn't have a mom, leading Chuckie to find a gift for his father instead. While searching for presents for his father, Chuckie stumbles upon a box in the closet, which contains a photo of a young woman. Chuckie gave the photo to his father as a Mother's Day gift.

Chas Finster, Chuckie's father, revealed to his son that the woman in the photo is his mother, Melinda Finster. The episode doesn't provide a cause of death for Melinda, but it is heavily implied that she died from a terminal illness when Chuckie was (even) younger. This Rugrats episode was nominated for the "best animated program" category in the 1997 Primetime Emmy Awards.

Hey Arnold! may have been most well-known for its fresh cast of characters. The episode "Stoop Kid" introduced viewers to possibly one of the most popular characters of the entire series who did not appear regularly on the show.

The episode began with Gerald, Arnold's best friend, telling the story of a young boy who was left on his stoop shortly after birth. That boy, who remains nameless, only goes by the name Stoop Kid. Stoop Kid harassed anyone that dared to come near his stoop.

When the Hey Arnold! gang realized that Stoop Kid is simply afraid to explore beyond the stoop, Arnold helped Stoop Kid to leave his stoop, teaching us all a thing or two about compassion.

3. When Hey Arnold! taught us never to judge a book by its cover

In "Pigeon Man," Arnold took his sickly pigeon, Chester, to the Pigeon Man, a social outcast who prefers pigeons to people. Although Gerald tells a creepy story about the Pigeon Man, the hermit reveals to Arnold that his name is Vincent, and he agrees to a walk around the neighborhood with Arnold.

After a prank gone wrong, the Pigeon Man's bird sanctuary was destroyed, and the bird-loving hermit decided to leave his home. According to MoviePilot, some theorists believe that the ending of the episode was a metaphor for Pigeon Man's suicide. The Pigeon Man tells Arnold that his kindness restored his faith in some humans.

If these episodes gave you a major case of nostalgia, most reruns of Nickelodeon classics are available on The Splat.

4. When Doug taught us that it's OK to be yourself

In "Doug En Vogue," 11-year-old Doug Funnie found that all of his friends adopted his style of dress, thanks to the new fashion trend set by Dylan Farnum, an actor from the TV show set in the Doug universe, "Teen Heart Street." Doug was frustrated with everyone telling him that he was copying Dylan Farnum's style so he began searching for new outfits to wear, even though Doug wears the same outfit essentially every episode. Judy Funnie, Doug's hipster older sister, tells him that he shouldn't care what other people think of him.

At the end of the episode, Doug returned to his original style of dress, with the green vest and brown khakis many of us remember so vividly. All of the students begin following the next trend set by Dylan Farnum, but Doug learned that it is fine to be your own person.

5. When Rugrats taught us to be grateful

In "Chuckie's Wonderful Life," Chuckie wished that he was never born — something many of us may have related to when we were angry or sad at a young age.

Based off the 1946 film It's a Wonderful Life, Chuckie is visited by his "gardening angel" (which translates to guardian angel in adult-speak) who shows Chuckie how horrible everyone else's lives would be if he never existed. Chuckie's father, Chas, would be lonely because he never married. His only companion would be "Socky," his sock puppet, as he lives in a messy house. Chuckie's friends, Phil, Lil and Tommy, would have completely different personalities. Phil and Lil would be destructive, mean-spirited kids, while Tommy would lose his courage. Angelica would become a massive, greedy kid who moves into Tommy's home.

Upon seeing this lousy future, Chuckie realized that his life means much more to his loved ones that he originally thought. This episode of Rugrats showed young viewers that it is important to be grateful, because things could always be worse.