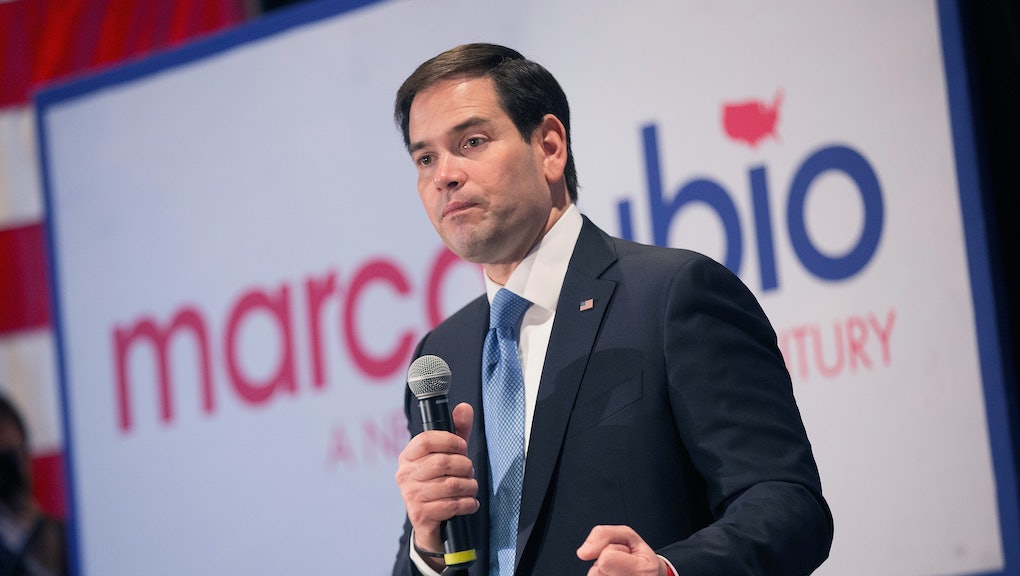 What Marco Rubio Really Means When He Says His Parents Were Exiles, Not Immigrants

Current GOP candidate and Florida Senator Marco Rubio is the son of Cuban immigrants — but voters might not know that from checking Rubio's campaign website. Rubio's official bio doesn't use the word immigrant at all to describe his family, saying instead that "The lives of Marco's parents were forever changed in 1956 when they came to America from Cuba."

In fact, Rubio has long seemed as though he sought to distance himself from his immigrant history, seeming reluctant to even use the word "immigrant," to describe his parents, preferring for many years to call them "exiles" instead, Mother Jones reported.

Rubio seemed to use the word "exile" to draw a distinction between his family and the wider immigrant community, even saying at one point during his 2009 senate campaign, "Nothing against immigrants, but my parents are exiles," reported the Washington Post.

Again and again, Rubio repeated the story that his parents had been forced to leave Cuba — but that may have been an exaggeration, reported the Washington Post in 2011.

" ... Documents show that Rubio's parents came to the United States and were admitted for permanent residence more than two-and-a-half years before Castro's forces overthrew the Cuban government and took power on New Year's Day 1959," reported the Washington Post. "The real story of his parents' migration appears to be a more conventional immigrant narrative."

Rubio denied the accusations that he had deliberately misrepresented his family's story, calling such claims "outrageous," CBS News reported, and told the Washington Post, "I'm going off the oral history of my family ... All of these documents and passports are not things that I carried around with me."

But years after his family's story was dragged into the public eye, Rubio still seems hesitant to identify as the child of immigrants, and he has faced criticism from those within the immigrant community for his policies and statements regarding immigration.

On his website, Rubio endorses "a merit-based system" for legal immigrants, rather than the current system which prioritizes family members of those already living in the U.S. Rubio's campaign website claims that "Our immigration system, designed primarily to reunite families, is an outdated relic of the last century."

In a recent interview for the New Yorker, Rubio was asked how he would respond to those who might accuse him of "pulling up the ladder after his family has reached safety."

"I don't think, for the country, it makes sense to continue to allow people to immigrate here in large numbers who we know do not have the skills or the education they need to succeed economically," Rubio said. "It's just a change based on new economic reality."

Rubio may be coming around to identifying as a child of immigrants: At a recent campaign stop in Iowa, he announced, "Both of my parents were immigrants," before adding "... When I am president, we will be guided by a very simple principle: If we cannot confirm and know 100% for sure who you are and why you are trying to come, you will not be allowed to enter the United States," Politico.com reported.