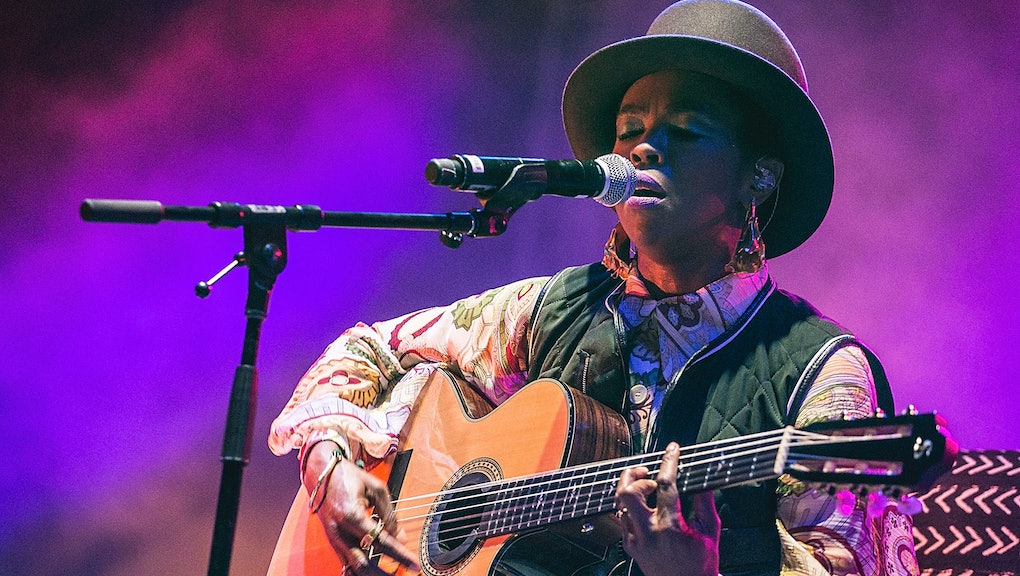 Back in 1998, Ms. Lauryn Hill sacrificed a bit of herself to make an offering of neo-soul music to the masses. To this day, it still heals. Or so I hope.

When I first encountered her work as a teenager, her unique blend of indignation at injustices and soaring declarations of self-love floored me. She awakened me to a level of sensual and intellectual ecstasy I hadn't known existed before. In a few words: I was in love.

At the top of the new year, with the dreaming and existential draining of the 2016 presidential election cycle before us, I'm reminded of the distinctive gift of Ms. Hill's artistry. Atop the year — at a moment when black rage will likely be rendered a junior, juvenile politics in the media, and black joy may be the choreographed remembrance of the Obama years — Ms. Hill's music is important because it can be understood as the coming together of black rage and black joy. Interpreted as a unified yet internally diverse body of music, Ms. Hill's work harbors fresh meaning in the age of #BlackLivesMatter.

What if there is a joy — the joy of Moneta Sleet Jr. photos, the marching band jubilee of Janelle Monae's "Hell You Talmbout" — undergirding the black rage of academics, activists, pavement protestors and prophetic preachers? And if that is the case, suppose further that black joy is a self-conferred, divinely forged nexus that midwifes rage at a nation still refusing to extend justice to the sons and daughters of Native Americans, African-Americans and Latin Americans?

Both black rage and black joy find expression in Ms. Hill's work. One can hear her unburdened shouts of black joy in her sensuously spiritual rendering of the evangelical hymn "Joyful, Joyful" in Sister Act 2. One also thinks of the pensive serenity of "Zion," climaxing in cries of "my joy, my joy, my joy" near the track's end.

Black rage obviously emerges in songs like "Black Rage," her Ferguson-inspired anthem of discontent, and arguably in her biggest hit single to date, "Doo Wop (That Thang)." In both cases, the rage conveys a measured disappointment in America and in men and women who reduce the beauty of interpersonal relationships into dehumanizing struggles for power and pleasure. "Doo Wop" decries "punk domestic violence men" and all who reduce the wonder of sexual encounter into a transactional pursuit of "that thang."

"Black Rage" too seeks to resist this kind of "over-commoditization," as Ms. Hill previously described in reference to the song's aim. "As artists, we have an opportunity to help the public evolve, raise consciousness and awareness, teach, heal, enlighten and inspire in ways the democratic process may not be able to touch," she told Rolling Stone. "So we keep it moving."

The glories of Ms. Hill's "Nothing Even Matters" (composed with her fellow black joy/black rage artist D'Angelo, author of 2015's landmark album Black Messiah), when seen alongside her "Lost Ones" track, encourages listeners to press on even though our emancipation hasn't necessarily resulted in equal economic and political opportunity.

"Now some might mistake this just for simple song," Ms. Hill sings during the last verse of "Lost Ones," after playing with the tension between emancipation from a bad relationship and political emancipation. She suggests that destructive rage and creative joy share a cyclical connection like night and day: "Even when you're gone you can still be reborn/ And, from the night can arrive the sweet dawn."

Ms. Hill's entire catalog holds together the immortal gladness of black religious commitments and the battering-ram justice of Black Lives Matter activists. The premium Ms. Hill places on serenity in the face of unthinkable catastrophe speaks to what Black Lives Matter co-founder Patrisse Cullors calls a "healing justice." If one accepts this juxtaposition, Ms. Hill's work — and perhaps that of D'Angelo as well — offers an existential resolution of the dissonance many posit between black joy and black rage.

I confess that this offering may be too neat, perhaps too polished, too indulgent, too insistent on associations which are not intrinsically present in Ms. Hill's work. All of that may be true.

Nevertheless, it seems fruitful to envision a world beyond the false choices of racialized capitalism, which opposes the spontaneous pleasures of intimacy witnessed in Ms. Hill's "A Sweetest Thing" and the elaborately constrained divine reversals and social revolution latent in "Mystery of Iniquity." It's a world where black folks can enjoy romance and robust legal protection in still-racist America, frolic in playgrounds and on Playstations and overcome the tired culture change versus structural change debates; a world where having a thriving social life harmonizes with an uncompromising insistence on socialist political economy.

Such a world seems afar in the distance. But when I hear the music of Ms. Hill, I hear the sounds of freedom now, freedom here. I hope you do, or will, as well.