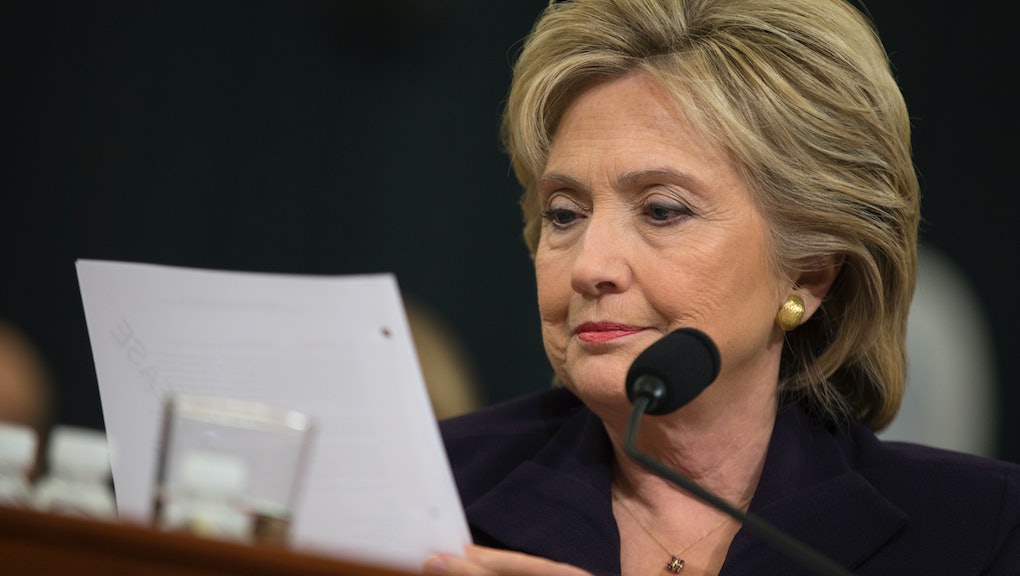 Google Hillary Clinton online, and it won't take long to repeatedly stumble upon the terms "email scandal" and "Benghazi." But what did Clinton actually do, and should it be enough of a concern to reconsider a vote for the former secretary of state?

What happened: During her four years as secretary of state, Clinton did not use her official government email address and instead used a private email on her own personal server for correspondence — some of which contained "top secret" information. However, during those four years, the issue was not addressed — or at the very least, went unnoticed — by the State Department.

In fact, it wasn't until 2013 when a hacker named "Guccifer" was able to access the account of a former Clinton White House aide, Sidney Blumenthal, that Clinton's personal domain was leaked in a screen grab. The image revealed that the two spoke about foreign policy issues, though it did not garner a lot of initial media attention.

How Benghazi came into play: In the summer of 2014, State Department officials were responding to a formal request by the newly formed House Select Committee on Benghazi — which wanted to examine government policies related to the consulate attack in 2012 — and realized that there was no correspondence from Clinton's State Department email account. Of course, it would seem odd for anybody to have a completely empty work email account, but especially a high-profile government official.

The State Department then formally asked Clinton to turn over her emails from her personal server, to which she provided over 50,000 printed pages of emails. From the tens of thousands of emails, the Department turned over about 900 pages in reference to Libya to the House Committee.

The aftermath: At first, the remainder of the emails were not readily available to the public, which prompted Clinton to tweet out her support of the emails going public.

The same month, Clinton said that she set up the personal server system so that she wouldn't have to carry several devices around, and it was simply a matter of "convenience." The media, however, wasn't buying it.

"The current protocols do afford public officials too much control over the public record," Josh Voorhees wrote for Slate. "But simply because the system is broken isn't a reason for her to have gone to unprecedented lengths to operate outside of it."

It would've helped her credibility if she hadn't jokingly described herself as being "two steps short of a hoarder" in the past. Additionally, more than 1,200 of the emails analyzed have been "retroactively classified," an alarming sign that she had valued personal privacy over security.

Since then, the Department has released the personal emails in waves, starting in May of 2015. However, the scandal presented GOP candidates running in the 2016 presidential election an opportunity to use it to attack her credibility for the 2016 Democratic nomination.

What it means for Clinton's campaign: While Republicans are unsurprisingly using the email scandal as a means to tarnish her reputation ahead of the election, it has also had an effect on Democratic and independent voters. According to a CNN/ORC Poll of registered voters, 63% of self-described independents and 30% of Democrats believe that Clinton had done something wrong by having a private email server.

It wasn't likely, though, that her presidential campaign would've been without some scandal. After all, however small, there is usually some semblance of controversy in a candidate's past when running for commander in chief. As FiveThirtyEight's Nate Silver noted, it might unavoidable.

"The challenges Clinton's campaign has faced — and the media narrative about an 'unexpectedly' competitive race — is exactly what you'd expect relative to the historical experience of campaigns like hers," Silver wrote. "Being the heavy favorite to win the nomination does not mean you expect to go 162-0."

It certainly helps that her chief competition for the Democratic bid — Vermont Sen. Bernie Sanders — has not taken any media bait with regard to the scandal, instead hoping to focus on substantive issues during the debates. In the end, he's right: We don't need to hear anymore about "damn emails."

Rather, the scandal boils down to one's personal opinion on the former secretary of state. Those who dislike her can attribute the controversy to her propensity to be a control freak, while simultaneously being a private individual in a public competition — a difficult combination. Conversely, Clinton admirers will see that being an inherently intimate person doesn't undermine her ambition to run for office — it never has in the past — and that she'll take Republicans and investigations head on, without complaints.