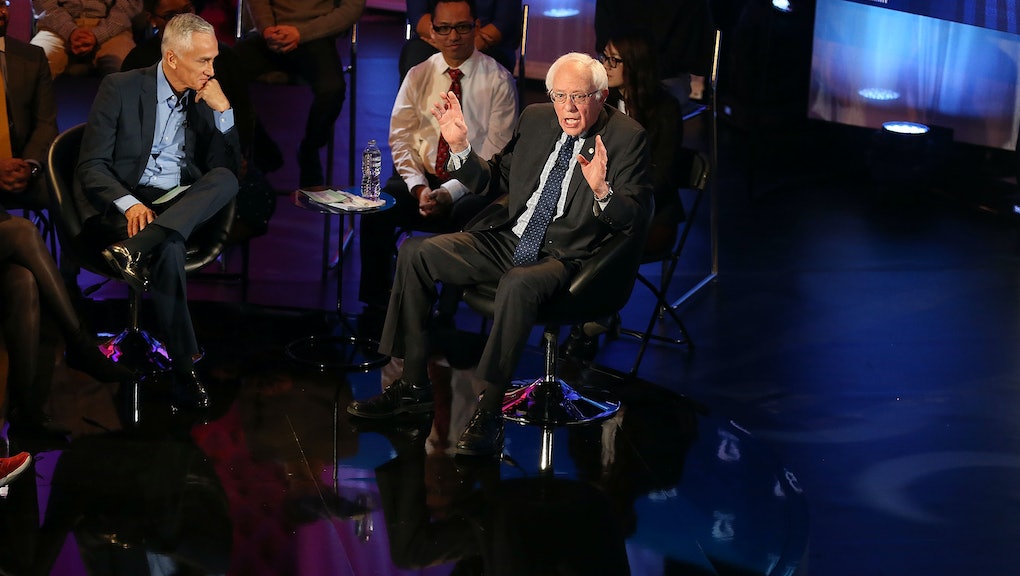 Here's What You Need to Know About Monday's Brown & Black Forum

The forum wasn't a debate — the candidates took turns onstage one at a time answering questions — and the conversation didn't break any substantial new ground. The moderators mainly tossed the candidates softball questions, and they hit singles and some doubles but no home runs. Often it seemed that the forum, which was sponsored by Fusion, was less an attempt at provoking the candidates than it was meant to be an educational experience for a liberal voter who cares about marginalized communities but hasn't quite been able to keep up with every detail of the presidential campaign news cycle.

That being said, there were some enlightening exchanges between the moderators and the candidates, and Hillary Clinton in particular had some unexpectedly meaty responses to prompts about societal double standards when it comes to what kind of people are identified as terrorists. And she also made it clear there was some daylight between her and President Barack Obama on the issue of handling immigrant raids. Here's a quick rundown of the most notable moments of the evening.

Sanders was up first, and he did a solid job of offering his usual talking points on everything from gun control to immigration.

Sanders confidently defended his gun control record on background checks and brandished his D- record from the National Rifle Association with pride. When asked if he once made a mistake by voting in favor of a bill that shields gun manufacturers from lawsuits, he flatly refused to apologize for his past support, but indicated the issue was one he was willing to revisit.

"If you're a gun manufacturer who's selling guns into an area — you're selling a whole lot of guns, and you have reason to believe that a lot of those guns are not meant for people in that area but are being distributed to criminal elements — should you be prosecuted? Damn right," Sanders said. "So I think what we have to do is take a new look at that legislation and get rid of the provisions."

Sanders' response suggested he's shifted in his views on how responsible he thinks gun manufacturers are for the gun crisis, although according to the Huffington Post, the reason Sanders gives for wanting to revisit the bill he signed — knowingly transferring firearms to criminals — is in fact already considered an exception to that law. In other words, his position was more about optics than it was a demonstration of his knowledge of problems in gun law.

One of the best questions of the night was posed by New York magazine writer Rembert Browne, who brought attention to a criminal justice reform initiative that's often overlooked — the manner in which police union contracts rig accountability systems so police misbehavior is shielded from proper scrutiny. Noting that in some cities these contracts allow police to have days to prepare before questioning or allow them to review evidence against them before an interview, Browne asked: "As president will you challenge police unions to reform their contracts to encourage more public trust?"

Sanders' response fell short of a commitment to addressing that specific issue, but he appeared open to considering it.

"I think what we want to have are are police departments that are supported and appreciated by the communities, not seen in an antagonistic way," Sanders said. "So any and all ways that we can do that make sense to me."

Next up was O'Malley, who has failed to rise significantly in the polls as Sanders has crept up close to Clinton, but has consistently offered unabashedly progressive policy proposals that are different from both his competitors. O'Malley said was proud of being "to the forward of" Sanders and Clinton on immigration, his characterization of how he believes his stance on allowing people into the country that has been more compassionate and inclusive for longer than the both of them.

Unfortunately for O'Malley, the most notable note of the evening for him was when he scrambled to answer a question about how 82% of his campaign staff is white. After naming a couple of staffers he chose to use the fact that he "probably the smallest staff of any of the three [Democratic] presidential candidates" as his main defense. He then went on to say he had an impressive record on diversity in staff and appointments as mayor and governor.

Clinton went last, and in many ways her appearance was the most interesting. Early on she made it clear she was critical of the Obama administration's handling of deportation raids, which have generated a great deal of criticism from supporters of progressive immigration reform in the past week.

"I do not think the raids are an appropriate tool to enforce the immigration laws," Clinton said. "In fact I think they are divisive, they are sowing discord and fear."

She emphasized her concerns with ensuring that undocumented immigrants — especially children — are given due process when going through the immigration system.

When asked by Browne, "Do you believe that white terrorism and extremism is as much a threat to some in this country as something like ISIS?" Clinton had a thoughtful response.

She described white extremists who target civilians as meriting the label of "terrorist."

"I remember very well going to Oklahoma City and seeing the rooms of the federal building where I recall 168 Americans including 19 children were murdered by a bomb, by a guy who hated the government," Clinton said. "That's terrorism, as far as I'm concerned."

Most strikingly, she said the police were capable of committing terrorism when they abused their authority,

"I think that when you have police violence that terrorizes communities, that doesn't show the respect that you're supposed to have from protecting people in your authority," Clinton said. "That can feel also terrorizing."

Ultimately, she said all forms of violence that has the effect of terrorizing a population had to be tackled, and that international terrorism may receive more attention because people find something particularly pernicious about attacks from foreigners.

"There are so many different kinds of potential violent acts and we have to go after all of them," Clinton said. "It becomes higher profile when it's tied to international terrorism because that seems like it's coming from the outside."

All in all, the forum was an uncontroversial affair. No candidate screwed up, and the words exchanged won't shake up the fundamental dynamics of the race. But it was an intimate environment for learning about some of the nuances of the candidates' positions, which isn't something you can say about a number of the gladiatorial presidential debates so far this cycle.