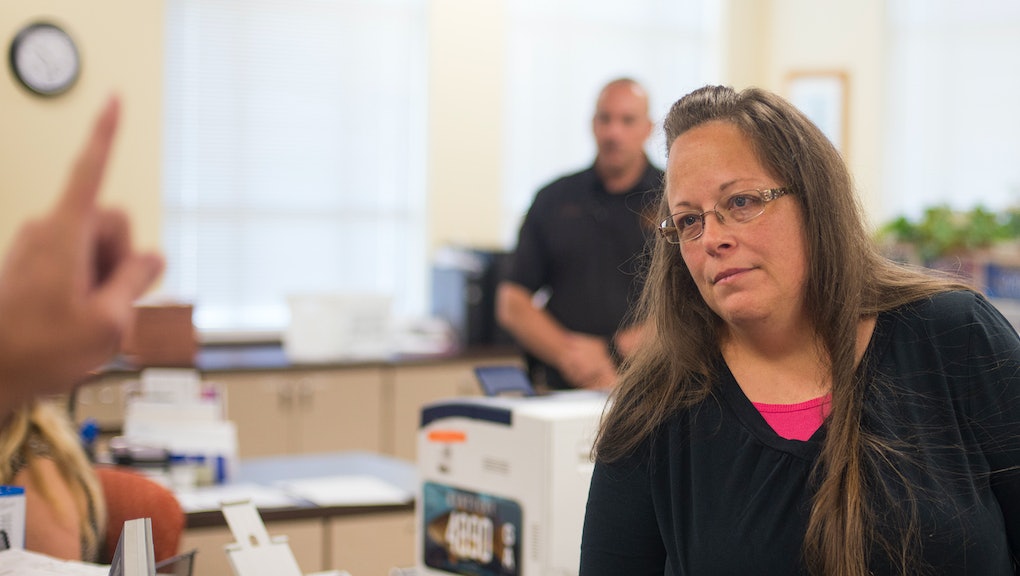 Kim Davis, the Kentucky clerk who went to jail in September after refusing to issue marriage licenses to same-sex couples, will attend President Barack Obama's final State of the Union Address Tuesday, the Washington Examiner reported.

Davis and her attorney, Mat Staver, scored an invite to the speech as part of the House with the help of the Family Research Council, which opposes same-sex marriage, the Examiner said Monday.

The Rowan County clerk got locked up for contempt of court in September after she refused to issue marriage licenses despite a federal order that she do so in accordance with a Supreme Court ruling that said states cannot block same-sex couples from marrying.

At the time, Davis said her Apostolic Christian faith did not allow her to grant the licenses — a contention that earned her the support of some political and religious figures. It also spurred a rebuke from White House spokesman Josh Earnest, who said after Davis went to jail that "there is no public official that is above the rule of law."

The Family Research Council didn't immediately respond to a request for comment, but The Hill reported that a source confirmed Davis would be present at the speech.

J.P. Duffy, vice president for communications for the Family Research Council, which held a "State of the Family" also retweeted a link to the Examiner story.

The other side of the same-sex marriage debate will also be represented at Obama's speech. Jim Obergefell, the plaintiff in the landmark case that legalized same-sex marriage nationwide, will sit with first lady Michelle Obama during the address.

This isn't the first trip to Washington for Davis: She quietly met with Pope Francis there last September.