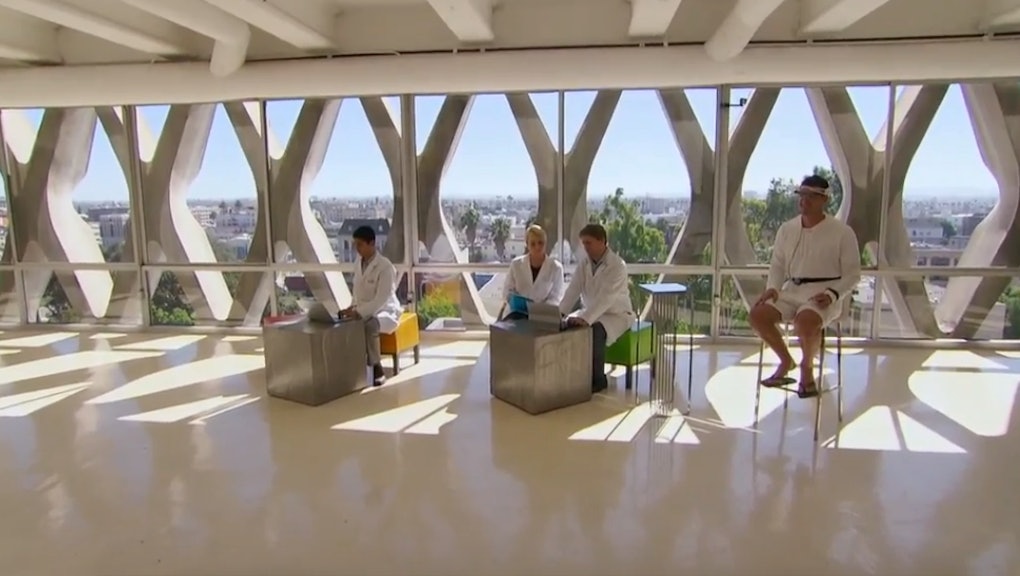 Here's the Truth About "Dr. Love," the Sketchy Sex Scientist on 'The Bachelor'

One of the group dates on Monday's episode of The Bachelor took a turn for the high-tech — or so it seemed.

Ben Higgins, a 27-year-old software salesman from Indiana, took the gaggle of women vying for his heart to the "Love Lab," a futuristic-looking laboratory that Higgins claimed would help him learn "if science can actually help me find love." Here, the contestants underwent a series of tests and received numerical scores — scientific indicators, apparently, of who is most compatible with Higgins.

"It might be nice if data could lead me to the right woman," Higgins told the women.

At the Love Lab, there was some kind of eye sensor that detected whether the women's gazes were drawn to a photo of babies or to a photo of diamonds (yes, this show is real). There was an infrared camera that revealed Higgins' body heat as he sat, one-on-one, with each woman on a bed. And there was a "smell test," wherein a blindfolded Higgins sniffed each lady to determine whose natural body aroma he'd most like to smell for the rest of his life — or at least for the 17 days they will likely continue dating after the show ends.

Unfortunately — much like the notion that you can find the love of your life on a reality TV dating show — the Love Lab's legitimacy is somewhat questionable. Perhaps we should have guessed that when the lead scientist was introduced as "Dr. Love," and when ABC designed the set to look like this:

Who is Dr. Love? That would be Paul J. Zak, the neuroeconomist best known for his work involving oxytocin — the so-called "cuddle hormone" released when we're physically close to other people. According to Zak, oxytocin underlies all of our social interactions and affects how moral and trustworthy we are.

"It affects every aspect of social and economic life," Zak told the Guardian, "from who we choose to make investment decisions on our behalf to how much money we donate to charity. Oxytocin tells us when to trust and when to remain wary, when to give and when to hold back."

The more oxytocin flowing through our systems, the better we'll be as a society, Zak reasons. To get that oxytocin flowing, we should all start hugging each other more, Zak said in a 2011 TED Talk.

"My penchant for hugging other people has earned me the nickname Dr. Love," he said. "I'm happy to share a little more love in the world, it's great, but here's your prescription from Dr. Love: eight hugs a day."

"We have found that people who release more oxytocin are happier," he continued. "And they're happier because they have better relationships of all types. Dr. Love says eight hugs a day. Eight hugs a day — you'll be happier and the world will be a better place."

It's a nice thought, but not all are onboard with Dr. Love's ideas.

In an article for Slate, science journalist Ed Yong argued that Zak's theory about oxytocin turns science into too much of a "tidy fable."

"It not only tells people what they want to hear but also makes them feel delightfully subversive for understanding the secret simplicity of the world," Yong wrote. "One molecule underlies morality? Seems far-fetched, but not impossible. Hugs can change the world? Everyone likes hugs!"

As Yong pointed out, though past research has pointed to oxytocin's benefits, it's also been shown to have a "darker side."

"The 'love hormone' fosters trust and generosity in some situations but envy and bias in others, and it can produce opposite effects in different people," he wrote. "A more nuanced view of oxytocin is coming to light — one that's inconsistent with the simplistic 'moral molecule' moniker."

What is LoveLab Technologies? Probably not a real company — at least, not one with that name, and that exists in the space we saw Monday night on ABC.

If you Google "LoveLab Technologies," the name on the door the Bachelor contestants passed through, you'll only get a few potentially feasible matches. One is the Love Lab at the Massachusetts Institute of Technology, a team affiliated with the Koch Institute for Integrative Cancer Research at MIT.

A representative from MIT's Love Lab confirmed to Mic that they were in no way affiliated with Monday's Bachelor episode. "We do immunology stuff," he said. This 1996 video of an infrared "dating game" from MIT appears to be unrelated as well.

More Google search results will direct you to a dating app created by mother-and-son matchmakers Steven Ward and JoAnn Ward — the people from VH1's Tough Love. The app, Love Lab, is all about authenticating the dating profiles of the people you match with, to make sure your dating process is as safe and trust-filled as possible.

Monday night, around the same time The Bachelor was airing, Steven Ward was hosting a call-in show for people with love, dating and relationship issues. His Facebook page had no mention of anything Bachelor-related.

Ward confirmed via email that his app had nothing to do with the show. "We appreciate the positive message The Bachelor is sending about conscientiously coupling," Ward told Mic, "and although Love Lab is a great way for The Bachelor or anyone else to predict chemistry, we did not participate in the production of the show."

When Mic placed a call to the agent who manages the American Cement Building's leasing, she said that she was not interested in talking.

What was that robot? When the contestants exited the elevator into the Love Lab, they were greeted by a robot with Dr. Love's face. Careful pausing of the episode revealed the company behind the robot: Double Robotics. Could it unlock the Love Lab's mysteries? Mic placed a call.

Nope. Double Robotics was not behind the Love Lab either. Producers from The Bachelor reached out to borrow one of the company's robots, and the producers refused to elaborate on how the robot would be featured on the show.

"When they reached out asking us to borrow a Double, they didn't even tell us what the use case was going to be," Sara Broyles, who heads up communication at Double Robotics, told Mic, adding that the process was "quite secretive."

"I did not even know what the use case was going to be until watching the episode," she said.

The most likely explanation? "LoveLabs Technology" is a Bachelor-friendly version of Zak's company, ZESTx Labs, which measures people's neurological responses to consumer experiences.

Zak wore a lab coat emblazoned with ZESTx's logo on Monday's episode. Talking about the episode on Twitter, he said, "my lab does science to help Ben."

On Twitter, Zak also referred to the American Cement Building as a "set," suggesting the location is not his lab's primary place of business.

Is the science itself bunk? Actually, some of these experiments check out.

Studies have shown that bodily smells do play a role in attraction. A 2014 study found that we're attracted to the body odor of people whose political views align with our own.

"People could not predict the political ideology of others by smell if you asked them, but they differentially found the smell of those who aligned with them more attractive," lead author Rose McDermott said, according to the American Journal of Political Science, in which the study was published. "So I believe smell conveys important information about long-term affinity in political ideology that becomes incorporated into a key component of subconscious attraction."

This study, from 2001, asked men to judge the odors of women's shirts when the women were ovulating, and when they were not. The men rated the shirts worn during women's ovulating periods as smelling "more pleasant and sexy" than those worn during women's non-ovulatory phases.

"These findings suggest that ovulation may not be concealed and that men could use ovulation-linked odors in their mate selection," the researchers wrote.

Perhaps Higgins was merely smelling which woman he could most likely impregnate, in that very moment.

Sadly, there's no science on whether you should date the woman who likes babies or the one who likes diamonds. That's a choice only Higgins — and a slew of awkward rose ceremonies in the Bachelor mansion — can determine.