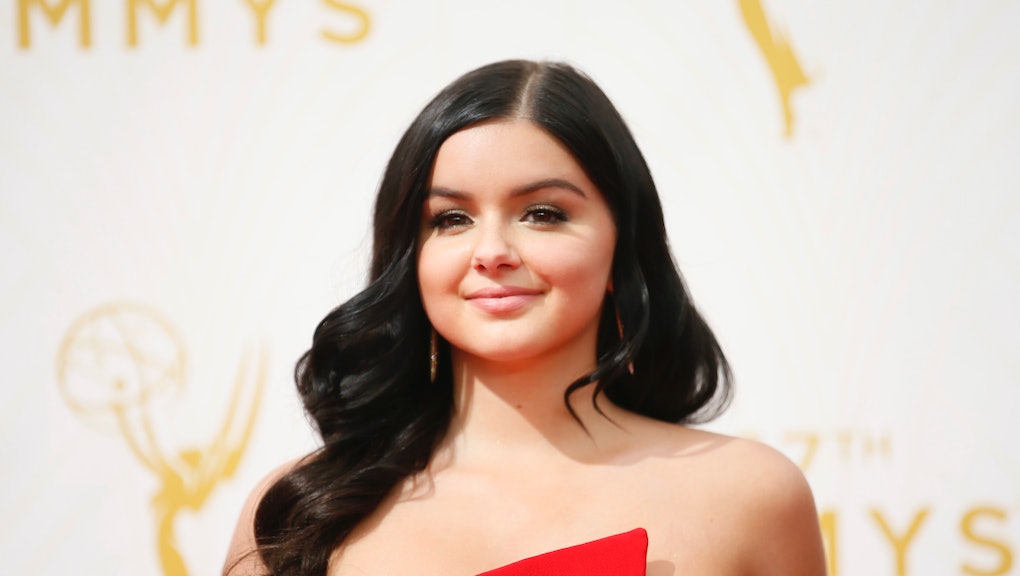 Vine star Nash Grier may want to leave his homophobic past behind, but at least one actress isn't letting him forget it.

Modern Family star Ariel Winter took Grier to task Sunday on Twitter, tweeting as part of the 18-year-old Vine sensation's #FavNashVid trending topic. Winter's favorite video, she said with tongue firmly ensconced in cheek, was "that one time when he was just super homophobic and ignorant?" She chased her shot with a stinger: the hashtag "#whydoyouhavefans"

Winter is referencing a Vine from April 2013 in which Grier angrily confirms his belief that HIV is "a gay thing," then yelling the word "fag." The Vine made waves at the end of 2014, at which point Grier tried to explain that he made the video when he had only a thousand or so followers and didn't realize the effect his word has. Grier now has 12.4 million followers on Vine.

It's also worth noting that Grier has used the words "gay," "fag" and "queer" in derogatory fashion dozens of times on Twitter.

Winter got some backlash from Grier's fans after her tweet, leading her to publish a full essay in response dragging Grier not just for his homophobia, but also for other videos. "Just because you had no following back then does not make what you said okay," she wrote. "I can't even believe that you would use that as an excuse!"

Among other issues she points out with Grier's social media presence — "tweeting 'getting paranoid when there's a Muslim around,'" "made a vine mocking how Asian people name their kids" — Winter took Grier to particular task over "a completely misogynistic video" he made about women. The video in question, since deleted from Grier's YouTube channel, featured the teen and his friends describing their ideal girl and criticizing women who don't live up to that ideal.

"You say that we have to shave our entire bodies (including our arms?!) to be attractive and that our peach fuzz around our lips is super gross to kiss," Winter wrote. "We also have to entertain you at all times! So along with being homophobic, you are also lowering women's self-esteem!"

Grier responded to Winter's essay by calling her opinion "far from reality" and asking to explain why in her DMs. Winter happily declined.

Winter's essay gets at what's become an inarguable truth in 2016: Being a star comes with a hefty social justice component. Simply being complacent and not arguing for change is unacceptable — being non-progressive is even less so. Winter argued that, in essence: Grier's apology was the only way to not affect his business.

"You and I are fortunate enough to have access to television, the internet, magazines, etc. that daily stress to us the importance of social and racial tolerance," she wrote. "You only apologized for that video and stopped using that phrase after it started affecting your pocketbook and chipping away at your fame."

In conclusion, Winter wrote, she believes Grier is indeed part of that non-progressive guard even now. "I wish you were inspiring our generation and working toward change like the rest of us, but unfortunately, you are not," she wrote. "So no, I don't believe your views have changed, I just believe your forum for spouting them has changed."