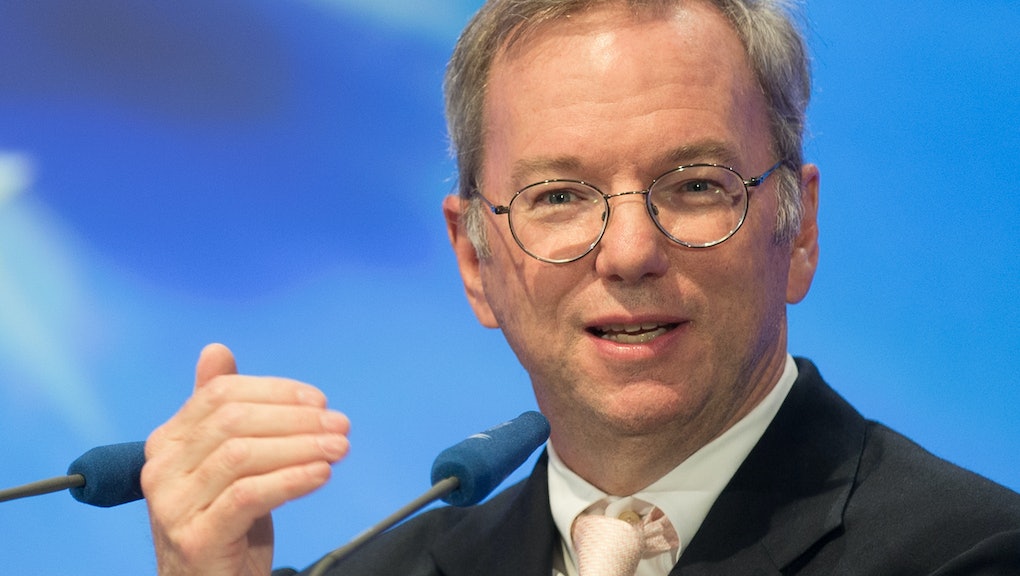 It's OK, Google Chairman Eric Schmidt Doesn't Know What to Call Google Either

Alphabet executive chairman Eric Schmidt firmly believes artificial intelligence will solve some of the biggest problems of our time, like climate change, increasing population sizes and even issues in education. He discussed these issues in a conversation about AI at a convention in New York, as reported by Bloomberg Businessweek.

Artificial intelligence can help people solve day-to-day problems both at work and in the home. Schmidt said the manifestation of AI in our personal lives as a sort of digital personal assistant he called "Not-Eric," which he hopes to someday own. "Eric" would be the flesh-and-blood Schmidt, he said, and "Not-Eric is this digital thing that helps me."

On a larger scale, the company's investments in AI reflect indicate that Alphabet Inc., Google's parent company, believes it can change the world beyond digital assistants. Schmidt said artificial intelligence can sift through vast amounts of data and serve up analysis quickly. Schmidt said this will help scientists and engineers solve the "hard" problems.

In 2014, Google acquired London-based DeepMind for $400 million, Re/code reported. DeepMind uses artificial intelligence in gaming, e-commerce and simulations. Since then it's been working on teaching computer networks to make decisions, according to Wired. In October, Google made another AI investment, estimated to be worth tens of millions of dollars, into a Chinese company called Mobvoi, according to TechCrunch. Mobvoi specializes in voice-controlled software and has worked with Google in the past on Android Wear, Reuters reports.

Alphabet also dumped tons of funding into its self-driving car project, which is heavily reliant on artificial intelligence.

Still, Schmidt recognizes Google isn't the only company interested in AI. Facebook, Microsoft, Apple and others are also cultivating intelligent software. But he thinks as these companies race to build artificially intelligent products, there's an opportunity for them to work together on a set of principles and strategies for growing AI.

Alphabet? Google? While Schmidt is certain about the road tech companies need to take to ensure the future of AI, he seems less certain about what to call his company. If Google's renaming has baffled you, rest assured the company's higher-ups aren't entirely sure what to call it either.

"Every single advance has occurred because smart people got in a room, and eventually they standardized approaches," Schmidt said. "The promise of this is so profound that we — Alphabet, Google, whatever our name is at the moment — are working incredibly hard to advance these platforms."