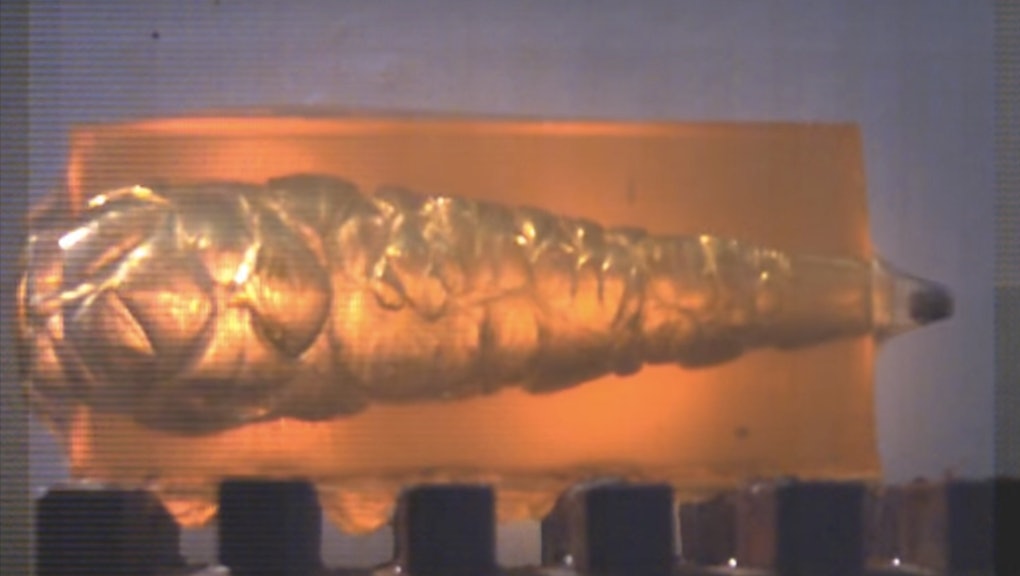 When someone gets shot in a movie, you never see the full devastating effects of the bullet. But these movies are different.

If you're not a soldier, police officer or gun enthusiast, you might not realize that there is an unending variety of bullet types, loads, shapes, purposes and effects. Ballistic experts are constantly testing bullets against different materials, at different ranges and with different weapons. Sometimes it's to know whether they'll penetrate a bulletproof vest. Sometimes it's helping a manufacturer determine if their ammunition is made well.

Sometimes it's to show what happens when they're fired into human bodies.

This particular video was shot at 2907 frames per second of a hollow-point bullet shooting into a brick of gelatin — a bullet designed specifically to split apart on impact and create massive wounds:

Imagine that's a body: So what did the unsuspecting gelatin do to deserve such a fate? Why use gelatin at all? Morbidly, ballistic gelatin is meant to closely mirror the consistency of human flesh and muscle tissue. By examining the behavior of the gelatin, forensic experts can estimate the effects of a certain type of weapon and munition on a human body.

These videos are actually plentiful on YouTube, where everyone from gun enthusiasts to ballistics testing companies like Brass Fetcher have entire channels dedicated to showing gel tests with various weapons, speeds and types of ammunition.

Once you've seen a few of these videos, though, you've mostly seen it all — which is not to say that gel tests are necessarily boring, but that to the untrained eye, ballistic devastation looks mostly the same, with varying degrees of horror.

Watch the 14-second video from EffectiveAffect below: