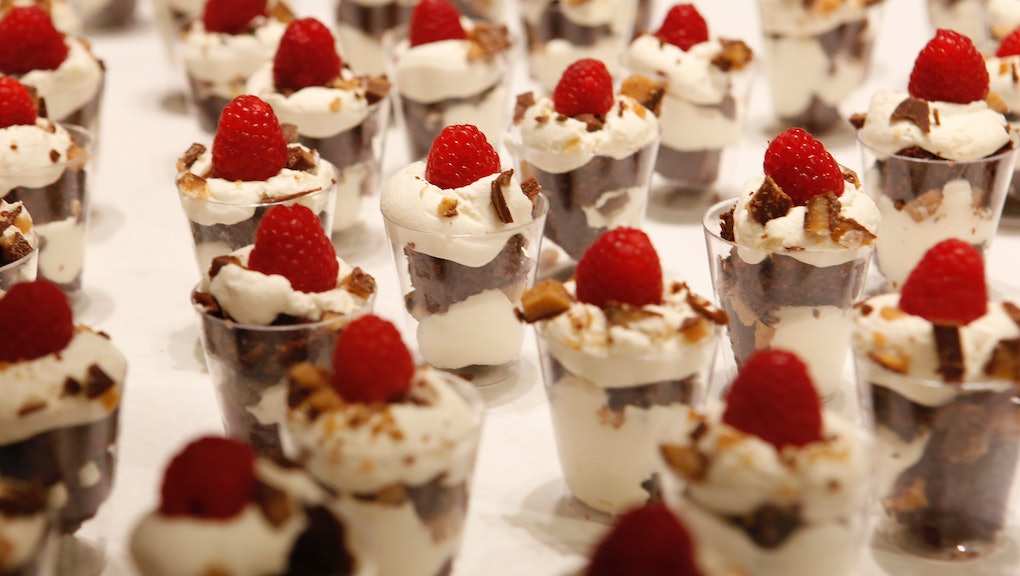 A new study by Cornell's Food and Brand Lab, "The Waiter's Weight: Does a Server's BMI Relate to How Much Diners Order?" shows that we are more likely to order more food from a heavier server — someone with a high body mass index (weight-to-height ratio) — than from a server with a low BMI.

Researchers Tim Doering and Friedrich Schiller looked at 497 customer-waiter interactions across 60 restaurants of the Applebees and TGI-Friday's variety, and found that patrons were four times more likely to say yes to dessert from servers with high BMIs, from whom they also ordered about 18% more alcohol.

"We are tremendously susceptible to cues that give us a license to order and eat what we want," Doering said. "A fun, happy, heavy waiter, might lead a diner to say, 'What the heck' and to cut loose a little."

Still, Doering's adjective-laden, erm, characterization also suggests that disposition plays a role in a customer's choices: a jovial, enabling waiter (of any size) might succeed in cajoling a table into another drink, then a little dessert. Or, as the study suggests, slender, possibly dieting diners may feel more comfortable ordering with abandon when faced with a more substantial server, rather than one whose body more closely resembles their own. The fear of judgment, perhaps?

Whatever the particular reason, as the study notes, these findings are meaningful for restaurant-goers and restaurant owners, as well as for the public's health: As Charlie Sorrel at Fast Company  out, "Instead of shunning overweight hires, restaurants may embrace or even encourage them," upping their profits by subtly nudging customers toward a bigger tab.

As underhanded as this may seem, the study's authors note that the results "provide valuable evidence in recent lawsuits against weight discrimination," which are hard to prove — fat shaming takes many forms. Michigan is the only state with laws specifically prohibiting discrimination on the basis of weight, and while the Americans with Disabilities Act covers "severe" obesity, that leaves many people unprotected. Yet if it's too high, a person's weight can count as a strike against them in the job application process, especially in client-facing fields — of which hospitality is certainly one.

Like racial discrimination, weight discrimination occurs when a person is treated in a particular manner because of appearance — in this case, because of their size. Usually, a higher BMI could prove a hurdle to securing employment, but if restaurants heed this study's research, it could become a boon.

Any way you slice it, though, singling out anyone because of their weight remains a troubling trend. So go ahead, get dessert. Get 10 desserts; just don't blame your waiter — or science — if you do.