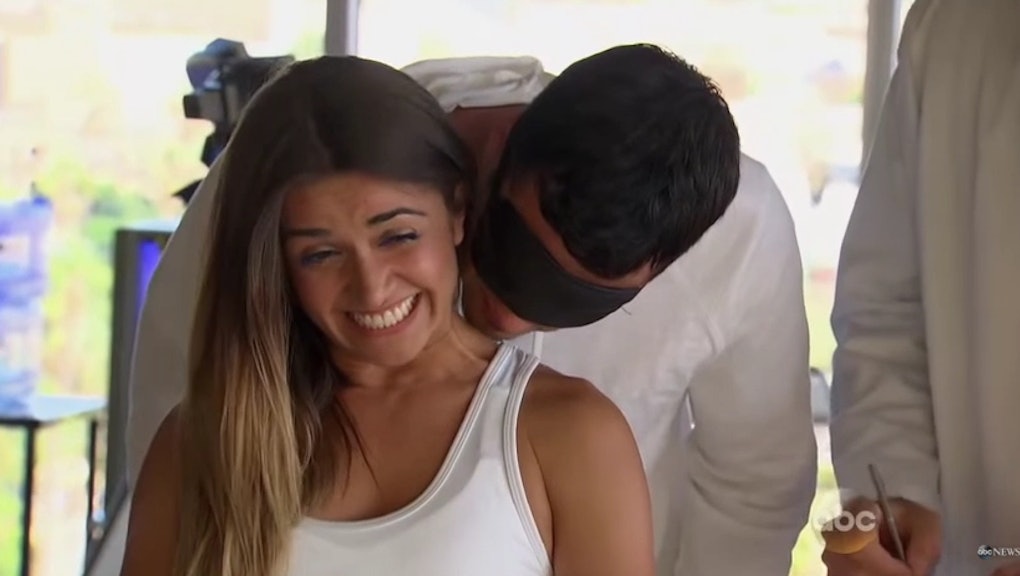 It's only week two of The Bachelor, which means that we're still in the stage of awkwardly-competitive group dates with bizarre themes and special guests (not quite the stage that involves traveling around the world and making-out in helicopters and hot-air balloons).

Monday's episode kicked off with Ben and a gaggle of women setting off on a high school themed (ew, why?) group date, which featured typical high school subjects like volcano making, ball throwing, apple bobbing and running a race that ends in Ben's arms.

Before the women can graduate from "Bachelor High," someone obviously has to be named homecoming queen, and it's Mandi. Mandi gets to wear a tiara and a varsity jacket and everyone else gets to feel jealous.

The date continues with a chill hang out sesh, during which everyone competes ferociously for some alone time with Ben. Jennifer snags a kiss from Ben and then immediately goes back to the rest of the crew and tells them all about it. Guess who doesn't like that? If you guessed Lace, you're right.

While all this is going on, the girls back at the mansion are eagerly awaiting their date card. Do they all have to hang out together in the living room and wait for the news all day? Can anyone just be like "Hey guys, I'm going to go swimming, catch you later"? Anyway, Olivia is shocked that Caila gets the first one-on-one with Ben instead of her.

Meanwhile, on the date, Lace tries to tell Ben about the "real Lace." The real Lace is sorry for coming on too strong on the first night. The real Lace loves Denver.

Then Jubilee has an emotional moment with Ben where she opens up about living in an orphanage in Haiti when she was little. JoJo opens up to Ben by kissing him on the roof.

The next day, it's time for Ben's one-on-one date with Caila! Only it turns out that it's not actually one-on-one because Ice Cube and Kevin Hart are also there — to accomplish the dually important tasks of "helping" Ben and promoting Ride Along 2.

Everyone is required to scream and clap when Ice Cube and Hart walk into the mansion to pick up Ben and Caila. Then Ben awkwardly back-slap/hugs Hart. This date is already off to a great start.

Ben and Caila have a nice, boring conversation while they "ride along" (get it?) with their celebrity chaperones. Ben asks Caila lots of personal, probing questions like "what's your favorite color?" Ben's favorite color, by the way, is blue. Because blue is for boys.

Ice Cube and Hart accompany Ben and Caila to a hot tub store, which is probably one of the weirdest locations for a Bachelor date ever. Then they actually get into a hot tub with Hart and the whole time Caila is doing that thing where her mouth is smiling but her eyes are saying "Why did I have to get a hot tub store date instead of a beach picnic date? Why me?!"

Don't worry Caila, because the date's not over yet! There's still plenty of fun stuff left. Hart and Ice Cube ditch the lovebirds, and Ben and Caila go off to a romantic restaurant, where Caila tells Ben about how she met her last serious boyfriend on a plane and he's all like, "Thank you for opening up to me."

Then they leave the restaurant (without touching their plates!!!) and go off to the final stage of the date: a private concert with Amos Lee. The Bachelor  loves private concerts even though they seem like the most awkward thing in the world. Caila, apparently, loves them too because she is having a swell time swaying in Ben's arms.

Believe it or not, there's still one more group date to go in this episode, and this one is "science" themed! The women show up at a "science" place and find Ben wearing a white lab coat and goggles.

A "scientist" named Dr. Love explains that they will be conducting a series of tests to find out who is the best match for Ben. According to "science." These tests involve Ben going around and smelling everyone while they're all nice and sweaty.

Olivia wins the "science" test and is named most compatible with Ben. She also gets the date's rose, and later that night she probably whispers "Olivia Higgins" a million times into her pillow.

Also on that date, Amanda opens up to Ben about her daughters and he is obviously super nice about her having kids because he is a nice guy. Ben has never done a not nice thing in his life.

FINALLY it's time for the cocktail party. The slow-motion train wreck that is Lace continues to derail: She pulls Ben aside to, um, describe a childhood photo of her in which she looked dorky? Not even the real Lace understands what's going on in this moment.

Ben is maybe weirded out by this, but he's too nice (of course) to say anything. Instead he goes around giving out thoughtful little presents like a chiseled, all-American version of Santa Claus.

The rose ceremony is here at long-last, and there's a shocking surprise! When LB gets called down for her rose, she politely declines and decides to leave the show all on her own, which is a very, very sane thing to do. BUT it also opens up the possibility of a surprise LB return somewhere down the line.

The rest of the rose ceremony goes off without a hitch, and three girls are sent home. This means that JoJo, Caila, Olivia, Amanda, Jubilee, Lauren B, Lauren H, Leah, Becca, Rachel, Jennifer, Emily, Jami, Shushanna, Haley, Amber and Lace are all still in the running toward becoming America's next top Mrs. Ben Higgins.

Tune in again next week for more exciting Lace drama dates and stuff.