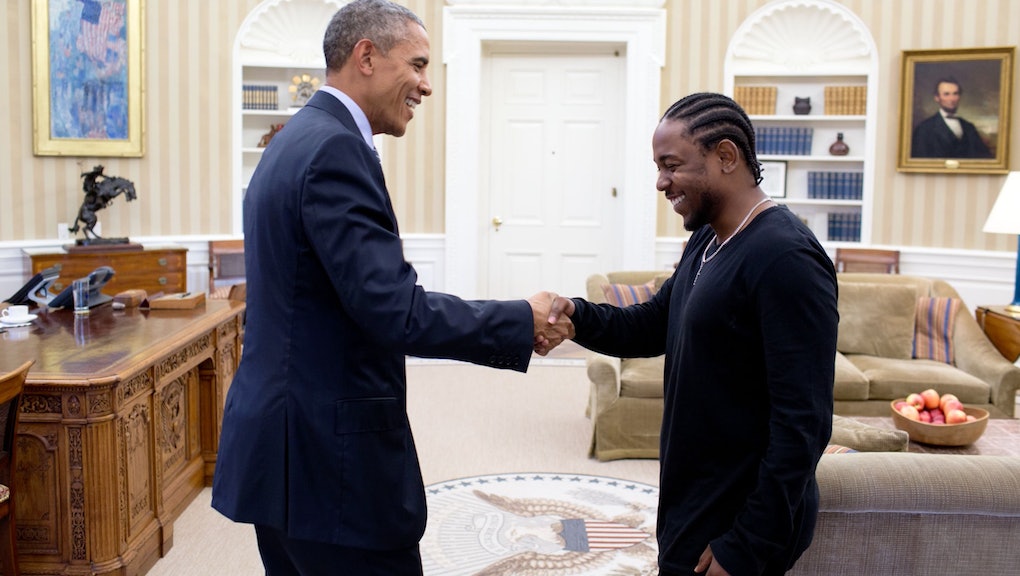 Back in December, President Barack Obama revealed his favorite track of 2015 in an interview with People magazine: Kendrick Lamar's "How Much a Dollar Cost." It's a deep cut off Lamar's March-released To Pimp a Butterfly, intended to communicate the message, "Help as many people as you can," as Lamar explained it to a TMZ photographer. "You won't live forever."

It's thoughtful messages like these hidden throughout Lamar's albums that have elevated him to the level of hip-hop visionary. It's also won him the favor of the country, from his home state of California all the way to the White House. He's now setting himself to spread his messages even further. On Monday Lamar shared news he would be teaming up with the White House and the National Mentoring Partnership to help turn people on to the importance of mentorship.

He tweeted out a PSA he filmed, which shows him playing basketball with a young kid while sharing stories of the mentors that inspired him.

"As a kid, having a mentor was vital to me," Lamar says in the video, titled Pay It Forward. "[A mentor] always been there when it counted, allowed me to make some of the most important decisions while growing up. So it's only right that I mentor a younger person with the same wisdom that was given to me."

Lamar also shared some of that wisdom with Obama during his visit. "I look where I'm at today and realize that most of my success is owed to the mentors that was in my life," Lamar says. "I sat down with President Barack Obama and shared the same views: topics concerning the inner cities, the problem, the solutions and furthermore embracing the youth, both being aware that mentoring saves lives."

The PSA is also affiliated with My Brother's Keeper, an initiative Obama launched in February 2014 that's designed to "help more young men of color facing especially tough odds to stay on track and reach their full potential," as Obama said in the program's launch address. During that speech he shared his own experiences growing up without a strong mentor in his own house.

"I didn't have a dad in the house," he shared. "And I was angry about it, even though I didn't necessarily realize it at the time. I made bad choices. I got high without always thinking about the harm that it could do. I didn't always take school as seriously as I should have. I made excuses. Sometimes I sold myself short."

Finding good mentors made the difference in helping Obama get himself on track for success, he said. On that point, Obama and Lamar see eye to eye. "Sometimes I reflect and think back, 'Where would I be if I didn't have a presence of an older acquaintance telling me what's right and what's wrong," Lamar says in his PSA, "telling me the pros and cons of every move I was about to make, telling me the best way to plan success for my future?'"

Without his mentor, Lamar may never have developed the focus and drive necessary to launch the brilliant career that's still only its adolescence.

Watch the full "Pay It Forward" PSA below.