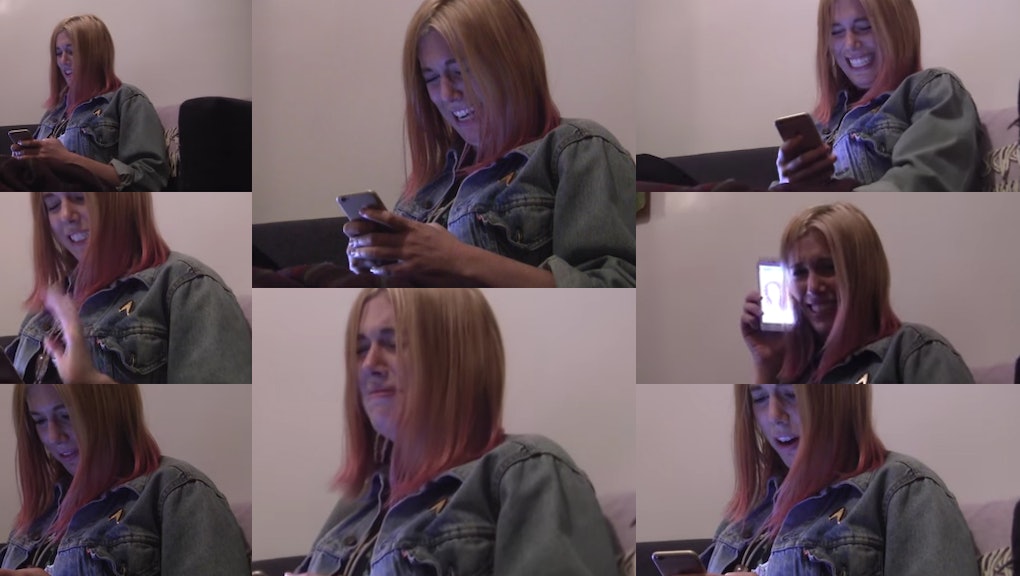 When 27-year-old writer Marian Bull happened upon the Facebook profile of her high school crush's new girlfriend, she came to a stunning realization. The girl was pretty. Like, really pretty.

She had an arsenal of professional head shots. She seemed to dabble in watercolor painting, but the results looked mediocre. And her skin was "made of silk that has little sun rays woven into it," as Bull put it.

"I'm sure she's a really nice person," Bull said, through a fit of uncontrollable laughter that seemed capable of morphing into tears at any moment. Her reaction was so extreme that a nearby witness — Bull's roommate — captured it all on video.

The footage of Bull's stalking session seems to have resonated with quite a few people, having gained tens of thousands of views and garnered coverage from various media outlets. The appeal of the video is obvious: To quote BuzzFeed, Bull (who has written for Mic before) is all of us.

There's something about the urge to see how you stack up against whoever your old ex (or in this case, crush) wound up with — even if we've otherwise totally moved on.

Bull herself told Mic that despite having once been super hypnotized by this dude's charm and hotness, she was a little surprised by herself when she reacted so strongly to the news of him having a hot new girlfriend.

The most immediately relatable element of the video is the honest way Bull runs down the list of ways in which her mind momentarily perceives her old crush's new girlfriend to be superior to her.

It takes seconds of noticing something as seemingly minor as good lighting in a handful of default pics for Bull to launch into a lament of how her heat is broken and how this girl's heat would never be broken. If she could score the unattainable guy from high school, how could she be so common as to deal with household repairs?

You can't blame the woman for reacting in such an extreme fashion. Seeing the kind of partner that someone you once loved (or at least, like, really wanted to have sex with) chooses instead of you is a blow to the ego. And if that person has silky hair and a watercolor-painting career, it can be an even bigger blow. Plus, seeing your crush or ex wind up with someone drastically different than yourself can call his or her taste into question entirely. All this time he was looking for that kind of person?

Alana Massey wrote candidly about this mindfuck in an essay for BuzzFeed last year.

"In addition to long blonde hair, she had earnest gratitude posts featuring all the super-boring emoticons," she wrote of discovering the online presence of a woman she had been left for. "She posted photos of sunsets and filtered her selfies to hell and back with Instagram ... A quick Google search brought up a photo of her cheerfully giving what appears to be a presentation about industrial label makers. In sharp contrast to my online life, a collection of mostly dryly despairing essays for online magazines and unfiltered Twitter jokes."

Bull is amused by the response to her silly video, though she finds herself a little troubled by those who have reached out to express their support by saying things like "I'm sure you're so much better than she is," or "he made a big mistake."

Those reactions, she said, are beside the point.

"Sure, it's always disappointing when a hot guy has a hot girlfriend, but there's no part of me that needs to feel superior to this complete stranger who I'm sure is perfectly lovely," she told Mic. "It feels weird to me that telling someone they're better than someone else, particularly with no evidence to support that claim, is a go-to expression of support."

Of course, it's likely that the video's fans are merely projecting their own experiences onto the clip, using the heightened emotional tenor of her giggling soliloquy as a way to come to terms with their own long-lost crush or ex who ultimately chose someone else.

But who could blame them? We've all looked up that crush's girlfriend or ex's new boyfriend on Facebook at one time or another, and we've all secretly hoped they'd be hideous. Even if the better part of your brain doesn't really care, even if you've realized some bigger dreams of yours and even if you genuinely don't care about that person at all, seeing the evidence that someone you once wanted picked someone who isn't you can elicit a strong emotional response.

Just cross your fingers that that person isn't a model. (For the record, Bull says she's actually an actress. Same diff, though.)