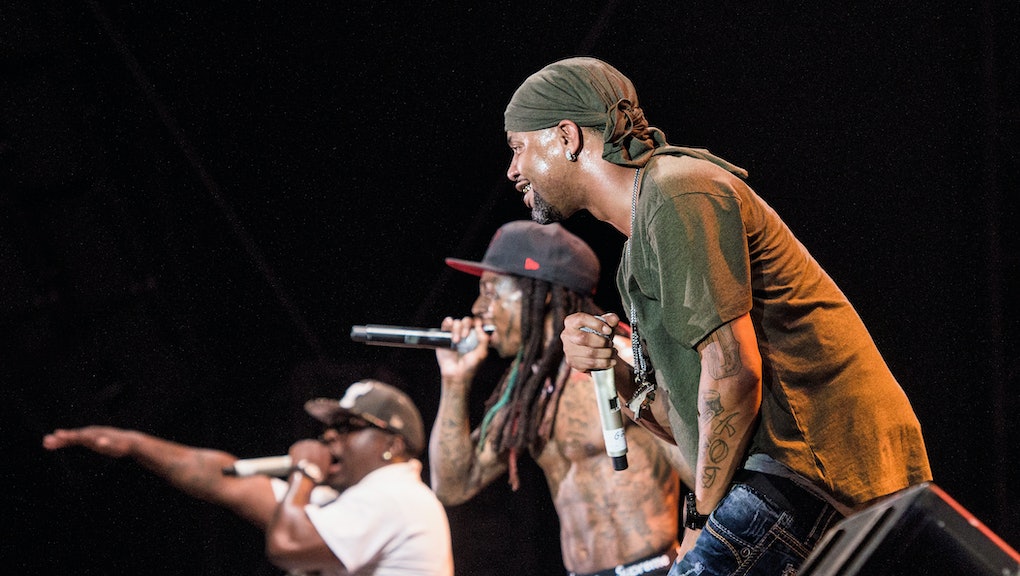 Juvenile, Lil Wayne and Mannie Fresh Are Making New Music Together — Here's What We Know

An all-star hip hop reunion is underway. The Hot Boys, comprised of Lil Wayne, Juvenile, B.G. and Turk and producer Mannie Fresh, who made songs like 1999's "That Block Is Hot" and "I Need A Hot Girl," will collaborate on a new musical project in the near future, according to an All HipHop interview with Juvenile and Fresh. Fresh, Wayne and Juvenile told All HipHop they will be reconnecting for the new album, which has already been started.

"The fans demanded this, to them it's iconic," Fresh said. "It's necessary that y'all come back and do this album, and even show the planet that whatever was going on with us we can get over that."

The Hot Boys already celebrated the good old times while performing at the Lil Weezyana Fest in New Orleans on Aug. 28, which commemorated the 10th anniversary of Hurricane Katrina, according to BET. Drake and Master P also showed up at the sold-out event.

B.G. is currently serving 14 years in jail for possession of a firearm and conspiring to obstruct justice, MTV reported.

The group, who worked under the Cash Money record label, released three albums, the last being 2003's Let 'Em Burn, according to Rolling Stone. As of September 2015, the Hot Boys had sold over 78 million albums together, NPR reported.

The group slowly disbanded in the early 2000s in pursuit of solo efforts. Wayne released his Tha Carter series —  one of which earned him a Grammy — and Juvenile worked on his own 400 Degreez, XXL reported. But the rappers still appeared on each other's works. In 2009 for instance, Wayne and Juvenile were both featured on B.G.'s "Ya Heard Me," Rolling Stone reported.

Lil Wayne will have a busy year if the collaboration comes through. His upcoming The Dedication Tour is set for 19 cities and kicks off Jan. 21 in Texas. The other Cash Money rappers are not on the guest appearance list, but Rae Sremmurd and Khalif "Swae Lee" Brown are.

The All HipHop interview Wayne, Juvenile and Mannie Fresh is below: