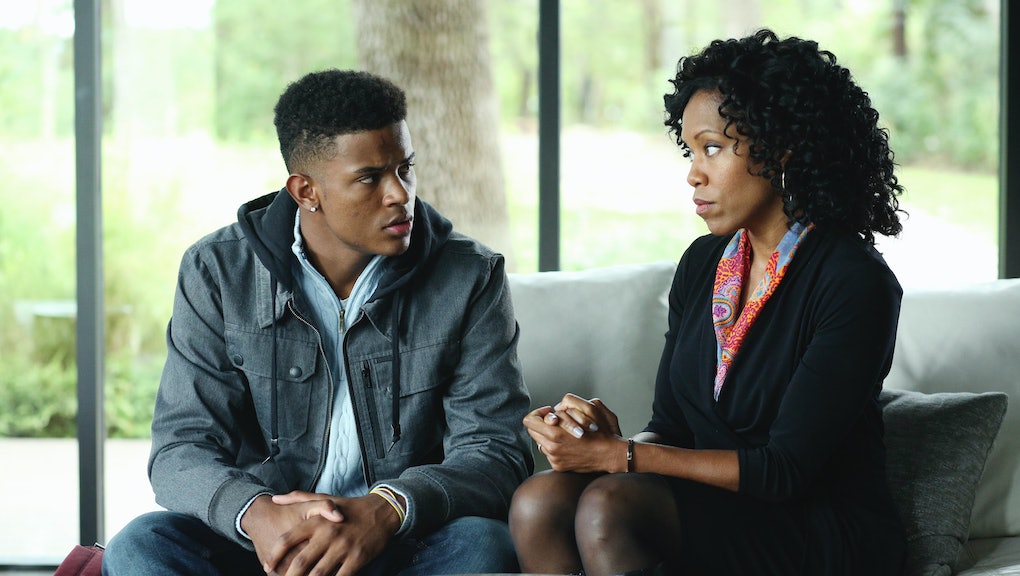 Six words open the season two premiere of American Crime: "I want to report a rape." The speaker is a clearly agitated woman, though the black screen refuses to offer any context or visual corroboration of who was making the 911 call. It's a short flash-forward, but as the episode unfolds, it becomes clear that creator John Ridley's ABC anthology series is tackling sexual assault in season two. Intriguingly, it's doing so by focusing on a complex and underrepresented story: that of the male rape victim.

The woman on the phone, as we learn by episode's end, is Anne Blaine (Lili Taylor), the mother of alleged victim Taylor (Connor Jessup). After hearing of her son's school suspension — prompted by NSFW photos of him circulating on social media — she'd finally gotten him to admit that "something" had happened at a party days prior. "I think someone did something to me," he tells her hesitantly. After failing to get support from the school, she calls 911, putting the show's arc into motion.

American Crime is breaching new ground not just by its choice of victim and crime, but by constructing a 10-episode storyline that underscores how issues of privilege, gender norms and homophobia are imbricated into everything. They're enmeshed in locker room antics, online bullying, school board meetings and family dinner table conversations.

This is not the first time a network television show has dealt openly with male rape victims. Law and Order: Special Victims Unit, the stalwart show for this type of storyline, has aired various episodes focusing on this very subject. A poignantly timely one in 2011 called "Personal Fouls" mirrored the Jerry Sandusky scandal that would rock Pennsylvania State University that same year. For that broadcast, the cast of the NBC show also taped a PSA that made resources available for viewers to find information, support and ways to get involved in efforts to end such instances of sexual abuse.

The Mariska Hargitay-led series also tackled the ubiquitous — if increasingly tone-deaf — question of whether men could be raped in last year's "Parole Violations" episode.

One in six men "have experienced abusive sexual experiences before age 18," according to the such-named organization 1-in-6. Even that statistic doesn't tell the full story, according to the group — that stat is from 2005, and even now these cases are underreported.

As Tom McCarthy's Spotlight reveals, the level of shame associated with male victims of sexual abuse can sometimes make tabulating these numbers that much harder. The film is focused on the Boston Globe investigations into accusations of a decades-spanning Catholic Church cover-ups regarding priests suspected of molesting boys in the Massachusetts capital. Much of the human drama of the film relies on the difficulty in getting the male victims, who continue to struggle with their childhood trauma, to speak openly about their experiences. They've been so imprinted with shame and guilt that even speaking to reporters is a great struggle.

But more often than not, male rape has been depicted on screen within two recognizable templates: as a punchline and as brutal punishment. The former abounds in comedies (think Seinfeld's "The Jimmy," It's Always Sunny in Philadelphia's "The Nightman Cometh," any number of Family Guy throwaway gags) while the latter featured in HBO's prison drama Oz and more recently in Starz's Outlander. In fact, that historical time-travel period drama has earned well-deserved praise for making the after-effects of a torturous rape scenario a central focus of its storyline.

While shows like Game of Thrones continue to use sexual assault as a titillating addition to their gore and violence, Outlander and now American Crime seem more interested in the fallout of such attacks — and, in a Law and Order vein, the legal ramifications of such accusations.

Even as the "something" that happened to Taylor begins to come into focus, the show's strength lies in not tying any didacticism from his specific experience but rather in seeing it as bringing together larger questions. Many of those questions are expressed in the slam poetry session that opens the show's fourth episode:

That feeling comes from the legal language government and law enforcement agencies have been using to talk about "rape." Recently, for example, a key linguistic change in the FBI's definition of forcible rape for data collecting purposes shows us how the gendered way we think of this crime is changing. From "the carnal knowledge of a female forcibly and against her will," the FBI has revised its definition, doing away with any mention of gender, Slate reported. This also has helped expand the purview of male victims who, in the cultural imagination, are usually still children and not young adults, as they are in American Crime.

What sets American Crime apart may very well be the complexity with which it is surrounding its storyline. What at first appears to be a straightforward case of a criminal investigation slowly reveals itself to be a part of a larger discussion the show is raising about the toxicity of masculinity. While the show is hinging on the rhetorical and cultural implications and definitions of rape, it is using Taylor's predicament — even his inability to articulate what happened — to openly discuss consent, sexual orientation and the stigma surrounding male-on-male sexual violence, all within a school sports environment.

At the center of American Crime is a basketball team whose past victories make them near inviolate within a private institution that relies on them to bolster fundraising and their winning image. It's only a further complication introduced by Ridley into a narrative that underscores the way class, race, privilege and changing sexual mores continue to demand further scrutiny in what we teach young men about sex. Ridley's visual style favors tight close-ups — images that make us constantly aware of the competing impulses behind his characters.

This is particularly striking in a scene in the second episode, in which Taylor is subjected to a rape kit exam at a local hospital. The nurse in charge is heard off screen explaining the process, while the camera remains on Taylor. He's bewildered by the prospect of so much bureaucracy. His flitting eyes show him anticipating the pain of recollecting the night when "something" happened. It's also a powerful moment because it visualizes the type of scene that is usually left off-screen. The camera itself eventually shows us the cotton swabs with which Taylor's anal area will be probed. The nurse's explanation fades away, while Taylor's heavy breathing takes over.

This moment of clinical vulnerability shuttles Taylor back to that night — in fact, the brief flashback of an intoxicated Taylor offers us the first glimpse of what may have happened at the party. It's these memories and the attempts by the nursing staff, the police and even his mother that keep driving Taylor crazy. A few episodes later, he yells, "I'm sorry I ever opened my mouth."

This unflinching look at the intricacies of what follow the 911 call that opens the show signals that American Crime is committed to moving beyond merely depicting a male rape victim. Instead, the show is carefully deploying this storyline to force characters and viewers alike to face our misconceptions about sexual assaults. It's telling that the show doesn't bill itself as a whodunnit — by episode four, audiences will have a good idea of who all was involved. It's what happened that matters.

This is not a show about pointing fingers or naming names, as if that's all it took to "solve" the issue at hand. As it showed last season, American Crime is more ambitious than that. It is shining a light on the systemic and institutionalized forces that let Taylor's story happen, but that also stay in place long after his own particular and increasingly complicated storyline is wrapped up.