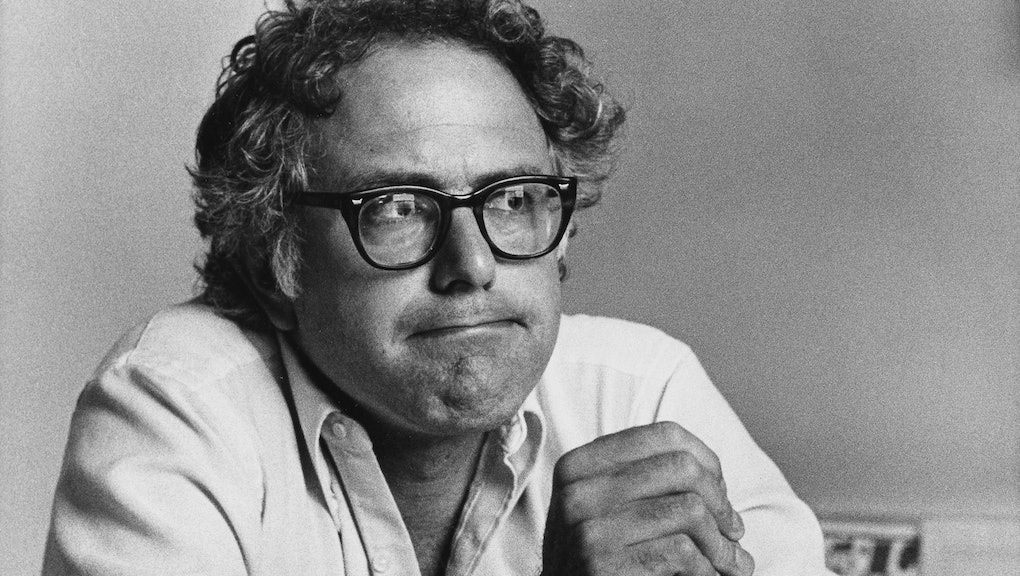 Even now, as he's competitively vying for the Democratic nomination in the 2016 presidential election, Vermont Sen. Bernie Sanders is an inherent underdog. It's not meant to be disparaging, and it's not meant to undermine his success. Rather, what Sanders has accomplished thus far is a testament to his career-long political ambitions, from going door-to-door in Burlington, Vermont, as the city's mayor to listening to residents complaints, to his passionate speeches on present-day, widespread income inequality.

Sanders and the civil rights movement: Unlike the typical narrative of a politician, whose spiel could include how they've always considered themselves a leader, or always wanted to go into politics, Sanders' political path was produced by somewhat fortunate circumstances. He initially enrolled in Brooklyn College in Brooklyn, New York, where he grew up — but he wasn't anywhere close to an active campus presence; the closest he came was discussing Supreme Court cases with his then-roommate, Steve Slavin, according to the New York Times.

Sanders then transferred to the University of Chicago. There, he learned firsthand about racial inequality in America. In a profile of Sanders from sometime after 1985 — which was not published at the time, but was later obtained by the Atlantic in October — Sanders details his encounter with police after he distributed posters of a black woman's arm being painfully twisted back by an officer.

"The cop car pulls up to me, and they get out and accost me," Sanders said. "Needless to say, I'm terrified. One of the cops puts his finger in my face and says, 'It's outside agitators like you who're screwing this city up. The races got along fine before you people came here!' Like this is Alabama or someplace. Anyhow, I was late for my class, a political science class, and I remember the teacher was talking about local government, and when I walked in and sat down, I saw right then and there the difference between real life and the official version of life. And I knew I believed in one and didn't believe any more in the other."

After graduation, however, it was an escape to the mostly rural state of Vermont in the 1960s that he was able to begin a path with socialism.

A rural escape: Sanders' initial move to Vermont began with what was, to put it nicely, a humble abode. He lived the first few years near Montpelier, on what was a "maple sugar shack with a dirt floor," according to Politico. The converted house, sadly, didn't even have proper electricity or plumbing, but that didn't bother Sanders at all.

"It was just fantastic," Sanders said in the Atlantic interview. "I mean, I grew up in a three-and-a-half-room apartment, never owned a damned thing, and owning a piece of land I could walk on was just incredible! This brook is my brook! This tree is my tree!"

When he moved to Burlington, Sanders became involved with the Liberty Union, a socialist party that stemmed from anti-Vietnam war protests — something he opposed during his time in Chicago, according to ABC News. With the union, he ran in four straight U.S. Senate and gubernatorial elections. In a socialist party, however, he never won more than 6% of votes in any race, according to the Guardian. While he wasn't successful in any of these runs for office, it showed Sanders that he could be an effective public speaker.

Most importantly, he learned more about the people in his nearly 40,000 strong city. That kind of intimacy helped to create an unprecedented run for city major.

Sanders the mayor: Facing off against Democrat Gordon Paquette, who was the incumbent mayor for a decade, Sanders was a clear underdog. After all, third-party candidates rarely do anything aside from snagging a few votes. But Paquette wasn't winning any favors with the low-income families of Burlington. According to the Daily Dot, under Paquette, the city's housing prices increased, and he implemented high-cost urban-development plans.

In a small city where every vote counts, Sanders made it a point to actively involve himself with the citizens — a tactic where Paquette was late on the draw. In this particular race, it came down to only 10 votes, but Sanders emerged victorious, and was the only mayor in the United States that was neither a Republican nor Democrat.

"It was like [Marxist Leon] Trotsky had been elected mayor," Sanders' friend, Richard Sugarman, told the Guardian. "But it wasn't Trotsky. It was Bernie."

Even after winning, Sanders didn't forget what got him there. According to the Atlantic profile, he still consistently visited Burlington's citizens door to door, and made sure there weren't any complaints, and if so, how he'd be able to fix it. That personable, approachable tactic served Sanders well in his eight years as mayor. But as he would find out in his long congressional career, Capitol Hill was a different beast altogether.

The 2010 filibuster: Sanders' time with the House of Representatives and the Senate was mostly under the radar in mainstream politics and the media. As he said in a 2007 interview with the New York Times, it was a "completely different animal." It didn't matter, though. He still worked his butt off.

"He has no hobbies," Vermont Sen. Patrick Leahy's former chief of staff, Luke Albee, told the Times. "He works. He doesn't take time off. Bernie doesn't even eat lunch. The idea of building a fire and reading a book and going on vacation, that's not something he does."

In fact, it wasn't until 2010 that Sanders received an extended stay in the national media spotlight, in an 8-and-a-half-hour filibuster on President Barack Obama's bill that extended the Bush-era tax cuts with GOP leaders.

The filibuster, according to the Washington Post, was the longest since 2003. "I'm not here to set any great records or to make a spectacle," Sanders said, according to the Post. "I am simply here today to take as long as I can to explain to the American people the fact that we have got to do a lot better than this agreement provides."

While the tax-cuts did pass, the filibuster did not go unnoticed. Furthermore, as the Guardian noted, the marathon filibuster made Sanders a "hero on the left" and added that it would probably create "Bernie for president talk." After all, attacking income inequality — particularly tax cuts for wealthy citizens — would become a staple in his 2016 campaign rhetoric.

The Bern begins: Though he only had 3% support among Democratic voters, according to a CNN/ORC poll from March, Sanders announced his candidacy in the Democratic Party the following month. Even with the low numbers, Sanders noted that people "should be a little bit careful underestimating me," according to the New York Times.

"Now is the time for millions of working families to come together, to revitalize American democracy, to end the collapse of the American middle class and to make certain that our children and grandchildren are able to enjoy a quality of life that brings them health, prosperity, security and joy — and that once again makes the United States the leader in the world in the fight for economic and social justice, for environmental sanity and for a world of peace," Sanders said in his campaign kickoff speech in May in Burlington.

It didn't take long after for America to "feel the Bern." As CNN noted, Sanders' rise can be partly attributed to Democratic frontrunner Hillary Clinton's email scandal, which had left her with an unfavorable opinion among voters. The poll numbers have consistently demonstrated just that, and with no other primary competition in the Democratic race — especially with Vice President Joe Biden electing not to run — Clinton's camp understands that the "Bern" is here to stay.

Sanders has achieved this while simultaneously pitching his ideas of self-described Democratic socialism to larger masses, as he continues to gain support for the much-maligned ideology.

"It builds on what Franklin Delano Roosevelt said when he fought for guaranteed economic rights for all Americans," Sanders told a group of students at Georgetown University in November, according to the Atlantic. "Democratic socialism means that we must create an economy that works for all, not just the very wealthy."

In the long run, Sanders' chances to win the Democratic bid, and potentially the 2016 election, will likely hinge on America's acceptance of a candidate who is, ultimately, considers himself a socialist. However, if his extensive history in politics and activism — of fighting against the odds — is any indication, it's clear: Clinton and the GOP field have a tangible, impassioned rival.