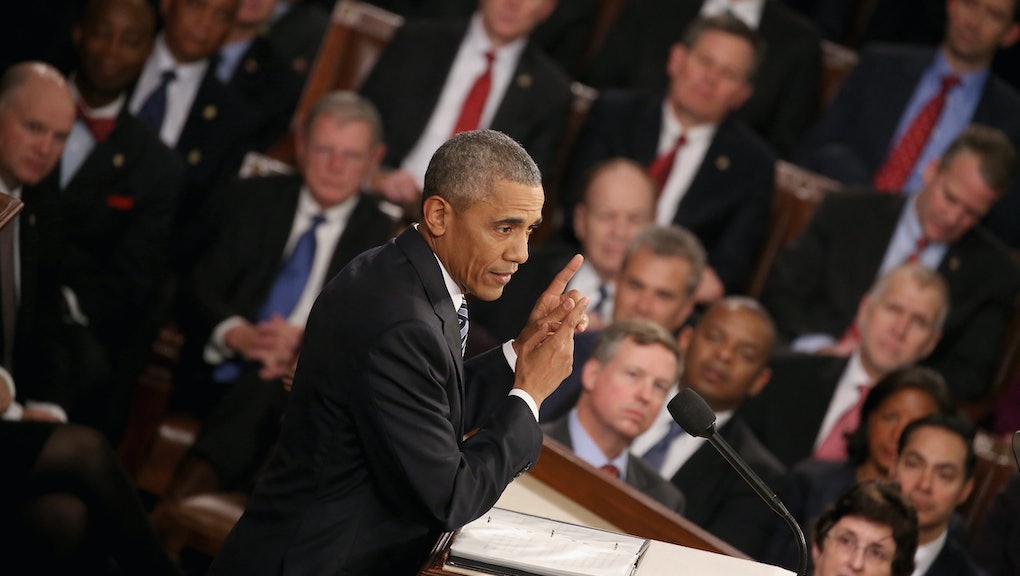 President Barack Obama used his last State of the Union address not only to play up his own legacy, but to scold anyone capitalizing on the rhetoric of hate.

"We need to reject any politics that targets people because of race or religion," Obama said. "This is not a matter of political correctness. This is a matter of understanding just what it is that makes us strong. The world respects us not just for our arsenal; it respects us for our diversity, and our openness, and the way we respect every faith."

"His Holiness, Pope Francis, told this body from the very spot I stand tonight that 'to imitate the hatred and violence of tyrants and murderers is the best way to take their place,'" he said, as a hush went through the crowd. "When politicians insult Muslims, when a mosque is vandalized, or a kid bullied, that doesn't make us safer."

Obama's remarks came the same day he openly scoffed at Republican presidential frontrunner Donald Trump during a Today show appearance, calling out the real-estate mogul for investing in the timeworn tactic of rallying support through fear.

"That's not telling it like it is," he said in the State of the Union. "It's just wrong. It diminishes us in the eyes of the world. It makes it harder to achieve our goals. And it betrays who we are as a country."

Trump, who has no qualms about deriding Obama's policies, foreign and domestic, pre-empted Obama's address in a column published in USA Today. Trump said people are indeed frustrated — and contradicted the president's claim that the state of the union is strong.

"They are tired of being lied to, and they are tired of seeing their country diminished — not by outsiders and foreigners — but by their very own political leaders," Trump wrote. "If the leadership of the country cannot take pride in the nation, how is it expected that others will recognize and embrace American exceptionalism? When the American people find someone who speaks their language and who they think can deliver on his word, they are going to flock to him, regardless of their political alignment."

Balance of Power: Obama tempered a full-throated defense of his legacy with some self-deprecation about the nation's political divides and his success in healing those rifts.

"It's one of the few regrets of my presidency – that the rancor and suspicion between the parties has gotten worse instead of better," he said. "There's no doubt a president with the gifts of Lincoln or Roosevelt might have better bridged the divide, and I guarantee I'll keep trying to be better so long as I hold this office."

But Obama, in his farewell State of the Union, specifically urged the nation to be mindful of frustration that might give rise to "voices urging us to fall back into tribes, to scapegoat fellow citizens who don't look like us, or pray like us, or vote like we do, or share the same background."