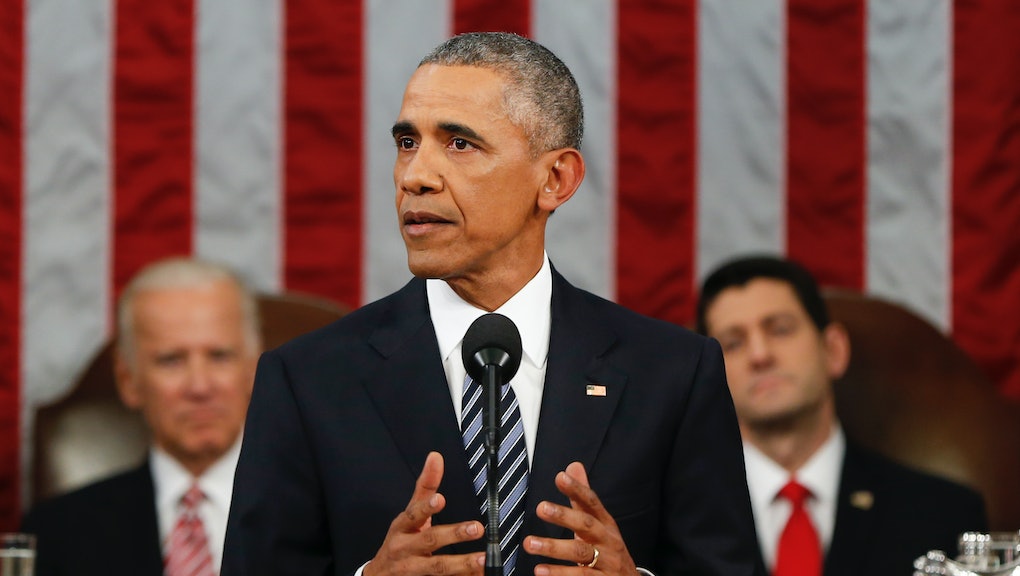 On Tuesday night, President Barack Obama delivered the final State of the Union address of his presidency. At 5,700 words, it was his shortest State of the Union, but it was also intended to take a longer view than any of his previous speeches. One of the crucial threads of his hope for the future of America was summed up by one question he posed early in his speech: "How do we keep America safe and lead the world without becoming its policeman?"

Obama spent a significant chunk of his address attempting to answer his own question. For him, the answer lies in taking terrorism seriously but not deeming it an existential threat, repudiating the temptation in nation-building, and using the tools of diplomacy and trade agreements to mend old tensions and build strategic relationships.

The speech: The president vigorously defended his strategy on dealing with the terrorist group Islamic State, also known as ISIS or ISIL.

"For more than a year, America has led a coalition of more than 60 countries to cut off ISIL's financing, disrupt their plots, stop the flow of terrorist fighters and stamp out their vicious ideology," Obama said in his prepared remarks. "With nearly 10,000 air strikes, we are taking out their leadership, their oil, their training camps, and their weapons, we are training, arming and supporting forces who are steadily reclaiming territory in Iraq and Syria."

Obama cautioned against claims that ISIS poses an existential threat to the nation, a sentiment he described as only endowing them with more power than they actually possess.

"But as we focus on destroying ISIL, over-the-top claims that this is World War III just play into their hands," Obama said. "Masses of fighters on the back of pickup trucks and twisted souls plotting in apartments or garages pose an enormous danger to civilians and must be stopped — but they do not threaten our national existence."

He went on to warn that a hardline military response motivated by ego could end up damaging the very relationships required to defeat ISIS.

"We don't need to build them up to show that we're serious, nor do we need to push away vital allies in this fight by echoing the lie that ISIL is representative of one of the world's largest religions," Obama said.

The world today is one of American preeminence, Obama argued, and for that reason it needs to be wise about how it invests its resources to deal with emerging threats. "In today's world, we're threatened less by evil empires and more by failing states," Obama said.

Bigger than ISIS: But vigilance against the countless sources of peril from poor, volatile nations shouldn't lead to intervention, Obama said.

"We also can't try to take over and rebuild every country that falls into crisis. That's not leadership; that's a recipe for quagmire, spilling American blood and treasure that ultimately weakens us," Obama said. "It's the lesson of Vietnam, of Iraq — and we should have learned it by now."

Obama went on to list some of his key diplomatic accomplishments — thawing relations with Cuba, forging a nuclear deal with Iran. He also encouraged Congress to approve his administration's long sought-after Trans-Pacific Partnership agreement, a free trade accord that has been fiercely criticized by progressive environmentalists and organized labor, as a way to temper China's power in the Pacific Rim.

"With TPP, China doesn't set the rules in that region, we do. You want to show our strength in this century?  Approve this agreement," Obama said.

Obama explained that his hope for the future was a mode of leadership that defied the crude binary of isolationism and imperial interventionism.

"American leadership in the 21st century is not a choice between ignoring the rest of the world – except when we kill terrorists; or occupying and rebuilding whatever society is unraveling," Obama said. "Leadership means a wise application of military power, and rallying the world behind causes that are right."

That final line is reminiscent of a view that Obama's been criticized for many times before — "don't do stupid shit." It's a classic articulation of the Obama ethos — a worldview that eschews explicit avowal of ideology and tends to seek a middle ground between the poles of popular debate. It's a defense of ad hoc policy-making, playing foreign policy by ear. For many progressives, that way of doing business has meant disappointment with Obama's sluggishness in ending hawkish policies initiated by the Bush administration. But it's also been better than the ideological status quo that prevailed before his entry into office — the idea that the world should be molded in America's image.