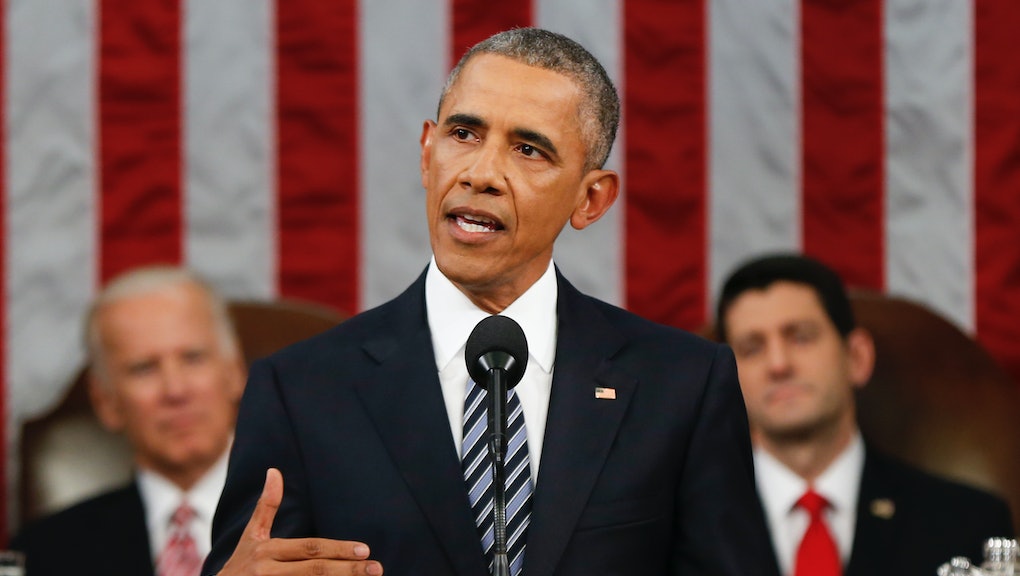 On Tuesday, President Barack Obama delivered his seventh and last State of the Union. The over 5,400-word speech looked back at his time in office and ahead to the future issues America will likely face after he leaves office. Obama touched on four main topics: the economy, climate change, national and global security without America being the world's policeman, and the shifting political landscape. Without naming any of the presidential hopefuls of 2016, his speech was short, sweet and — in true Obama fashion — hopeful.

"The future we want — opportunity and security for our families; a rising standard of living and a sustainable, peaceful planet for our kids — all that is within our reach," Obama said. "But it will only happen if we work together. It will only happen if we can have rational, constructive debates." In order to "fix our politics," Obama then urged audiences to vote.

This SOTU was also arguably the most accessible ever. Audiences were able to patrol the address via multiple platforms, including YouTube, the White House's website and even Snapchat.

That means there was no shortage of reactions to all the happenings at SOTU — including, but not limited to, Obama himself. Below are the top things people are talking about from the 2016 SOTU:

1. The Republican response to the State of the Union by South Carolina Gov. Nikki Haley

Haley responded to Obama's SOTU by warning Americans against the temptation of "the angriest voices," supposedly an allusion to GOP candidate Donald Trump, whose often outlandish remarks about immigrants and Muslims have been met with no shortage of backlash, NBC reported. "No one who is willing to work hard, abide by our laws and love our traditions should ever feel unwelcome in this country," she said, according to NBC.

Her comment came in the middle of a heated debate sparked about Muslims and immigration, a debate largely fueled by Trump.

Republicans' responses to Haley were mixed:

2. Ann Coulter's own response to Haley

Among the harshest responses was one by Trump supporter Ann Coulter, who, during her live tweeting of Haley's response, declared that "Trump should deport Nikki Haley." Haley was born to Indian immigrants, the New York Daily News reported.

Then Coulter voiced a not-so-sensitive comment about Muslim immigrants from Haley's immigration-friendly speech.

A surprising guest at the invite-only SOTU was Kim Davis, who is known for being jailed last year over refusing to issue marriage certificates to same-sex couples, which the Supreme Court ruled in favor of in June. Ohio Congressman Jim Jordan's team had allegedly given her a ticket without his knowledge. Davis said she wanted to attend SOTU as an "encouragement" to "all Christians," CNN reported.

At sight of her, Twitter went straight for the kill:

5. Bernie Sanders' face and his mysterious yellow piece of paper

One of the key topics of discussion for Obama was the worrisome American economy, which he said needs change, and called out Wall Street and "outdated regulations."

Then viewers caught the face of Democrat Vermont Sen. Bernie Sanders, who often goes against the big-bank grain.

Later in the speech, Sanders is seen pulling out a yellow piece of paper from his jacket. The internet exploded with all of the (mostly non-political) possibilities:

The GOP candidate tweeted out that that Obama's SOTU was "really boring, slow, lethargic — very hard to watch!"

Obama made multiple indirect jabs at Trump for his anti-Muslim opinions, including, "When politicians insult Muslims ... that doesn't make us safer."