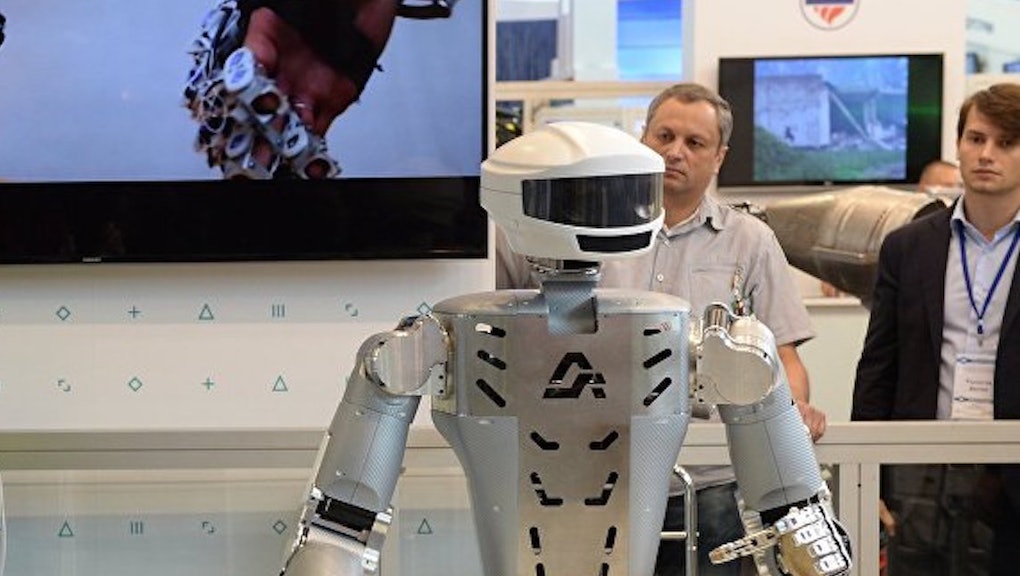 The Russians Won't Send Another Russian to Space. They'll Send This Thing.

Russian scientists are working on a humanoid robot that will replace cosmonauts on dangerous missions.

The anthropomorphic bot is a collaboration between robotics lab Android Technics and TsNIIMash, a Russian institute for building machines, according to Sputnik International. Alexander Permyakov, Director-General of Android Technics, told the news agency that these robots will be able to "completely replace humans in circumstances that are potentially hazardous or harmful."

Android Technics robots will theoretically be able to explore a planet, set up generators, create research stations and build other necessary structures without a human nearby, Permyakov says. In effect, that means sending fewer cosmonauts into space, thereby cutting costs and potentially saving lives.

The U.S., Russia and China already use robots in space travel missions. NASA has geologist bots, the Mars Exploration Rovers, for collecting and analyzing rock and soil samples on the red planet. Similarly, China's Yutu rover, deployed in 2013, was designed to analyze the Moon's geological composition.

But sending humanoid robots, machines that look and act like us, to space is the new trend. Last year, China showed off a series of bots it plans to launch in 2020, including one that looks just like Iron Man.

Meanwhile, NASA has already sent a humanoid to space, the Robonaut 2. This second-generation bot was launched into space in 2011 and was chosen as the Government Invention of the Year in 2014.

Space can be an exceedingly dangerous place for humans. Scientists hope that by creating dexterously nimble robots, they will help cosmonauts stay safer in that great expanse beyond the Earth.