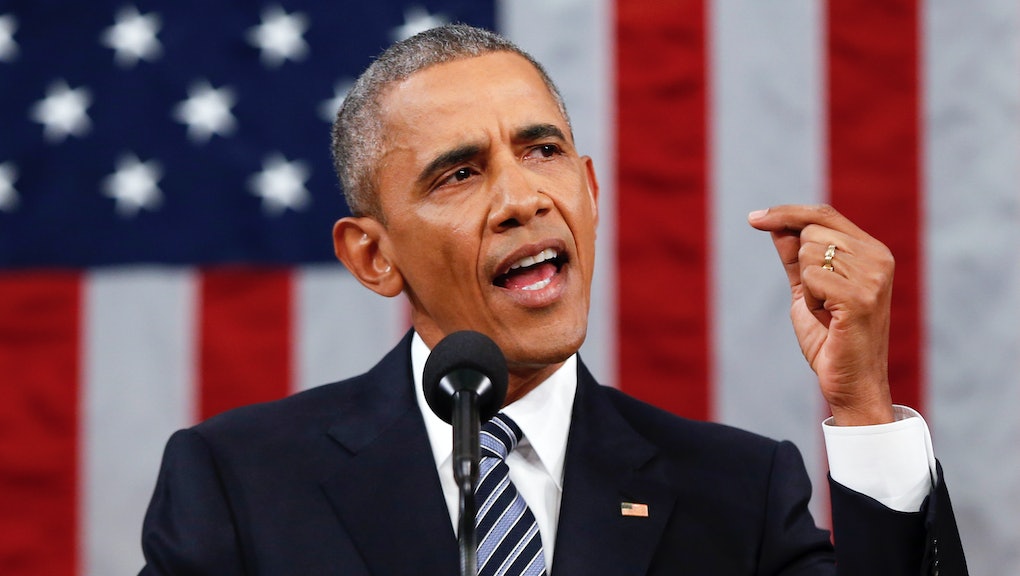 During his seventh and final State of the Union address on Tuesday, President Barack Obama gave a speech that didn't shy away from a number of heavy topics. Yet one comment from the president had Twitter up in arms, and offended users tweeted en masse about what they believed to be a big gaffe on Obama's part — namely, that the Middle East's problems date back thousands of years.

"As someone who begins every day with an intelligence briefing, I know this is a dangerous time," Obama said. "But that's not because of diminished American strength or some looming superpower. In today's world, we're threatened less by evil empires and more by failing states."

"The Middle East is going through a transformation that will play out for a generation, rooted in conflicts that date back millennia," Obama continued. The key word in question was "millennia," a timeline that was hotly debunked on Twitter in the hours after the presidential address.

The core problem with the representation of Middle Eastern history is, of course, that it's false. But beyond that, it "feeds two dangerous and mistaken beliefs" to frame relations in the region in such a light, Vox reported. In other words, it could perpetuate a mindset about the territory that could breed misunderstandings about its people and the Muslim religion, and perpetuate biases against the refugees fleeing the area in search of security.

That type of representation is in stark contrast to the core themes that permeated the rest of Obama's address. At one point, Obama sublty took aim at Republican presidential hopeful and GOP frontrunner Donald Trump, when he decried the candidate's position on Muslims, particularly his proposal to enact a ban on Muslim immigrants entering the U.S.

"When politicians insult Muslims, when a mosque is vandalized, or a kid bullied, that doesn't make us safer," Obama said. "That's not telling it like it is. It's just wrong. It diminishes us in the eyes of the world. It makes it harder to achieve our goals. And it betrays who we are as a country."

Yet despite the president's "millennia" mistake, many reacting on Twitter had positive thoughts about the message Obama was aiming to communicate to the American people and to the world. Among the topics he discussed were a dire need for political cooperation across party lines; the legacy and the future of the American government; terrorism and fear surrounding the threat of the Islamic State group, or ISIS; climate change; and international diplomacy, among other issues.

Meanwhile, despite Obama's call for increased understanding and cooperation across the political aisle, users reacting to the SOTU address were, perhaps unsurprisingly, starkly divided.

Despite the polarized response on Twitter, an instant poll from CBS News during the event showed that the vast majority of viewers approved of the remarks and proposals Obama made during his address — earning the president a 91% approval rating on his seventh SOTU speech.