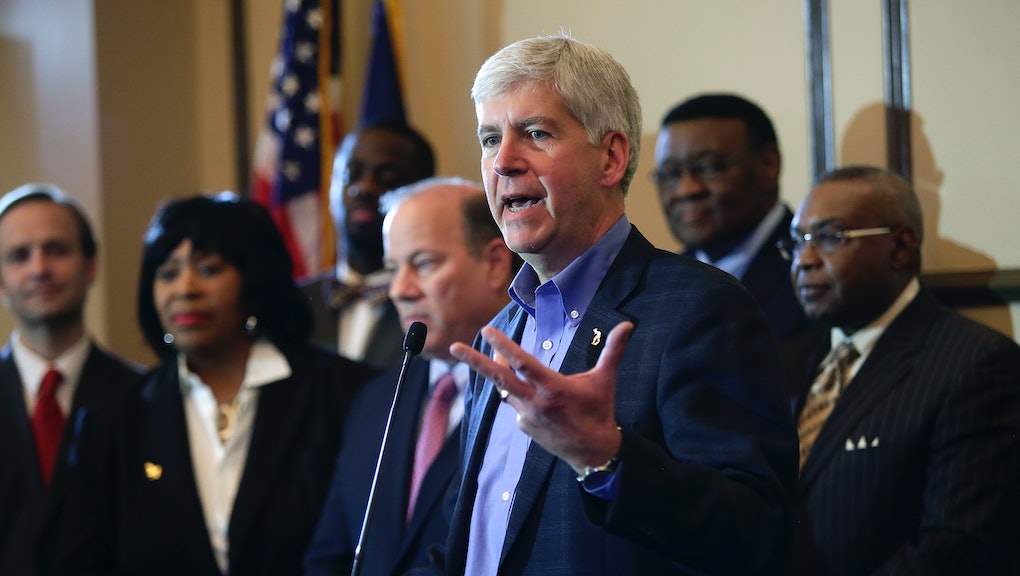 Here's How the Flint, Michigan, Water Crisis Has Escalated to a State of Emergency

Flint, Michigan, is in a state of emergency, and it's gotten so bad that Gov. Rick Snyder has called on the Michigan National Guard to deal with it, reports said Tuesday.

According to MLive, dangerous levels of lead in the city's drinking water have prompted the governor to order guardsmen to pass out bottled water and filters door-to-door. It's the first time the Michigan National Guard has been activated since 2012.

Why is there lead in Flint's drinking water? Put simply, the city planned to switch to a new water source — Lake Huron — in 2013 as a cost-cutting measure and to make the city more self-reliant instead of buying water from Detroit.

The switch would have funneled water from Huron into Flint via a yet-to-be-constructed pipeline. But when Detroit announced it would stop selling water to Flint three years earlier than expected, the city had to find a new source in the interim.

Enter the Flint River — which turned out to have water so corrosive it caused the lead pipes it was traveling through to deteriorate and release poison into the supply. Flint residents were tipped off when their faucets started oozing stinky brown liquid and they began to lose their hair and get skin rashes.

Then, after months spent insisting the water was "safe" and telling residents to just "boil" it to get rid of bacteria, local and state authorities admitted in January 2015 that they had a problem on their hands. Testing revealed Flint was in violation of the Safe Water Drinking Act due to high levels of trihalomethanes, or TTHM — chemicals used to disinfect water that also increase the risk of cancer and can cause liver, kidney and central nervous system damage in humans — and that infants and children were found to have higher levels of lead in their blood since switching to the Flint River source.

The city is now pumping $10 million into its emergency response — and fighting a lawsuit filed on behalf of some residents. On Oct. 8, Gov. Snyder announced yet another multimillion-dollar plan, this time to connect Flint's drinking supply back to Detroit's.

It's messy, yes, but perhaps no more so than all the other stuff that's been happening in Flint for much of the last 50 years. A city of about 100,000 with an economy built on the auto industry, Flint suffered a sharp decline in the 1960s when "white flight," deindustrialization and divestment sucked resources out of the city into the surrounding suburbs. Flint is 56% black by census count.

The city's population size is now half what it was in the 1960s, according to Fortune. Between 1978 and 2006, the local General Motors factory alone cut 72,000 jobs. Flint has declared two financial emergencies since 2002 and, in 2012, had the highest murder rate in the United States. Today, the situation is about as stark as it gets: According to recent census data, 41% of the population lives below the poverty line, more than double the national rate.

As with many cities across the nation, a direct line can be traced from white flight and deindustrialization in the mid-20th century to the erosion of resources, urban decay, crime spikes and environmental hazards that inevitably followed. It's no accident that the people caught footing the proverbial bill are often poor and black — though Flint has a significant poor white population as well — and that the effects linger for decades.

In the meantime, Oscar-winning documentary filmmaker and Flint native Michael Moore has called for Snyder to be arrested on corruption charges. The federal government launched an investigation into the matter in January.