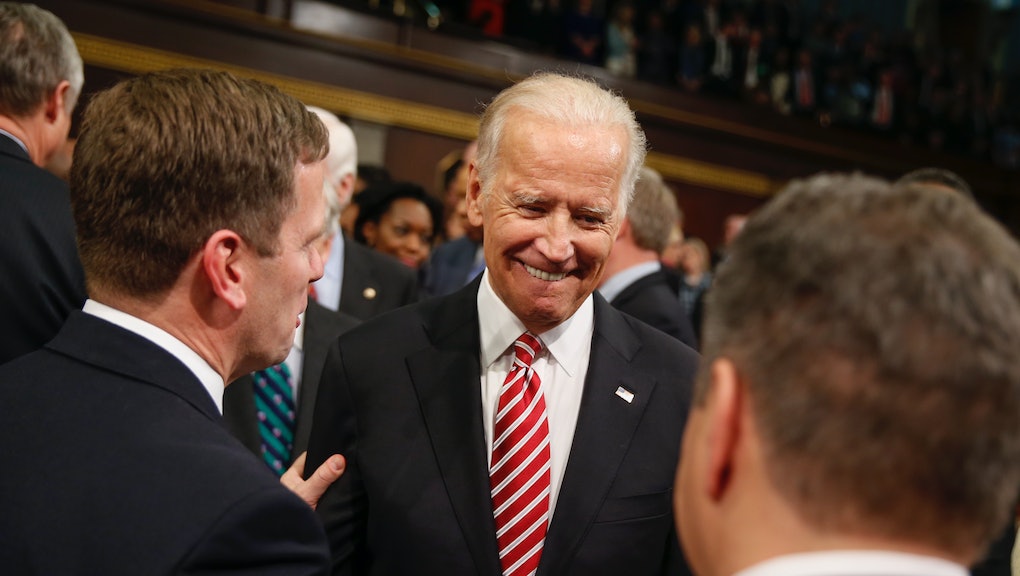 With the help of Vice President Joe Biden, the United States could become the first country to cure cancer for good — at least, that's the plan.

In his final State of the Union address on Tuesday night, President Barack Obama announced a "new national effort" to find a cure for cancer, and appointed Biden — a fervent advocate for cancer research — to lead the charge.

"Last year, Vice President Biden said that with a new moonshot, America can cure cancer," Obama said in his speech. "Last month, he worked with this Congress to give scientists at the National Institutes of Health the strongest resources they've had in over a decade."

"Tonight, I'm announcing a new national effort to get it done," he continued. "And because he's gone to the mat for all of us, on so many issues over the past 40 years, I'm putting Joe in charge of Mission Control. For the loved ones we've all lost, for the family we can still save, let's make America the country that cures cancer once and for all."

On his personal Medium page Tuesday night, Biden expressed his determination to find a cure for cancer — but also described the obstacles the country's healthcare system will have to overcome.

"Several cutting-edge areas of research and care — including cancer immunotherapy, genomics, and combination therapies — could be revolutionary," Biden wrote. "Innovations in data and technology offer the promise to speed research advances and improve care delivery."

"But the science, data and research results are trapped in silos, preventing faster progress and greater reach to patients," he continued. "It's not just about developing game-changing treatments — it's about delivering them to those who need them."

On Medium, Biden laid out a number of plans to address these issues. They include attempting to increase funding for cancer research and treatment, and facilitating better communication among researchers, physicians, patients and lawmakers.

And he's hitting the ground running. In the next two weeks he'll meet with a number of cancer experts — on Friday, at the Abramson Cancer Center at the University of Pennsylvania's Perelman School of Medicine, and at the World Economic Forum in Davos, Switzerland. Later in the month, he plans to kick off a series of government meetings to discuss ways to increase federal funding for cancer research and treatment.

"It's personal for me," Biden said. "But it's also personal for nearly every American, and millions of people around the world."

Biden also has a personal connection to cancer. His son, Beau Biden, died in May, from brain cancer, at the age of 46.

"It's personal for me," Biden wrote. "But it's also personal for nearly every American, and millions of people around the world. We all know someone who has had cancer or is fighting to beat it. They're our family, friends and co-workers."

But will it be enough?

If successful, Biden's so-called "moonshot" could completely transform the future of health. But some experts worry it won't be sufficient.

Georgia Hurst is the founder and director of I Have Lynch Syndrome, a nonprofit dedicated to raising awareness about the inherited condition that predisposes victims to a number of early-onset cancers. Hurst, who has Lynch Syndrome and who lost a brother at age 36 to colon cancer, is a strong supporter of Obama, but she said the notion of a "cure for cancer" might oversimplify a complex web of diseases.

Hurst, who lost a brother to colon cancer, is a strong supporter of Obama, but she said the notion of a "cure for cancer" might oversimplify a complex web of diseases.

"Cancer is not one disease, but many diseases," Hurst told Mic. "The reason we call them cancer is because they all share the same fundamental feature, which is the abnormal growth of cells." But "each of them is different," she said, "and that's why we haven't been able to find a cure."

Evan Sohn, vice president of the Sohn Conference Foundation, which supports the treatment and cure of pediatric cancer, was pleased with various aspects of Obama and Biden's plan — particularly the push for collaboration among cancer researchers and care providers. His organization has already taken steps in that direction, launching the Sohn Initiative for Collaborative Research — an alliance of New York hospitals that have agreed to share important research and samples among each another.

"It's always good to hear someone else toot the same horn, or play the same song you're singing," Sohn told Mic.

Like Hurst, Sohn acknowledges that finding a cure for cancer is a lofty goal.

"I think it's a very ambitious endeavor and I applaud [Obama's] efforts, but I think we really need to focus more on preventative measures," Hurst said. "I think we need to talk about what healthy living looks like."

"I think it's a great aspirational target, and it rallies everyone around a common cause," he said. "But there are tens of thousands of variables — probably millions of variables. It's a real significant challenge."

There's another problem with the promise of big-picture, long-term cancer-fighting initiatives: They could dissuade people from making easy, healthy lifestyle changes now — such as quitting smoking or getting more exercise. People who smoke are 15 to 30 times more likely to develop or die from lung cancer than those who don't, according to the Centers for Disease Control and Prevention. And physical activity has been linked to decreased risk of colon and breast cancer, according to cancer.gov.

"I think it's a very ambitious endeavor and I applaud [Obama's] efforts, but I think we really need to focus more on preventative measures," Hurst said. "I think we need to talk about what healthy living looks like."

"The American diet and lifestyle is the perfect prescription for the development of cancer," she said. "Until we address that, I think all we're doing is just putting a bandage on the problem."

Ultimately, a cause for hope

There are questions, too, about Biden's mission to secure more funding. More money to fight cancer sounds great — except that federal funding for cancer research has technically been decreasing over the past decade or so.

When adjusted for inflation, the National Institute of Health's budget was 23% lower in 2013 than it was in 2003, according to the American Society of Clinical Oncology. That means cancer patients have had less access to clinical trials; enrollment in the NIH's Clinical Trials Network was only 20,000 in 2013, compared to 29,000 in 2009, according to the ASCO.

A new injection of capital might just bring us back to where we were before, as opposed to spurring funding forward.

Obama and Biden might not reach their ultimate goal. That being said, the medical community still welcomes any small steps in the right direction. If in the end, all that's accomplished is that the NIH gets a little more money to fund exciting programs, and there's greater collaboration among research institutions, "that would be fantastic," Sohn said.

The U.S. government has been fighting cancer for for nearly half a century — ever since President Richard Nixon declared a war on cancer back in 1971.

"Unfortunately, we had neither the weapons nor the strategy to fight that war," Dr. Benjamin G. Neel, director of the Laura and Isaac Perlmutter Cancer Center at NYU Langone Medical Center, told Mic via email. "Fundamentally, we didn't really know what cancer was, and as a result, we were in no position to effectively combat it." Now, in 2016, "we know the enemy, and we have the strategy and the weapons to defeat it."

"What we need are the soldiers and the budget," Neel continued. And bipartisan support: "I and my colleagues hope that both sides of the aisle will take on the challenge that President Obama has thrown down."