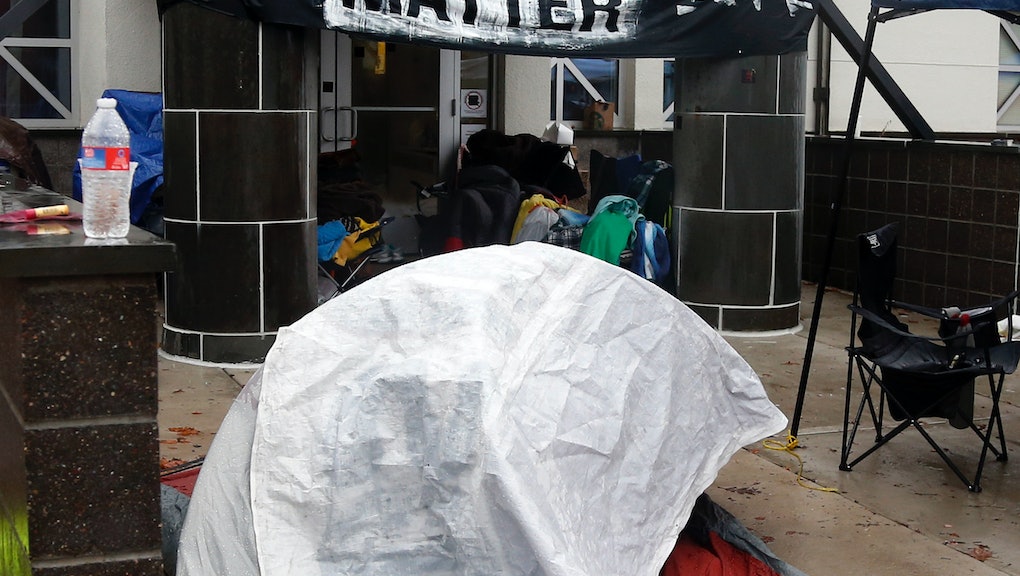 At this point it's become pretty clear why the phrase "all lives matter" is a problem. As one Reddit user explained, to replace "black lives matter" with "all lives matter," as a number of politicians have done, is to deny the institutional violence that black people disproportionately suffer.

Some people still aren't getting it.

Last month, Republican Missouri state Rep. Mike Moon introduced House Bill 1794, also known as the "All Lives Matter Act." But even a name that doesn't appropriate and trivialize the movement against police brutality couldn't have saved it: The bill hopes to legally establish that personhood begins at the moment of fertilization. Fertilized eggs, says the bill, are lives. And they matter.

Calling fertilized eggs people of course goes further than semantics. Granting embryos, zygotes and fetuses personhood status means allowing them the full protection of the U.S. Constitution, including the right to life. HB1794 has three main parts, which state, "The life of each human being begins at conception and is hereby deemed a person. As with all persons, unborn children have protectable interests in life, health and well-being. The natural parents of unborn children have protectable interests in the life, health and well-being of their unborn child."

Officially, the act would repeal Section 1.205.1 of an existing Missouri statute, which already insisted that life began at conception. The chief difference is the addition of a final paragraph which states, "Law enforcement officers, officers of the court and any licensed or state-regulated entities in the state shall affirmatively enforce article I, section 10 of the Constitution of Missouri, which specifies that no person shall be deprived of life, liberty or property without due process of law."

At its core, HB 1794 would make obtaining an abortion nearly impossible, as the bill makes women's rights to their bodies equal to those of the fetus they're carrying. And for some feminists, the name of the bill exposes the intersections of race and reproductive choice. Not to mention that Moon is employed by the same state that gave rise to the Black Lives Matter movement.

"By sponsoring this bill, Rep. Moon suggests that the state of Missouri codify into law the assertion that black women are killing their own children, are incapable of making decisions about their own bodies and cannot control their sexual desires," wrote Christine Assefa on Feminist Wire. "All of these characterizations perpetuate historical, violent and harmful stereotypes of black women that reveal the deeply rooted relationship between race and sexual politics."

Democratic Missouri representative Lauren Arthur, on the other hand, suspects the name of the bill — like the legislation itself — is foremost intended to provoke. "From the title alone it's a bill that's meant to inflame and cause strong opinions on both sides of the aisle when we as a legislature should be trying to bring people together," Arthur told Mic. "I have a problem with the name of the bill if only for the reason that it's meant to incite controversy."

Arthur suspected that Moon's main goal is to "win political points," but she expects HB 1794 to be met with heavy opposition as it advances from its early stages. Ultimately, she said, the bill is a distraction. "There are so many other opportunities to talk about women's health care and implement good policies that help women lead long, healthy lives," she said. Instead, she mentioned, on Tuesday there was a hearing in Missouri on banning fetal tissue donations.

In a legislature where women are vastly underrepresented, Arthur said she wonders what policy-making would look like with a more diverse legislative body. "I dream about what it would look like to have 50% of women as elected officials here. ... I suspect that if that were the case we would spend more time talking about education, creating job opportunities, building the kinds of communities we want to live in and spend less time politicizing and grandstanding on these issues."