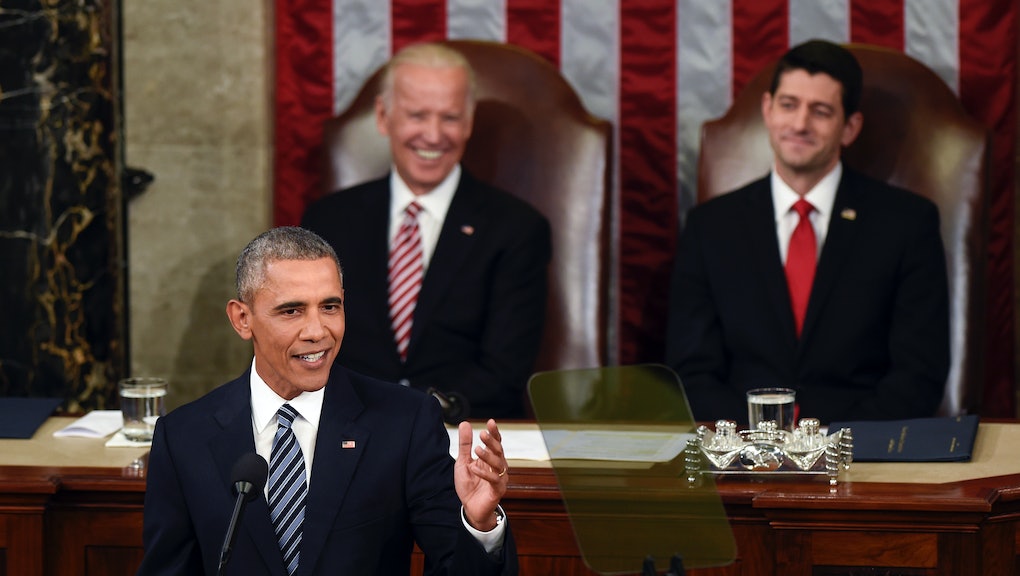 At his final State of the Union, President Barack Obama faced head-on what Republicans have argued is one of the most prevalent American fears: the threat from the Islamic State group, or ISIS, the terrorist organization that inspired recent attacks in Paris and San Bernardino, California. Speaking before Congress and a bunch of guests, Obama asked for the approval of an Authorization for the Use of Military Force, or AUMF, against ISIS, which would grant him the explicit authority for continued military action against the group in Iraq and Syria.

While he called "protecting Americans" the number one priority, he urged the nation to avoid building up or overstating the threat into a "World War III" — a statement that earned him the ire of many conservative viewers.

Obama's SOTU failed to satisfy the many skeptical conservatives who believe he's has been too soft on ISIS — even with his proposed AUMF — and has been downplaying the true level of their threat.

GOP candidate Texas Sen. Ted Cruz tweeted, "Tonight's speech was less a State of the Union and more a state of denial," following with a tweet that said, "We need a president who will defeat radical Islamic terrorism."

But Obama stayed strong on his stance, asking specifically for a new AUMF. "If this Congress is serious about winning this war, and wants to send a message to our troops and the world, you should finally authorize the use of military force against ISIL," Obama said, also adding that about 10,000 executed airstrikes have already targeted ISIS leaders, training camps and weapons.

"But as we focus on destroying ISIL, over-the-top claims that this is World War III just play into their hand," he said. Masses of fighters on the back of pickup trucks, twisted souls plotting in apartments or garages -- they pose an enormous danger to civilians; they have to be stopped. But they do not threaten our national existence. That is the story ISIL wants to tell. That's the kind of propaganda they use to recruit."

This is not the first time Obama has advocated for a new AUMF, which asks for limited ground troops for three years, and also repeal the previous AUMF, ABC reported. Last April, the proposal failed to gain its 218 votes, The Hill reported.

Still, Obama has been bombing under the 2001 AUMF, Vox reported. But the 2001 AUMF authorized military action against al-Qaida, which split with ISIS in 2014, so it's been stirring controversy within Congress and has been somewhat of a standstill for Obama.

"If you doubt America's commitment — or mine — to see that justice is done, just ask Osama bin Laden," Obama said. Here's a clip of Obama talking about ISIS in his State of the Union: