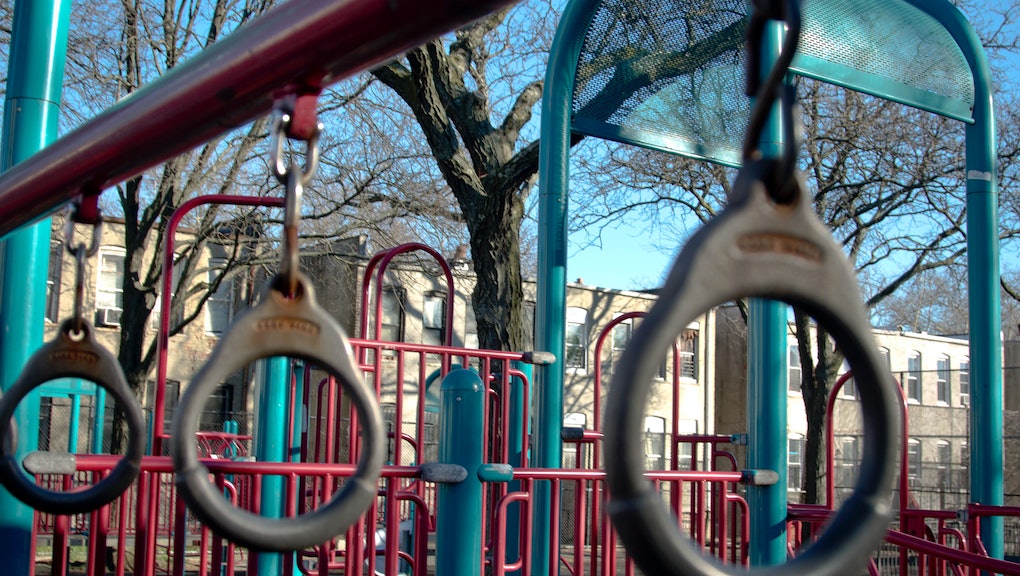 The Complicated Story of the Brownsville, Brooklyn, Rape Case

Ever since reports of the alleged gang rape of an 18-year-old woman in the eastern Brooklyn, New York, neighborhood of Brownsville on Thursday began circulating, new details have clouded the case. As evidence continues to surface — including the emergence of a short cellphone video that allegedly shows the woman partially undressed and on the ground, smiling, before the alleged rape occurred — reporters, lawyers and law enforcement officers are struggling to piece together what happened that night in Brownsville's Osborn Playground. What may have seemed like a clear-cut case from the beginning has since become muddied — for one, the suspects have said the sex was consensual.

According to reports from the New York Police Department, an unidentified 18-year-old woman was in the playground with her father at around 9 p.m. Eastern on Thursday when the two were held at gunpoint and the 18-year-old was gang raped. On Sunday, authorities said four male "teens" were in custody pending charges and the investigation was "ongoing." At the time, police were searching for a fifth suspect.

Osborn Playground is in the NYPD's 73rd Precinct. A phone operator at the precinct told Mic the office could not comment over the phone. However, a statement from the NYPD called for the public's help in identifying the suspects, images of whom were captured by the security camera from a nearby bodega and distributed to the press.

What the police say happened: According to police, the woman and her father "were approached by five black males, one of whom was armed with a gun." The statement continues that "the male with the gun pointed it at them and told the father to leave the area. The father complied and each one of the five suspects raped the victim."

"The father returned a short time later with two uniformed police officers and the suspects fled the location," the statement reads. "The victim was removed to Kings County Hospital where she was treated and released."

According to a statement Sunday from NYPD Deputy Commissioner of Public Information Stephen P. Davis, "The police officers immediately responded and located the victim. The suspects had fled. ... There was no delay in the police response. There were no 911 calls associated with the attack, contrary to media reports."

What the media reported: Speaking to Reuters, U.S. Rep. Hakeem Jeffries (whose district includes Brownsville) said the girl's father was "intoxicated" on the night of the incident, and that the father and daughter had been estranged for most of her life. Jeffries told Reuters the 18-year-old was raised in foster care and the father and daughter had been reunited recently.

Local television station WABC reported Sunday the father admitted he and his daughter were drinking in the park not far from a handball court when the five individuals approached. "One put a gun in my face telling me to run, and all of them had their way with her," he said, adding that he ran to a bodega nearby for help. WABC also spoke to the victim, who said she was fearful when her father left and that she didn't cry for help. "I didn't know what to do," she said. "I was in a panic mode."

Conflicting stories: More information reported Monday make the night's events seem less clear. The New York Post reported that a worker at the bodega where the father fled for help said the father was too drunk to give a proper account of what had happened and so refused to lend him the shop's phone.

"He was swaying side to side," an employee at Zaida Deli and Grocery told the Post. "He asked me, 'Lend me your phone.' I said 'no' ...  he didn't tell me it was an emergency or 'I need to call the police' or of course I would've given it to him or just called the police for him."

And according to unnamed sources who spoke to CNN, at least one of the suspects in custody told law enforcement officers the sexual encounter was consensual. In the suspect's version of the story, they came across the woman and her father having sex in the playground that night.

"We did get that information from two of the persons arrested, from no one else," said Police Chief of Detectives Robert Boyce, according to the Associated Press.

Multiple news outlets reported Tuesday on a 10-second smartphone video captured on the evening of the incident in which murmured voices and a snippet from one of the suspects can be heard. The New York Daily News reported one of the suspect's brothers came to police with the footage, which reportedly showed a partially clothed, "smiling" woman sitting on the ground.

The New York Times also reported that a male voice can allegedly be heard on the footage saying, "She said 'yeah.' If you said 'yeah,' it's lit, like, you know what I mean. I could tell you a freak."

Yet the claim the alleged rape was consensual came directly from the accused, according to Boyce, who spoke during a news conference at City Hall, according to the Times.

Police are awaiting on the results of DNA testing that was collected when the victim was taken to the hospital, Reuters reported.

The suspects: According to police reports, law officers took four male suspects into custody, all of whom are between 14 and 17 years of age. "Two of the individuals in custody surrendered at the 73 Precinct and two were apprehended," the statement reads. "One suspect is outstanding."

A fifth suspect, who is 18, was apprehended Tuesday.

In the statement from the NYPD, a 14-year-old, two 15-year-olds and a 17-year-old were charged with sex abuse, two counts of a criminal sex act and rape. The report did not include charges against the fifth suspect.

In Brownsville: Meanwhile as the investigation continues, Brownsville residents took aim at law enforcement for not alerting the community sooner to the sexual assault. "For community leaders and the community to find out about this horrific crime from the tabloids is not acceptable," said borough president Eric Adams, according to the Post.

Yet despite the complexities of this case, crime in Brownsville has been steadily declining. Perhaps ill timed, directly before announcing the alleged rape on Twitter, the tweet to proceed that announcement trumpeted a 5.8% decline in New York City's crime rate since January 2014.