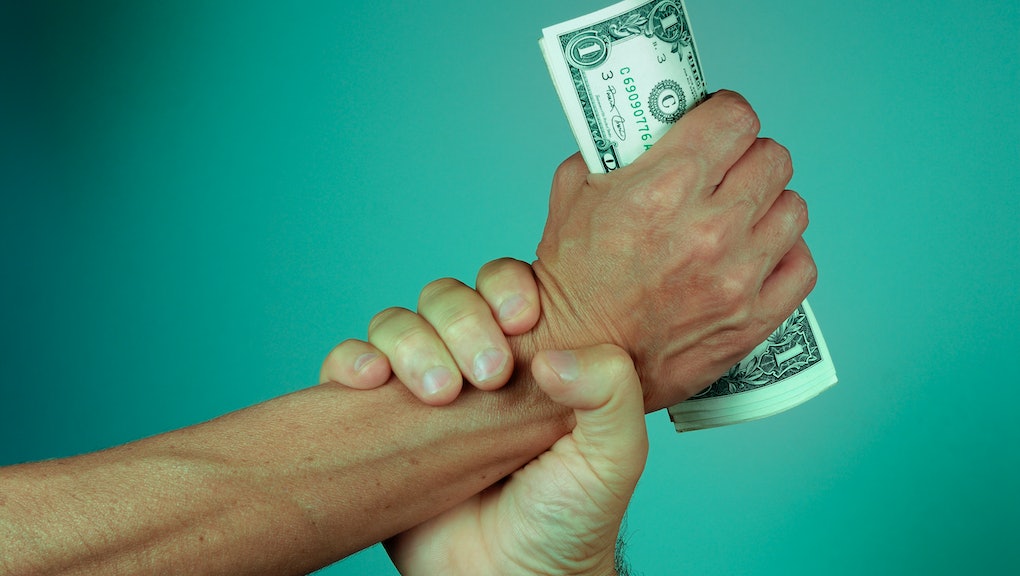 What Happens When Your Partner Controls Your Wallet — And Your Life

Sandra*, 29, was standing in line at Target the first time she truly began to understand that she was in trouble. Piled in front of her were diapers for her four-month old daughter, a can of soup, and various cleaning products. She had decided to spend the day in the mall, having just finished eating a quick lunch at the food court.

When the cashier slid her card through, she apologized. "I'm sorry, ma'am, this card is declined," the woman told her.

Sandra was confused. After all, she had just been paid 3 days ago. But when the cashier ran her card again, the result was the same. It wasn't until Sandra called her bank that she found out what had happened: her husband had transferred her funds from her checking account to a savings account only he had access to. They had just had an argument about his spending habits.

"He [said] that if he didn't monitor my money, then I wouldn't be able to handle it myself," she later told Mic.

Financial abuse is often defined as what happens when one partner uses money as a weapon or a tool to control the other. It isn't often discussed because unlike domestic violence, its effects are largely invisible to the naked eye. It can manifest itself in a wide range of ways, varying from a partner moving money to checking accounts someone else has access to, to threatening to turn someone out on the street for not being able to pay rent. Often, it's comorbid with other forms of abuse: According to The National Network for Ending Domestic Violence, 98% of domestic violence cases also included financial and economic abuse.

When this type of abuse occurs, it is often bubble-wrapped in what appears like a normal relationship. A card being declined at Target may not leave a bruise or a black eye or an obvious sign that something sinister is happening, but it represents the exact type of power dynamic that leaves someone who is financially unstable trapped in an abusive relationship.

Becky*, 34, said she began to realize she was in a financially abusive relationship when her husband kept pushing her to have more children. "As soon as I was sending one off to preschool, he was ready for another one," she told Mic. The longer she was required to stay at home and provide care for her children, the less opportunities she had to be economically self-sufficient.

Eventually, Becky eventually gave up her job as a receptionist at a dental office. Every time she took a trip to Walmart for clothing or food, she would get a call from her husband the moment the card was run through the register. "He would sit at work and check the bank account statements. When I would buy something from anywhere he would call me up furious, demanding to know what I had purchased," Becky said.

Becky continued to stay in the marriage, because it was the only way she knew her children would be clothed and fed. Her own home started to feel like a prison. Eventually, she left her husband and moved in with her mother, taking her four children along with her.

"When you're being abused in that way, it definitely breaks down your self-confidence. Everything felt like his. Even my own children felt more like his than mine, because he reminded me constantly how I needed him and his job," Becky told Mic.

According to a 2004 paper from Bowling Green State University, men who financially abuse their partners often do so to make their partners appreciate them more by isolating them from the rest of the world, making them unable to financially contribute to their households. Often, it can be part of a "wider picture of domestic violence," according to LeavingAbuse.

The feeling of isolation manifests itself in various ways: If a partner has control of your finances, for instance, that means you're unable to put gas in their car to escape, or unable to visit friends for lunch without the charge showing up on your bill. Essentially, this leaves the abused party with no hope of planning a safe route of escape. Of women who were surveyed after leaving financially abusive situations, 88% reported staying longer because they had nowhere else to go, according to LeavingAbuse.com.

Because money is a taboo topic for people to openly discuss, regardless of their financial situations, it's often difficult to correctly identify and help those who are being financially abused. Laura*, 23, for instance, was living in New York City with her girlfriend when she was laid off from her job at a PR firm. Instead of being able to call a friend and ask for help making ends meet, Laura's former girlfriend promised to help pay her rent. Six months later, Laura was unable to find work and felt trapped in an abusive relationship with someone she was financially dependent on.

"I don't think I'm ready to leave just yet...but I'm getting there."

"At this point I feel like i'm her live-in maid, and she reminds me of this constantly," Laura told Mic of life with her former partner. "If I were to be honest with myself, I feel like a gross freeloader. Which I know deep down I'm not, I just don't have many other options at this point."

Laura has since broken up with her girlfriend and switched her cell phone number so she can no longer contact her. While looking for a full-time job, she's started taking temp jobs and staying on her friends' couches.

For her part, Sandra is still with her husband, though she says she's taking baby steps toward the day she finally walks out the door.  She's started couponing more and asking her husband for cash directly in order to squirrel away enough funds for a lawyer when the time comes.

"For so long it just felt like he was being really careful with money, but I'm so looking forward to the day I can treat myself to a pair of shoes without someone screaming at me on the phone," Sandra told Mic.

"I don't think I'm ready to leave just yet...but I'm getting there."

*First names have been changed to allow subjects to speak freely about private matters.