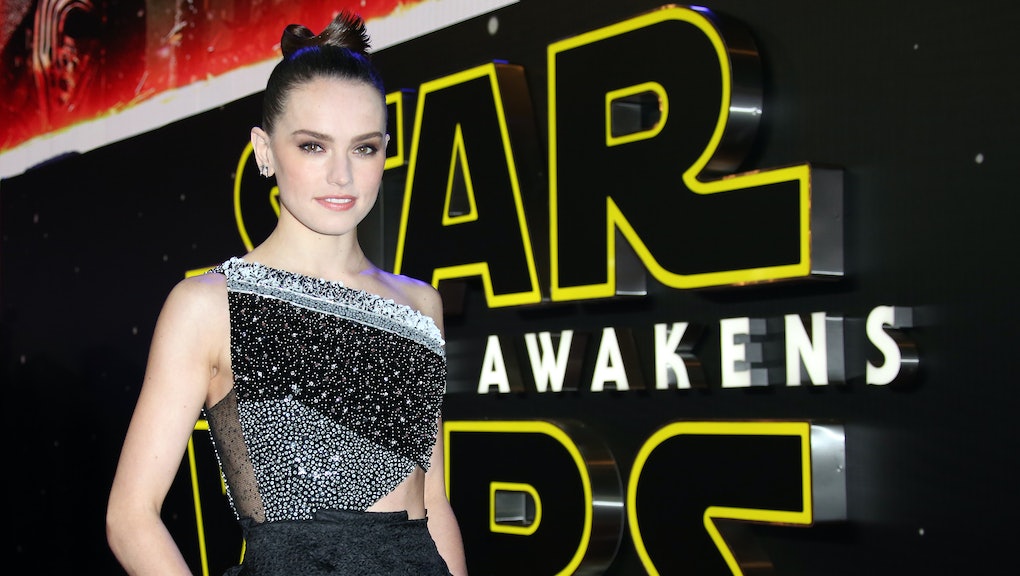 It's still taking in money at the box office at a historic rate, but suffice it to say the majority of fans have already seen Star Wars: The Force Awakens at least once — likely more. Therefore, the internet is currently a treasure trove of The Force Awakens fan theories, which range from plausible to utterly horrendous. Among the bunch, though, four concepts have consistently stood out.

The theory floating around the most is that Rey is the daughter of Luke Skywalker. In the film, Rey has a very intense, vision-incuding reaction to touching Luke's old lightsaber, which doesn't really work under the guise of "just being Force-sensitive." Additionally, Jakku has a lot of physical similarities to Luke's home planet of Tatooine — namely, all the damn sand. What hurts this theory most of all is the suggestion that Luke would have had a significant other, and someone loved and lost if you consider that he is now a lone hermit (he did have a wife, Mara Jade, in the Expanded Universe, but that is no longer canon after George Lucas sold Lucasfilm to Disney). What's more, it would be very hypocritical for Luke to do so. As a traditional Jedi, he wouldn't romantically involve himself with anyone. Not only is it against the Jedi way, but his father's turn to the Sith over the fear of losing his wife, Padmé Amidala, is the embodiment of why that rule is necessary.

Rey has at least one Force-sensitive parent — and one we already know: There have been several theories floating around about the true identity of Rey's parents, and the three most popular ones have their merits.

Another theory is that Rey is the daughter of Han Solo and Leia Organa, but those involved simply don't remember. As Vox's Todd VanDerWerff wrote, Luke could have mind-wiped his closest family (while a Jedi has never been seen doing it onscreen, it's not a stretch to say it's a potential ability) to keep Rey away from the wrath of Kylo Ren aka Ben Solo. Mind-wiping your immediate family would be a very disturbing concept, which could also explain why Luke exiled himself — he couldn't deal with what he had to do.

The third theory is equally compelling: Rey is related to Obi-Wan Kenobi. For this hypothesis, one has to consider Rey's English accent. After all, if she was a Skywalker, she'd be the only one who had an English accent, which would be odd at the very least. It's also worth noting that while actress Daisy Ridley is British, they could have simply asked her to do an American accent.

John Boyega, who played Finn, is British, and they requested a non-English accent for the role. Furthermore, in Rey's crazy, acid trip sequence, Ewan McGregor reprises Kenobi's voice; combined with some clever editing along with the late Alec Guinness' original role, the character says, "Rey, these are your first steps." For director J.J. Abrams to go out of his way to use Obi-Wan could mean more than just showing off a fancy editing technique.

Supreme Leader Snoke is Darth Plagueis: While The Force Awakens provided audiences a glimpse of the First Order's Supreme Leader Snoke, it was through a hologram, and the most identifiable features were his lanky body and scarred face. Other than that, his identity is a vague mystery. However, several outlets have suggested that Snoke is actually Darth Plagueis, the Sith Lord who trained Darth Sidious (also known as the Emperor).

The evidence is, admittedly, quite convincing. Snoke's appearance is similar to the Munn species in Star Wars, the species that Darth Plagueis is supposed to be. He is also referenced in Revenge of the Sith by Darth Sidious — still Chancellor Palpatine at the time — talking to Anakin Skywalker about the Sith Lord's tragic death. He tells Anakin this story after the future Darth Vader dreams of his wife dying in childbirth, because Plagueis had become so powerful with the Force he was able to "keep the ones he cared about from dying."

Sidious then recounted how his apprentice killed Plagueis in his sleep but it's entirely possible that Plagueis survived in a Voldemort-esque fashion. It would also directly tie the new villain to the rest of the Star Wars films as the master of, well, Darth Vader's master. Perhaps the most compelling evidence of the Snoke-Plagueis connection is entirely aural: The Snoke theme in The Force Awakens sounds strikingly familiar to the score used in the Revenge of the Sith scene.

Rey will struggle with the Dark Side: In The Force Awakens, Rey catches onto the Force quite quickly, perhaps even more than Anakin Skywalker initially did as a child. Of course, dealing with such a power could end up pushing her down a similar path as Darth Vader.

According to an apparent movie script obtained by Slashfilm, The Force Awakens goes into further detail to show that Rey, rather than Kylo Ren, has a harder fight with the Dark Side. In a report on the release by Moviepilot, the script hints that Ren fears for his life in the climactic lightsaber duel, and that the main reason Rey held back when she had the upper hand was seeing that she was standing "on a greater edge than even the cliff — the edge of the dark side." Therefore, Star Wars: Episode VIII could potentially deal with Rey's exploration of her enhanced Force abilities and the pitfalls that come with them.

Though Slashfilm reported that it was obtained via the Writers Guild of America, the script's legitimacy is still up the air. As a result, like any theory, it remains speculation instead of concrete evidence.

Kylo Ren is essentially a Jedi double agent: Specifics on Kylo Ren's move to the dark side are still murky enough that, some suggest, he could be a double agent for the Jedi to take down Snoke and the dark side once and for all. Originally written in grammar Nazi-inducing all caps by Tumblr user murphcooper, the post gained a lot of traction and suggests that Ren is working for the Jedi, and that Luke is quite aware of what Ren is doing.

Basically, he's still Ben Solo underneath it all, and he had to kill his father in order to fully "turn." The theory adds that Han Solo was aware of what his son had to do, which is why he said "anything" when Ren asked for help. It would make for a gut-wrenching ordeal for Ren, but one that would easily redeem the character's actions in The Force Awakens. The main issue with the theory are Han and Leia's conversations in the film, which emphasize that Ren needs to be brought back to the light and that he has "too much Vader in him," rather than lamenting his present situation. The wording there is key.