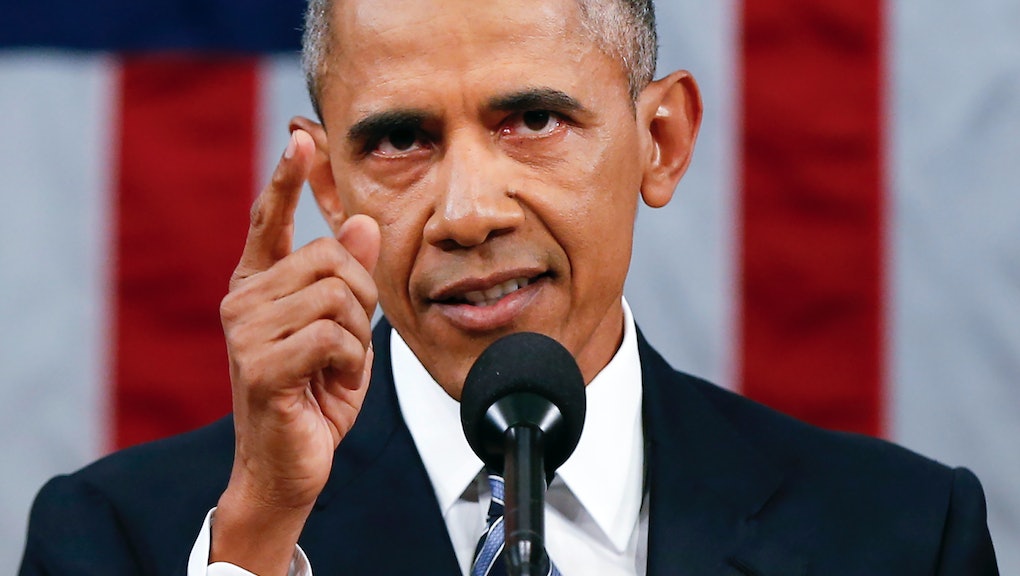 Of the many notable moments from President Barack Obama's final State of the Union address Tuesday night, there was one in particular that stood out: Obama's challenge to Republican candidates who have lambasted his commitment to defeating the Islamic State group, also known as ISIL or ISIS.

"When politicians insult Muslims, when a mosque is vandalized, or a kid bullied, that doesn't make us safer," Obama said. "That's not telling it like it is. It's just wrong. It diminishes us in the eyes of the world. It makes it harder to achieve our goals. And it betrays who we are as a country."

The president's passionate plea to stem the climate of Islamophobia that has bubbled up since shootings in San Bernardino, California, is extremely significant, and not only because it was the top moment on Facebook during his entire address.

With those six sentences, Obama not only challenged the vicious narrative of intolerance that has been front and center on the Republican campaign trail. He also made one of the single best foreign policy arguments for defeating ISIS.

Here's why: At the moment, the United States and our allies are mired in a vicious cycle that looks something like this:

• ISIS wages a terrorist attack on the West.

• The West bombs ISIS in Syria and Iraq in response.

• Refugees flee Syria and Iraq as a result.

• Refugees confront a climate of Islamophobia when they arrive in the West.

• ISIS uses this climate to radicalize and recruit new soldiers.

This is, of course, a simplification, but it serves to highlight the direct connection between U.S. foreign policy abroad and Islamophobia back home, and the extent to which the domestic climate of hostility toward Muslims plays a direct role in America's susceptibility to future terrorist attacks.

Since the San Bernardino shooting, America has experienced an unprecedented rise in Islamophobia, the likes of which we have not witnessed since 9/11.

"The climate for Muslims living in the West these days is as bad as it was after 9/11," prominent Egyptian-American journalist and scholar Mona Eltahawy recently told Mic. "Women who are visibly Muslim through the various veils they wear are bearing the brunt of this."

Indeed, the data bear this out: There were 18 attacks against Muslims in the United States between the San Bernardino attack and Dec. 17, and 38 since the Paris terrorist attack, a sharp three-fold rise over the average, according to data from the FBI (a full list of attacks can be found here). That comes against a backdrop in which Republican frontrunner Donald Trump has called for a "total and complete shutdown" of Muslims entering the country. Ben Carson declared Muslims unfit to be president, and dozens of Republican governors have come out against accepting Syrian refugees in their states.

ISIS and other terrorist groups take full advantage of this hostile climate to garner new recruits. As counterterrorism analyst Harleen Gambhir wrote in the Washington Post, "The group calculates that a small number of attackers can profoundly shift the way that European society views its 44 million Muslim members and, as a result, the way European Muslims view themselves. Through this provocation, it seeks to set conditions for an apocalyptic war with the West."

Look no further than the revelation that Somali terror group al-Shabab used audio of Trump in a recent video to recruit new soldiers to see how this strategy is playing itself out.

Breaking the cycle: The U.S. needs to break this vicious cycle if it hopes to defeat ISIS.

Despite some of his critics on the left, who have called for the U.S. to stop bombing ISIS in Syria and Iraq altogether, Obama has made the calculation that the military campaign is necessary to provide some semblance of stability and prevent the nation from getting dragged into another ground war in the Middle East. With a full-scale invasion and occupation off the table, reducing the climate of Islamophobia that Muslims and new refugees face when they flee to the West represents one of the most important steps the U.S. can take to undercut the ideological underpinnings of ISIS' strategy.

To do so will require the recognition that Muslims themselves bear the brunt of ISIS' brutality. It will require us to acknowledge that the overwhelming majority of Syrian refugees are well-educated and hardworking young people who are fleeing the very same terrorists America is fighting against. And it will require us to ramp down the fiery rhetoric and counter the nagging narrative that equates the world's 1.6 billion Muslims with terrorism.

Obama has spoken out against Islamophobia before, most notably in his Oval Office address to the nation in the immediate aftermath of the San Bernardino shooting. But the fact that the president made this a focus of his final State of the Union, with millions of viewers watching at home and the added symbolism of a Syrian refugee looking on as one of his guests, will serve to build newfound trust among Muslims in the West, and in so doing, help break the vicious cycle and defeat ISIS.

Whether Obama's words translate to a sea change nationwide, or pressure Republican candidates to scale back their Islamophobic rhetoric on the campaign trail, remains to be seen. But with the stakes so high, the president's six sentences are an important first step.