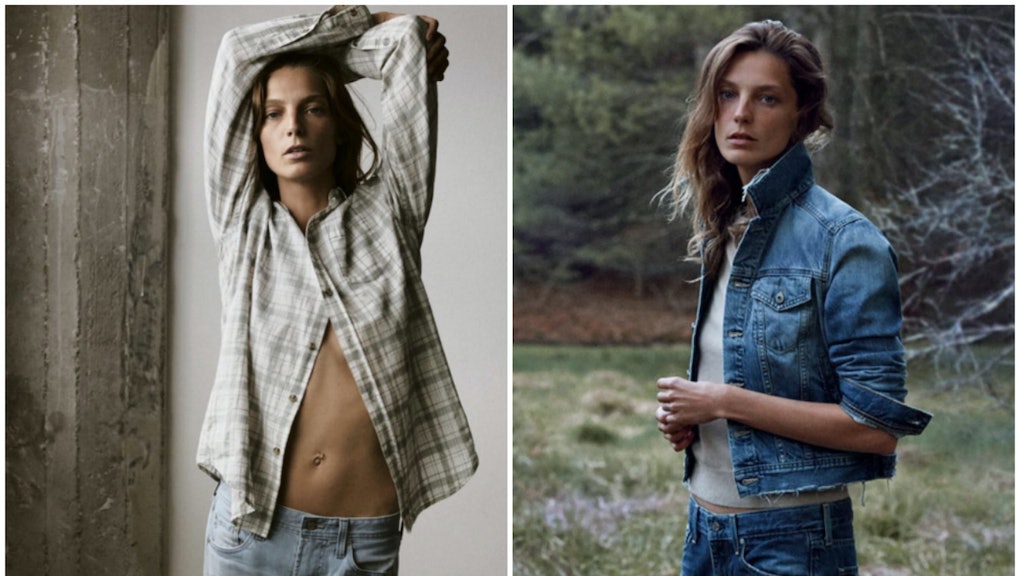 The fashion campaigns we know and love tend to serve basically one purpose: They make us want to buy things. But ads, of course, can also send social messages, as they're doing more and more these days.

Take the latest campaign for AG. For its spring 2016 campaign, the high-end denim company asked the legendary Daria Werbowy to be the face of both their men's and women's line of denim.

In the campaign, which was shot by photographer Cass Bird, Werbowy wears spring basics like light denim, flannel shirts and a rather trendy turtleneck. The clothing doesn't really scream "male" or "female," which goes to show you how thin that line between the two gendered attires tends to be.

According to Refinery29, AG was attracted to the idea of showcasing both their men's and women's attire on one person because of Werbowy's versatility, as well as the growing trend of gender-neutral model casting and clothing.

"It's not often you have the opportunity to work with someone like Daria," Johnathan Crocker, AG's director of global communications, told Refinery29. "And part of those advantages are that your parameters, so to speak, are limitless. We saw the recent trend of some designer brands shooting men in womenswear and thought doing just the opposite could/would be interesting and noteworthy. We didn't see any other brands doing it, so we thought the timing was right. There are few women who could successfully pull this off, and we truly [believed] no one could do it better than Daria."

What's that "recent trend" Crocker is talking about? Earlier this month, actor and Twitter phenom Jaden Smith became the face of Louis Vuitton womenswear. In the advertisements, Smith donned a skirt and posed alongside professional models who identify as women.

Smith came along after other high-end brands also decided to jettison gender lines. In September, an 11-year-old boy rocked a pink coat and heels for an ad campaign for Acne Studios. In August, the H&M spinoff brand & Other Stories cast transgender models Hari Nef and Valentijn De Hingh for a capsule collection. And at New York Fashion Week last fall, womenswear designers like Eckhaus Latta and Hood by Air cast their shows with a gender-fluid mindset and subsequently made headlines, while designers at Men's Fashion Week did the same.

And it's not just avant-garde designers. As a report from retail analyst firm NDP Group noted in August, "retail is becoming less gendered," thanks to the runways but also mainstream trends that cross gender lines like athletic wear.

In 2015, it was a trickling trend. In 2016, gender-neutral clothing and ads may just be the next big thing.