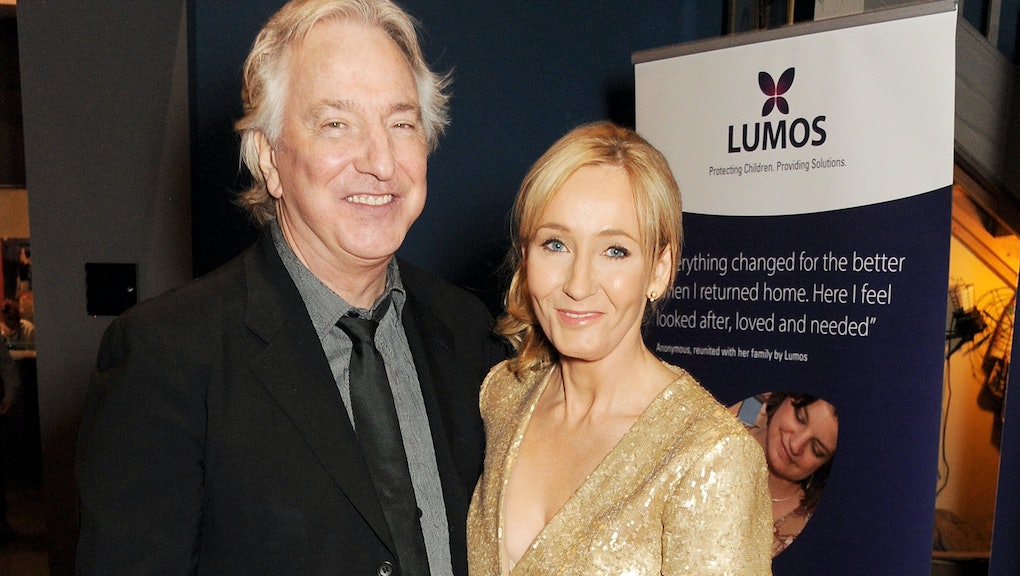 J.K. Rowling: Alan Rickman Was "a Magnificent Actor and a Wonderful Man"

In the wake of Alan Rickman's passing, J.K. Rowling paid tribute to the man who gave her professor Severus Snape life on screen for a decade.

"There are no words to express how shocked and devastated I am to hear of Alan Rickman's death," she wrote. "He was a magnificent actor and a wonderful man."

Rowling and Rickman had a great working relationship throughout the production of the Harry Potter film series. The author worked closely with the actor to let him know background details of the franchise's most mysterious character — while keeping him a bit abreast to make sure he was still surprised himself.

"She gave me one tiny, little, left-of-field piece of information that helped me think that he was more complicated and that the story was not going to be as straight down the line as everybody thought," Rickman told Hitfix in 2011. "If you remember, when I did the first film she'd only written three or four books, so nobody knew where it was really going except her. And it was important for her that I know something, but she only gave me a tiny piece of information which helped me think it was a more ambiguous route."

Rickman wrote Rowling an open letter after the conclusion of the Potter series to thank her for her work as well. "The story needs a great storyteller," he wrote at the time. "Thanks for all of it, Jo."

On Twitter, Rowling also paid tribute to Rickman's family and wife Rima. "My thoughts are with Rima and the rest of Alan's family," she wrote. "We have all lost a great talent. They have lost part of their hearts."