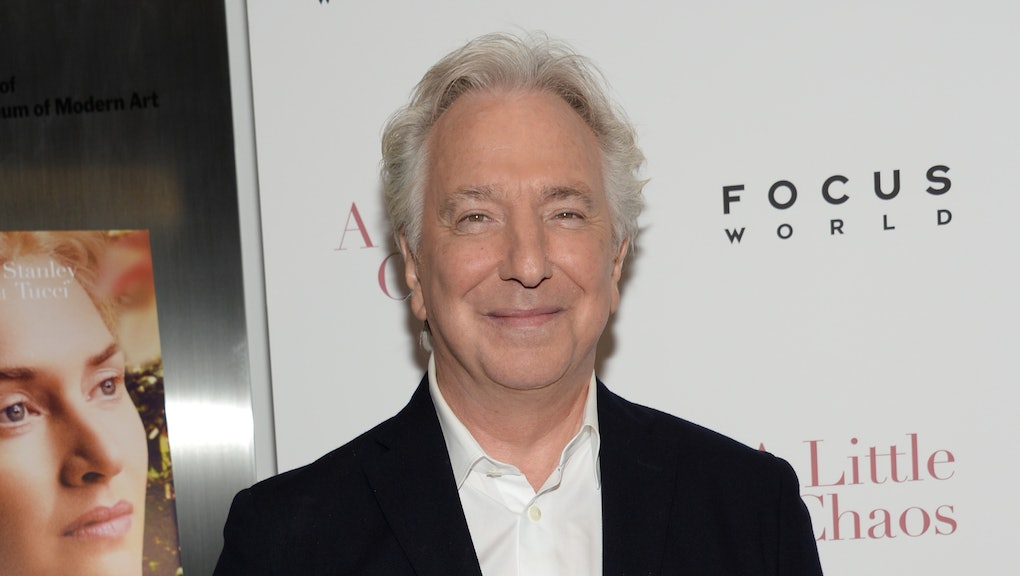 With the world collectively recovering from the death of David Bowie, the culture scene was hit with another devastating blow: British actor Alan Rickman died Thursday from cancer at the age of 69.

Rickman's illustrious career has seen him undergo many versatile roles; depending on your age, you may associate him as the villainous Hans Gruber in Die Hard, the charming Colonel Brandon in Sense and Sensibility or the ever-suspicious and emotionally complex Severus Snape in the Harry Potter series. Among all his roles, eight stand out most of all.

Love Actually is primarily a light-hearted rom-com, but Rickman's portrayal of Harry is anything but. Harry succumbs to the charms and flirtations of his secretary, and decides to buy her an expensive necklace, much to the dismay of his wife, Karen (Emma Thompson), who eventually finds out. Though he plays a character who isn't worthy of the audience's sympathy, his anguish is as almost hard to stomach as Karen's.

Colonel Brandon in Sense and Sensibility (1995)

Sense and Sensibility features a talented cast, but even so, Rickman stands out as the elderly bachelor, Colonel Brandon, who immediately falls in love with Marianne (Kate Winslet). Though she does not fall for him at first, she later realizes his heartfelt sincerity is genuine and moving. In other words, he's total husband material.

In everyone's favorite Christmas movie, Rickman portrays one of the greatest action movie villains of all time. The character is so iconic, even his death (falling, dramatically, off a building) is constantly mimicked in films. Die Hard was also Rickman's first feature film role, which makes his fiendish portrayal all the more impressive.

Sheriff of Nottingham in Robin Hood: Prince of Thieves (1991)

In another villainous role, Rickman plays opposite to Kevin Costner's Robin Hood as the menacing Sheriff of Nottingham. What helps Rickman stand out is the level of enthusiasm thrown into the role. He's not a droll villain — he's a lively, maniacal character hell bent on catching and killing the Prince of Thieves (even if that means calling off Christmas).

The full scale of Rickman's Snape isn't possible unless you've seen the final installment, or you already knew about the character from the book series. After all, Snape's true loyalty lies with protecting Harry Potter, and the emotional complexity in the role — particularly after he kills Dumbledore — makes you seriously question whether he is a straightforward villain or something else altogether. His death, and the tragic aftermath, is an emotional rollercoaster.

Galaxy Quest has no right to be as funny as it is. It asks the unnecessary concept of what would happen if you sent the actors of the fictional show Galaxy Quest (basically, Star Trek) and they stumbled upon real-life aliens. However, it's a smash hit, and Rickman's role as the ship's science officer is the best of the bunch.

Rickman's flexibility is in full effect in Sweeney Todd, a musical horror film. That means, of course, that Rickman had to sing as Sweeney Todd's (Johnny Depp) antagonist. Rickman's character is all kinds of awful, having raped Sweeney Todd's wife, which caused her to poison herself in the aftermath and helped create the "Demon Barber" persona. While Todd commits heinous, violent acts throughout the film, it's almost redeemable so he can get his hands on Turpin.

It's strangely poetic that one of Rickman's finest roles is as the ghost of a boyfriend, Jamie, who helps his girlfriend move on from his untimely death to find another love. His character does this by cleverly becoming a nuisance, so much so that she finds his presence more frustrating than charming. In the end, it works and she moves on, much to Jamie's delight. Whether he was a product of her imagination, or an actual ghost, the message is clear: Move on, and be happy.