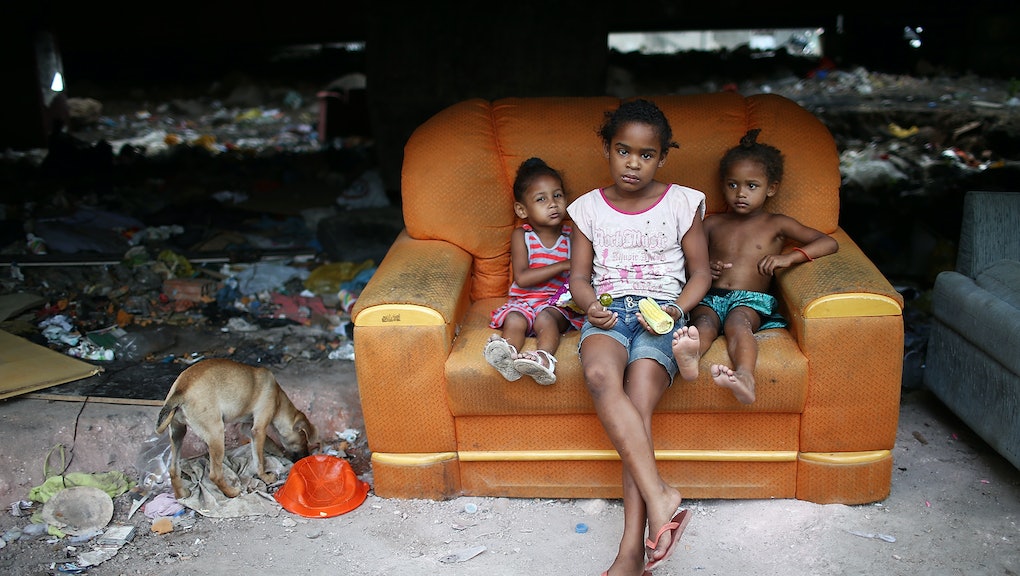 The World Bank has released a report citing the many ways in which the tech industry is making it harder for people around the world to make money. Its findings come just a week after prominent venture capitalist Paul Graham launched a debate about income inequality and Silicon Valley's role in widening it.

Coming in at over 350 pages, the World Bank document details how the tech economy is contributing to the growing divide between the world's poorest and richest.

"Although there are many individual success stories," it reads, "the effect of technology on global productivity, expansion of opportunity for the poor and the middle class and the spread of accountable governance has so far been less than expected."

The paper says that global productivity has slowed and inequality is fast on the rise, despite the growth of technology. This is especially true in developed nations like the U.S., though the trend is quickly spreading to less developed regions as well.

What's causing the divide? There are several contributing factors for why the growing technology sector is only benefiting a select minority.

While internet access is fairly pervasive in major cities like Shanghai and Beijing, more remote areas are less likely to have it. Chinese citizens have additional hurdles to accessing the internet: The state government determines which sites its citizens can access through what's known as the "Great Firewall of China," and the internet is also quite slow, causing problems for businesses there.

It's not just lack of online access that's preventing more people from getting tech jobs. The proliferation of technology has lead to many lower-level jobs being automated. People who ordinarily would work those jobs don't have access to the kind of education that would yield the right credentials for higher-value work. As a result, they end up competing for a diminishing swath of low-wage, low-skill jobs. Meanwhile, tech companies have positions available for highly skilled workers, like engineers.

Those who can afford the appropriate education or have the resources to acquire this in-demand expertise rise to the top of the tech industry. Once at the top, they can then work with lawmakers to keep regulations minimal, in effect allowing the industry to continue to benefit a chosen few.

"The digital revolution can give rise to new business models that would benefit consumers, but not when incumbents control market entry," the report reads. The problem is that while those participating in the tech economy like to wax poetic about how anyone can join, entry into the ecosystem is actually tightly controlled by those already in it. What's more, individuals already invested in it tend to use their power to hire people with top-tier educations and financial resources, thus excluding those from lesser circumstances.

"Not surprisingly, the better educated, well connected and more capable have received most of the benefits — circumscribing the gains from the digital revolution."

In general, the report says, the tech sector favors monopolies — think Google's stranglehold over digital ads, Microsoft's long domination of computer software and Facebook's social media monarchy. Counter to what many of Silicon Valley's elite would say, the tech industry doesn't foster competition. Companies innovate early, scoop up a majority of the market share and then hold onto it. To change that trend would mean sweeping regulations.

What can be done? For starters, everyone needs access to the internet, but that's not enough, says the report.

Though everyone needs access to the internet in order to compete in today's technologically advanced economy, there needs to be other supports in place to open up the tech economy — like better laws. The report prescribes more comprehensive regulation to "create a vibrant business climate." That means giving companies freedom to innovate, while also making the field more competitive. No more monopolies.

Furthermore, people of all economic backgrounds need training. The World Bank calls upon "accountable institutions" to help empower the masses with the necessary skills. Such an entity could also help bring some accountability to the space and help develop industry-wide standards.

Inclusion, efficiency, innovation: Luckily, there are already elements of the tech ecosystem that are conducive to helping more people get involved in the technological revolution seizing the globe.

First, the internet is inherently inclusive, the World Bank writes. Once connected, people have the opportunity to start a business online without a lot of capital or bureaucratic hoops. For instance, a person does not need to take out a small-business loan or prove credit worthiness to start a shop online. Similarly, a person might rent out a room in their home on Airbnb or sell a service with few assets.

"Access to the internet is critical, but not sufficient."

Platforms like Amazon or the China equivalent Taobao help bring traffic to online shops. Homejoy and European Helping bring paying customers to independent services. That means that online businesses don't have to worry about whether customers will be able to find their operation.

Plus, technological adoption now is happening faster than in any other time period.

Ultimately, unlocking this potential will take some good ol' analog grunt work. The report concludes that in addition to making the internet more widely available and creating meaningful legislation to make the tech industry a more open economic space, innovators need to find a new way to educate people who lack access. That will require a comprehensive effort aimed not only at providing technological skills, but the social tools for navigating these new work environments.