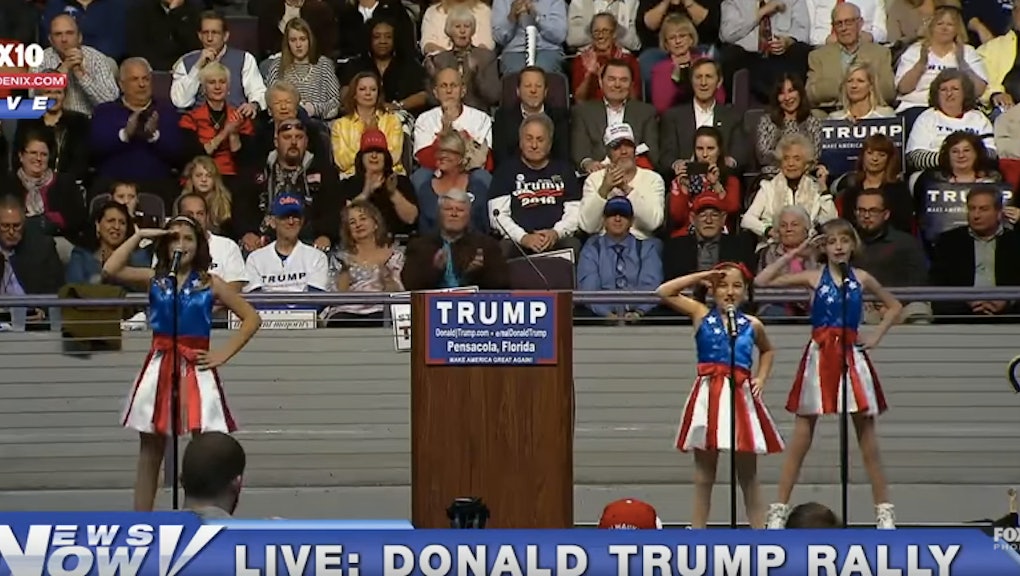 The internet is going wild over the "Freedom Kids," a group of Donald Trump-supporting young girls who combine the costumed cuteness of Katy Perry, the patriotic catchiness of the Andrews Sisters — and possibly the ruthless worldview of their preferred candidate.

The militantly adorable or adorably militant — your call — songstresses wowed the crowd at a Wednesday rally in Pensacola, Florida, with lyrics such as, "President Donald Trump knows how to make America great/ Deal from strength, or get crushed every time!"

Fans of the Republican presidential frontrunner put their hands together for the girls' combination of a cheerleading program and military drill. They also reportedly sang the national anthem.

"Cowardice — Are you serious?/ Apologies for freedom? I can't handle this!" they sang. "When freedom rings, answer the call!/ On your feet! Stand up tall!"

While the group is made up of children, their manager, Jeff Popick, has described their aim in decidedly adult language.

Popick said in a November statement promoting the Freedom Kids that President Barack Obama "has abdicated his first responsibility as commander-in-chief and he's betrayed sacred friendships with countries such as Israel ... Then, Obama cites these failures — he created — as reasons for not doing more. These behaviors have put the freedoms we cherish in grave jeopardy, but freedom is our middle name."

The website for the group — which actually has five members, although only three skipped their way into the hearts of Trump fans on the Florida stage — describes the Freedom Kids as "weighing in at a collective 300 pounds and 20 feet tall" and featuring "Alexis (8), Bianca (10), Izzy (10), Sarah (12) and Victoria (12)."