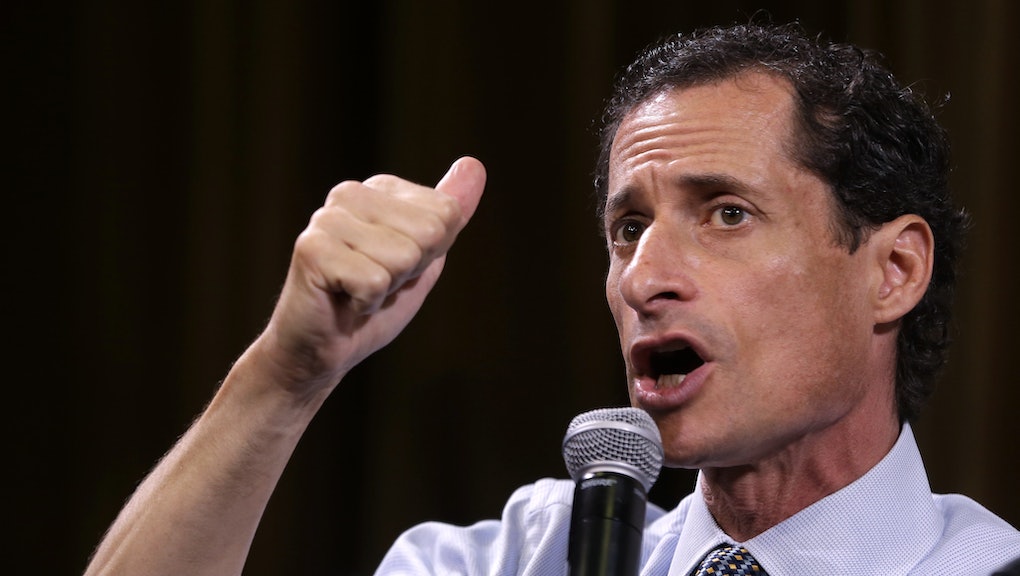 During the 2009 debate over health care reform, then-Rep. Anthony Weiner (D-N.Y.) was one of the most dogged advocates for a single-payer system, proclaiming in the Huffington Post that a government-funded insurance system was "just what the doctor ordered."

Late that summer and into the fall, Weiner became a fixture on cable news programs, where his impassioned jeremiads against insurance companies and the inefficiencies of the nation's employer-based health care model helped him attain status as a progressive celebrity.

Weiner succeeded in convincing then-Speaker of the House Nancy Pelosi to hold a vote on a single-payer system, but agreed in November 2009 not to force the vote after all, citing a desire to help move forward legislation that retained a role for private insurance companies but would also have established a government-run "public option" insurance system to compete with private plans. (The Senate ultimately stripped the public option from the Affordable Care Act.)

"I feel very strongly that the employer-based model is not the way to go and single-payer is the better way," Weiner told the New York Times in an interview at the time. "But I never wanted it to be the situation where we literally let the perfect be the enemy of the good."

A new single-payer fight: Weiner's concession to political reality didn't mark the end of the single-payer fight. Six years later, Sen. Bernie Sanders (I-Vt.) has moved the single-payer debate to the forefront of the national conversation as he contends for the Democratic presidential nomination, advocating for a government-run, "Medicare for all" insurance plan similar to those found in many European countries. Sanders has come under heavy criticism from rival Democratic candidate Hillary Clinton, whose campaign is taking Sanders to task for a lack of specificity in how he'd pay for his plan and assailing the senator for wanting to "dismantle" the existing health care system.

"Bernie Sanders should begin every sentence with, 'I'm proud I voted for Obamacare.'"

The Democrats' single-payer spat would seem to put Weiner in an awkward position: He's a longstanding champion of single-payer as a "better way" than the employer-based model the Affordable Care Act preserved. He also happens to be married to Huma Abedin, Clinton's longtime aide and close confidant.

But Weiner told Mic that he has no difficulty in sizing up this battle: The single-payer advocate emphatically said that the single-payer candidate is wrong.

"This is evocative of exactly what happened in Congress," Weiner said in a phone call, comparing Sanders' call for a single-payer system to his own ill-fated effort to hold a vote on the issue seven years ago. "It became pretty clear that it would be such an enemy of the good."

Weiner's objection isn't that Sanders is talking up the merits of a single-payer system, which the senator told Fusion this week is the optimal way of "providing health care for all" while removing the profit motive from the system. Instead, Weiner believes that Sanders is framing the debate in politically counterproductive terms by suggesting that the Affordable Care Act has been a failure and must be scrapped.

"We just invested a lot in improving the employer-based model," Weiner said. "I don't think there's anything wrong with allowing a discussion about it, but it would be strange to nominate a Democratic candidate running on a platform of scrapping Obamacare."

In seeing room for a discussion on single-payer, Weiner parts somewhat from the Clinton camp, which has faulted Sanders for inserting the issue into the campaign. In a conference call with reporters on Wednesday, Clinton policy adviser Jake Sullivan suggested that Sanders was unwise to spark a conversation on single-payer. "Now is not the moment to plunge this country back into a divisive debate over health care," Sullivan said.

By contrast, Weiner told Mic, "I think having this discussion is very valuable. The danger is not the substance of advocating for single-payer. If you had to construct a system from scratch, you'd construct a single-payer system."

Defending health reform: But Weiner added that Democrats now confront a choice over "whether we want to continue the progress we have made, or whether we want to slam the breaks and go into reverse." Sanders, he said, hasn't done enough to tout the benefits of the health care reform law in the face of "slander" from its Republican opponents.

"Bernie Sanders should begin every sentence with, 'I'm proud I voted for Obamacare. Here are 15 things in America that are better for it,'" Weiner told Mic.

Data from the Centers for Disease Control and Prevention last year showed that the health care reform law has expanded insurance coverage to 16.3 million Americans and brought the uninsured rate down to 9%. As the Hill noted, the rate was 14.4% in 2013, before the Affordable Care Act took full effect.

Sanders, as Weiner noted, voted for the Affordable Care Act in 2010. Though he's hardly been effusive in praising the law, Sanders has fiercely opposed GOP efforts to undercut it: When Republicans renewed their push to repeal the health care law late last year, Sanders said a repeal would "throw 17 million people off health insurance" and lead to the deaths of people who "don't get into the hospital when they should," the Hill quoted him as saying.

But Sanders — not unlike Weiner six years ago — doesn't hesitate to argue that single-payer offers a superior route. "What I believe in is comprehensive universal healthcare for all people," Sanders told Fusion on Monday. The inescapable subtext? The Affordable Care Act has failed to achieve that goal.

"Willingly or not, the tenor of the Sanders [argument] sounds an awful lot like 'Obamacare was a failure,'" Weiner said.

A risky bet? Weiner also took issue with Sanders' mechanism for achieving universal coverage. Under legislation Sanders introduced in the Senate, each state would have to set up and administer its own single-payer system; Clinton has warned that leaving the matter to states is a risky bet, given certain GOP resistance.

But Sanders' plan would also have the federal government administer the single-payer system in a state if that state's plan failed to meet federal standards or if its leaders simply refused to design a single-payer system, as the Sanders campaign's Warren Gunnels told the Week.

Weiner doesn't find that defense persuasive, citing the country's experience with the Affordable Care Act. The law required states to set up their own insurance exchanges or have the federal government run them; 27 GOP-controlled states haven't set up their own exchanges. (Sixteen states have also declined to expand Medicaid to poor residents under the law, taking advantage of a 2012 Supreme Court ruling that struck down the Affordable Care Act's requirement that states expand Medicaid.)

"Setting up that [state-based] construct was a mistake," Weiner told Mic. It was based on an "assumption that [GOP governors and legislatures] cared about the outcomes, not the politics."

"Is this a universal right that we believe should have universal standards, whether you're in Mississippi or Manhattan?" Weiner asked.