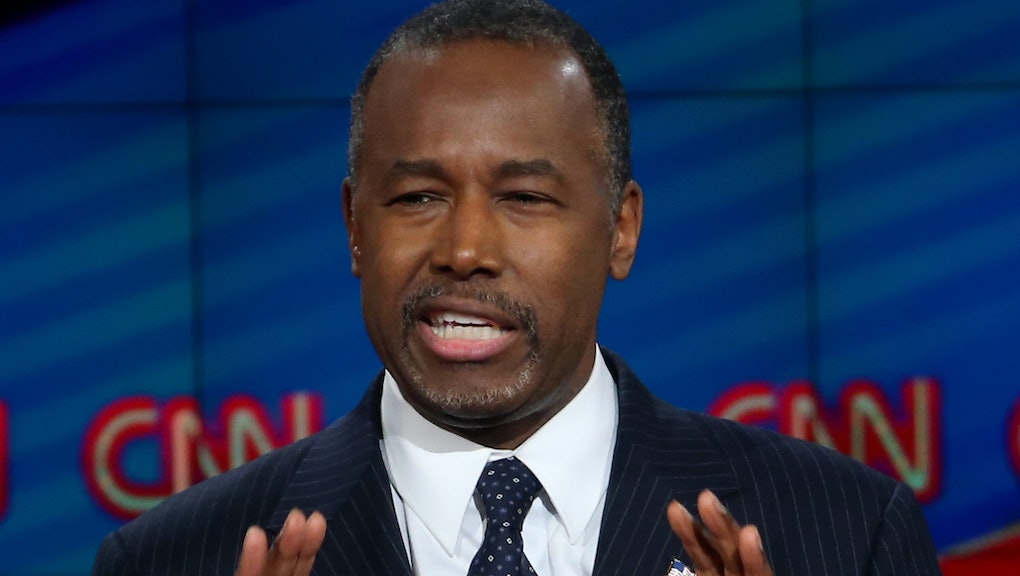 At the GOP debate on Thursday evening, retired neurosurgeon and Republican candidate Ben Carson kicked off his remarks by describing a pretty scary vision of the United States today — and it sounded a lot like the plot of the classic 1996 film about an alien invasion, Independence Day.

Carson told debate moderators Maria Bartiromo and Neil Cavuto that President Barack Obama doesn't understand that "we now live in the 21st century, and that war is very different than it used to be before ... now we have dirty bombs and we have cyber attacks and we have people who will be attacking our electrical grid."

Carson went on to paint a surprisingly vivid picture of a devastating attack on the U.S., saying, "We have a whole variety of things that they can do and they can do these things simultaneously. And we have enemies who are obtaining nuclear weapons that they can explode in our atmosphere and destroy our electric grid."

The frightening scene that Carson was describing sounded a little, uh, familiar to people on Twitter, who instantly started comparing the scenario that Carson described to the plot of Independence Day.

And some were worried that Carson had accidentally leaked the plot of Independence Day 2.

In the movie, an alien mothership descends on earth and sends smaller ships to destroy major cities around the world. To save the planet, U.S. leaders devise a plan to defeat the aliens that involves knocking out satellite communication, inserting a virus into the alien mothership that would disable its shields, then blasting it to bits with nuclear weapons miles above earth's surface.

While Carson's description of the challenges facing the U.S. today wasn't exactly a carbon-copy of Independence Day's plot, it was the imagery of large-scale blackouts and "nuclear weapons that they can explode in our atmosphere" that seemed to resonate with viewers and draw parallels to the movie.

Let's hope Carson's defense plans include turning to Will Smith to save the day when aliens attack.