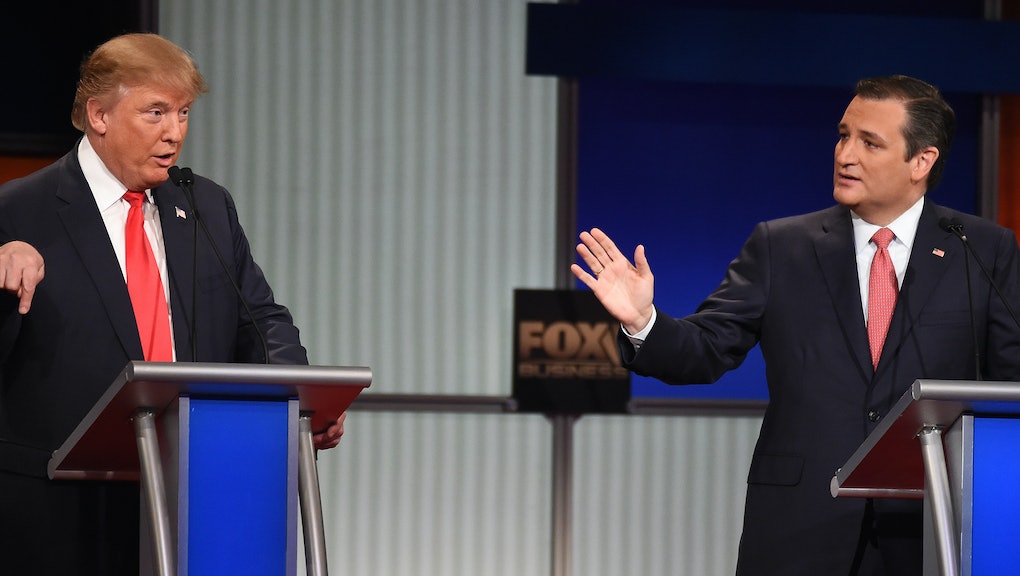 North Charleston, South Carolina — The bromance came to an end Thursday as Ted Cruz brought the fight to Donald Trump in a bare-knuckled brawl of a Republican primary debate.

The months-long truce between the two candidates was broken as verbal fireworks lit up the Palmetto State in the sixth GOP primary debate, with Cruz dropping the gloves against frontrunner Trump less than three weeks before what could be a cliffhanger contest in the Iowa caucuses.

The Texas senator lit into Trump for questioning his eligibility to run for president thanks to his birth in Canada to an American-citizen mother — and made clear he thought Trump was challenging him out of panic.

"I spent my entire life defending the Constitution before the U.S. Supreme Court, and I'll tell you: I'm not going to be taking legal advice from Donald Trump," said Cruz, who spent months avoiding direct conflict with the top dog — and building momentum of his own.

"The Constitution hasn't changed, but the poll numbers have."

Gloves come off: The gladiator-style battle — hosted by Fox Business Network at the aptly named North Charleston Coliseum — featured some of the sharpest and most personal attacks of the 2016 election to date. It took the seven top-tier candidates all over the map, from a feud over "New York values" to governors dissing senators as windbags to a game of one-upsmanship over who could lay the worst beating on the Democrats come November.

Trump came into the evening with a cushy 15-point lead in national polls, according to the RealClearPolitics average.

Trump at times seemed irked by Cruz's all-out play to frame himself as both more qualified for the White House than Trump and more palatable to Republican voters.

Things got hot when Cruz said by Trump's definition of the "natural-born" citizenship required of presidents, Trump himself wouldn't make the cut because his mother was born in Scotland.

"But I was born here," Trump broke in. "Big difference."

Cruz: "On the issue of citizenship, I'm not going to use your mother's birth against you."

Trump: "Because it wouldn't work."

The long shadow of 9/11: Trump turned the rhetorical tables on Cruz for trying to slime him for his "New York values," which Cruz defined as "socially liberal or pro-abortion or pro-gay marriage," with a "focus around money and the media."

Cruz backed off when Trump invoked Sept. 11 as having shown what being a New Yorker really means.

"When the World Trade Center came down, I saw something that no place on Earth could have handled more beautifully, more humanely than New York," Trump said to applause from the audience as even Cruz put his hands together in respect for the memory of 9/11.

Just as previous debates had Trump on the hot seat thanks to his controversial comments on immigration and national security, the rising interest in Cruz's candidacy did come at a price.

Cruz had to spend some airtime addressing a pre-debate New York Times report that he failed to disclose more than $1 million in Citibank and Goldman Sachs loans during his 2012 Senate run. Cruz copped to a paperwork foul-up, but downplayed the issue by suggesting the Times has it in for him.

Fights across the board: The fiery Trump-Cruz faceoff served as the centerpiece for an intricate swirl of interactions with and between other GOP hopefuls that also produced showers of sparks.

And not all the attacks were intramural: There were plenty of Republican red-meat barbs directed at President Barack Obama and Democratic frontrunner Hillary Clinton in both the 9 p.m. main debate and the 6 p.m. undercard featuring former Arkansas Gov. Mike Huckabee, former Pennsylvania Sen. Rick Santorum and Carly Fiorina, the onetime CEO of Hewlett-Packard.

Florida Sen. Marco Rubio bombarded Cruz with accusations of flip-flopping on everything from immigration to ethanol production to international trade: "That is not consistent conservatism — that is political calculation."

Cruz sneered at Rubio for dumping his "oppo research folder" onstage — but raised some eyebrows by saying in his own defense that "at least half of the things Marco said are flat-out false."

Rubio, in turn, got some serious blowback from Chris Christie for having said the New Jersey governor is too close to Obama on hot-button issues like gun control and the Common Core education standards.

Christie, rebutting Rubio's charges, emphasized the executive experience at the heart of his campaign pitch: "This is the difference between being a governor and a senator. See, when you're a senator, what you get to do is just talk and talk and talk. And you talk so much that nobody can ever keep up with what you're saying is accurate or not," he said. "When you're a governor, you're held accountable for everything you do."

Bush challenged Trump — though perhaps not with the intensity he showed in earlier debates — on how the United States should take on the threat of ISIS while not alienating Muslim allies and standing alone as the "world's policeman."

Kasich addressed the politically discouraged, promising to fight for those who "feel like if they don't have a lobbyist, if they're not wealthy, that somehow they don't get to play."

Ben Carson, the soft-spoken retired neurosurgeon who briefly rivaled Trump in popularity before his campaign organization started to rip at the seams, went for some easy humor before he plunged into a description of a wartime doomsday scenario straight out of the movies.

"I'm very happy to get a question this early on. I was going to ask you to wake me up when that time came," Carson said.

Trump wins, says... Trump: In a post-debate spin room swing with his wife and kids, Trump characteristically named himself victor by acclamation: "Every single online poll has me winning," he said.

He said he wasn't worried about Cruz or anyone else in the run-up to the Feb. 1 Iowa caucuses. That doesn't mean he won't be sinking a chunk of his fortune into his mission, including commercials, although he said he had no plans to run ads directly attacking Cruz.

Overall, "I'll be putting up probably $30, $40 million before the primaries," Trump told reporters of his spending plan.

When it comes to money, he said, "I have unlimited. I have a lot."

There's one more GOP debate scheduled before the first votes are cast, plus ground games to perfect in battleground states, air wars to be fought, and it's all happening against the backdrop of a bone-deep dispute over the direction of the Republican Party.

Whether even "unlimited" can prove sufficient to propel Trump all the way to the nomination is the question everyone's asking — and no one can answer.