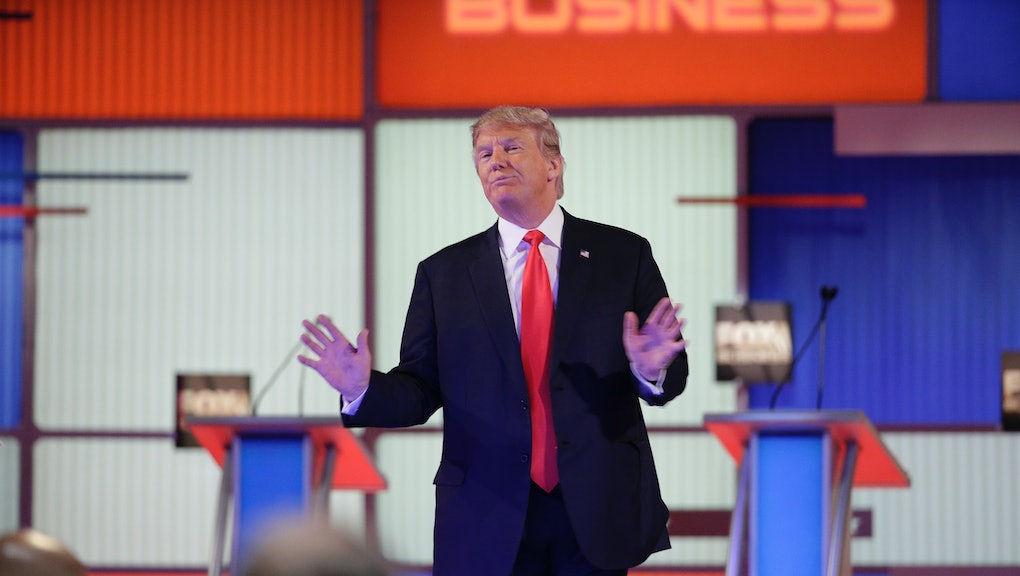 Donald Trump Net Worth: This Is the Extent of "the Donald's" Wealth

If there's one thing GOP frontrunner Donald Trump wants the American public to know about him, it's that he's a very rich, and very successful, businessman. Whether it's through a reality show like The Apprentice, or a bestselling book like The Art of the Deal, "The Donald," as he's commonly known, cares deeply about the public perception of his business acumen and his overall worth. But just how much is Trump worth?

If you ask Trump, it's in the neighborhood of "TEN BILLION DOLLARS," Trump announced — in all caps, no less — in a campaign statement in July 2015, when a detailed review of his fortunes was disclosed by the Federal Election Commission in the same month, according to Business Insider. The unnecessary emphasis was, in part, because he believes his fortune is too "massive" to be detailed in a financial disclosure form.

However, in an extended profile into the real estate mogul's fortunes, Forbes revealed in October 2015 that a better estimate of Trump's net worth was about $4.5 billion. For 2015, that placed him at 121 in the Forbes 400 — an annual list of the 400 richest people in America. The publication came to this conclusion after a deep-dive into his fortunes, which they also detailed.

"After interviewing more than 80 sources and devoting unprecedented resources to valuing a single fortune, we're going with a figure less than half that — $4.5 billion, albeit still the highest figure we've ever had for him," Forbes editor Randall Lane wrote.

Trump was also given a self-made score of 5 by Forbes' 10-point scale estimate. According to Forbes, a score of 5 indicates someone who "inherited small or medium-size business and made it into a 10-digit fortune."

The magazine noted that it's had a long history with Trump and his net worth, as he's constantly valued himself much higher than he is actually worth. He even told the magazine in September that he would "look better if I'm worth $10 billion than if I'm worth $4 billion." Trump's argument is that Forbes does not account for the "Trump brand," something that the magazine considers to be "phantom billions" and added that his worth should be calculated in the same way as every other member of the Forbes 400.

Furthermore, the Federal Election Commission's disclosures form on the real estate mogul revealed other key insights about his worth. According to CNN, of the 515 entities in Trump's overall brand, 276 of them have "Trump" in their name. In an additional report from USA Today, the forms showed that Trump owes about $50 million in loans for mortgages on several Trump buildings, though his golf clubs alone rake in about $50 million annually.

Regardless of Trump's arguments over his net worth, going by Forbes' estimates still gives him an impressive amount of money. To put this in perspective, if Trump's net worth were a country, he would be the 158th richest country in the world — ahead of 35 countries' GDP. He'd slip in right before Swaziland, and just behind Togo. And if someone were to weigh his money in the form of $100 bills, it would be roughly 90,000 pounds, or 45 tons.

Additionally, when compared to presidential candidates for both parties, his net worth is far and away the highest. In a report from GoBankingRates, Trump's closest competitor's are former Hewlett-Packard CEO Carly Fiorina and Democratic frontrunner Hillary Clinton, worth an estimated $58 million and $45 million, respectively. If Fiorina wanted to match his net worth, she'd have to earn about 78 times what she's presently valued at.

In other words, no matter how much he argues his net worth, his financial footprint is, unequivocally, HUGE.