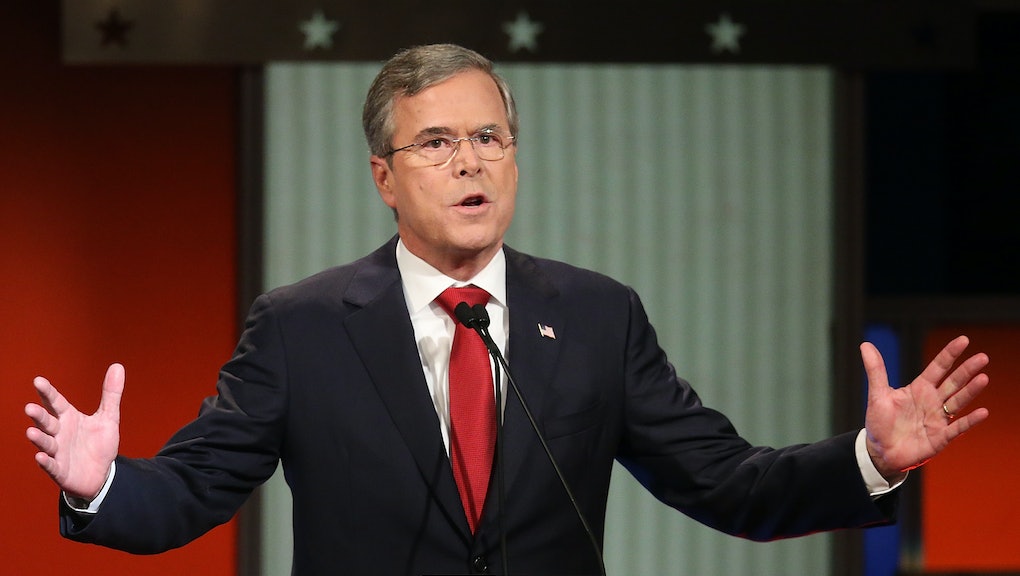 The sagging presidential campaign of former Florida Gov. Jeb Bush rolled out the endorsement Friday morning of Sen. Lindsey Graham (R-S.C.), who withdrew from the presidential race last month after struggling to muster any support in the polls.

At a press conference in South Carolina on Friday, one day after the Republican presidential debate in North Charleston, Graham touted Bush as the candidate with the "most comprehensive and well-thought-out" plan to defeat the Islamic State group, also known as ISIS, lauding Bush for opposing frontrunner Donald Trump's proposal to temporarily ban Muslims from entering the United States.

The endorsement: "I can't think of a worse idea in terms of how to fight and win this war," Graham said. "Many of the people running for president are nearly silent on this issue," he added, saying that Bush "made the most sense" in discussing the topic at Thursday night's debate.

"Last night, [Bush] demonstrated somebody who, in my view, is ready on day one to be commander in chief," Graham said.

Speaking after Graham, Bush praised the senator as "a patriot" and described himself as a "student" of Graham's on foreign policy issues.

"What's at stake is our way of life," Bush said of the fight against ISIS, echoing Graham's argument that the terror group poses an existential threat to the U.S.

What it means: While Graham won't deliver Bush a large Republican constituency — he dropped out of the race in December at 0.5% in the national polls and wasn't doing much better even in his home state — the Bush campaign hopes to tap Graham's fundraising and organizing network in the Palmetto State, whose closely watched primary follows the contests in Iowa and New Hampshire.

Bush currently stands at fifth place in South Carolina with 8.5% support, according to the RealClearPolitics polling average.

Bush nabbed endorsements from some key Graham backers after the senator quit the race, but given Bush's dire position in the polls, it was unclear whether Graham himself would publicly offer his support, particularly with a more viable candidate like Sen. Marco Rubio of Florida sounding many of the same hawkish foreign policy themes that animated Graham's bid.

Little to lose: Sitting at about 5% support nationally and struggling to break into double digits in the crucial New Hampshire contest, Bush understandably finds a high-profile endorsement like Graham's welcome news. But the endorsement may only reinforce the narrative that Bush is a creature of an ossified, out-of-touch GOP establishment. Though Graham has often stridently hawkish views on national security and foreign policy, he's also broken with conservatives on issues like immigration reform and climate change, angering right-wing constituents.

Alluding to Trump and Sen. Ted Cruz's anti-immigration rhetoric, Graham praised Bush on Friday for not attempting "to get ahead in a contested primary by embracing demagoguery."

Trump, for his part, mocked the Graham endorsement on Twitter, noting Graham's low poll standing when he left the race:

With Trump and Cruz leading in the polls, Bush has struggled to convince conservatives that he's in tune with the base's sentiments, and given that Trump has only grown his lead since terror attacks in Paris, France, and San Bernardino, California, there's little compelling evidence that the national security pitch Graham offered Friday will revive Bush's bid.

Too late? As Graham announced his support, the Bush campaign found itself dealing with a decidedly less flattering bit of news: Politico reported, based on interviews with upwards of 20 Bush donors, that many of Bush's financial backers are quietly waiting for the moment they can jump ship and lend their backing to candidates like Rubio.

"I'm resigned to it being over, frankly. It's really disappointing," a Bush supporter on Wall Street told Politico. "I'd urge him to get out after New Hampshire if he doesn't do well, but he probably won't."