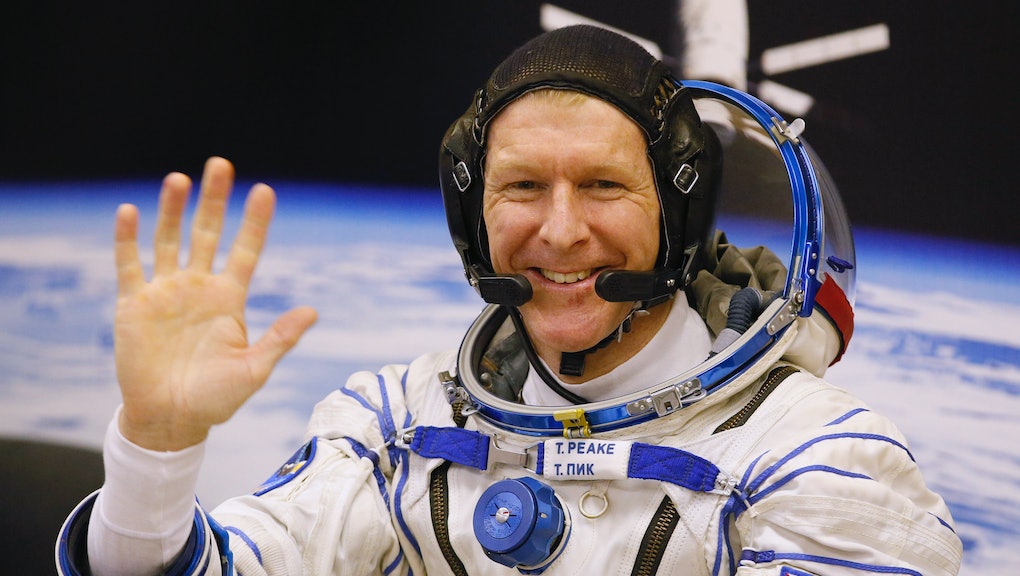 Who Is Tim Peake? The Full Story on the First Official British Astronaut to Spacewalk

Britain made intergalactic history Friday as the European Space Agency's Timothy Peake became the country's first official astronaut to do so, the BBC reported. He is joined by NASA's Tim Copra in Expedition 45 to replace a failed electrical box on the exterior of the International Space Station's Quest airlock. In the approximately six-hour spacewalk, the two had to travel about 164 feet, or about the size of an Olympic pool, in total darkness, BBC reported. Peake won't return to Earth until June, the Guardian reported in November.

This is the 35th spacewalk around the airlock, the 192nd for maintenance of the station, but the first for Peake, according to NASA. "Popping outside for a walk tomorrow," Peake tweeted Thursday. "Exhilarated — but no time to dwell on emotions." To Peake, a spacewalk is the "pinnacle of an astronaut's career," according to the BBC. In 2009, Peake became the first Brit to join the European Space Agency's roster of astronauts, according to Peake's website.

Who is Peake? Peake was born in Chichester, England, in 1972, and graduated from the University of Portsmouth with a bachelor of science degree in flight dynamics and evaluation, according to his website. He is married to Rebecca Peake, 41, and they have two sons, according to the Daily Mail. "We are all going to miss him desperately and we'll just try to make the time pass as quickly as we possibly can," Rebecca Peake said, according to the Daily Mail. "I know Tim wouldn't want it to pass too fast!'

Flying has been a big part of Peake's life. He is a former army major and helicopter test pilot who's done tours in Afghanistan and Bosnia, the Guardian reported in October. He joined the Combined Cadet Force while in school and became an Army Air Corps officer in 1992, according to his site. He qualified to teach helicopter flying in 1998. Over the course of his military career, Peake has racked up over 3,000 hours of flying time.

Peake applied to the ESA with over 8,000 other people; for a full year, Peake went through online questionnaires, medical tests and intensive interviews, the Guardian reported. He was chosen out of 10 finalists. "I went into the selection process thinking my chances were very slim," he said, according to the Guardian. He has since trained in Germany, Japan, Russia and the United States. Although an astronaut, he's done several missions exploring caves and living underwater in Sardinia and Florida, according to his website.

But space isn't the only place Peake trains for. He's training for the London marathon by running on the treadmill at the ISS, according to CNN.

The mission: In December, Peake flew to Baikonur Cosmodrome, a Russian launch complex where Sputnik 1 did its first mission for final preparations, the Guardian reported. It would take six hours for the Russian spacecraft Soyuz to ship Peake and his team, which includes Kopra and Yuri Malenchenko, to the ISS, the Guardian reported.

"I'm really looking forward to this mission. In the six years I've been with the space agency you invest so much training time and emotional energy. It's a personal commitment, and it's a family commitment," Peake said, according to the Guardian.

The Soyuz launched Dec. 15. "Hope you enjoyed the show," Peake said in his sound bite. The launch was met with digital good luck messages from the Queen and Paul McCartney.

The spacewalk began at 7:56 a.m. and went until 12:34 p.m., according to the Guardian. Using their arms, the two Tims — led by Kopra — moved along the side of the station. Kopra's last is to install a non-propulsive valve and Peake's is to route cables and stow the failed unit, according to the Guardian. During the spacewalk, Kopra gained a little bit of water in his helmet.

Peake is not the first British-born person to ever enter space, just the first "official" astronaut. In 1991, Helen Sharman took an eight-day orbit, but for a private company, the Guardian reported. There have also been previous astronauts who have hailed from Britain, such as Michael Foale and Piers Sellers, but they either changed nationalities or had dual citizenships, the Guardian reported.